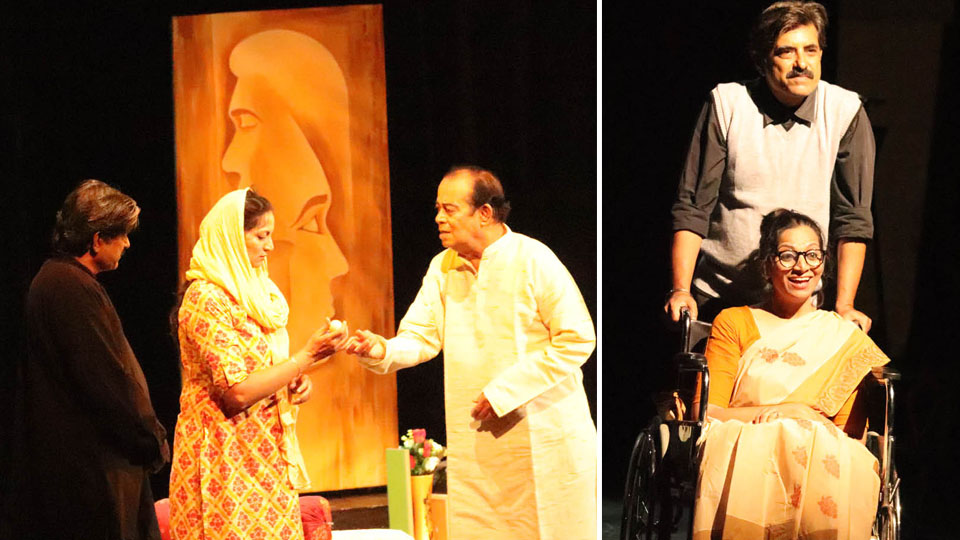 A play on famous Punjabi woman writer, a poet, a revolutionary and recipient of many prestigious awards in literary fields, Amrita Kaur/ Pritam Singh, was staged successfully at RamaGovinda Rangamandira in city by Parivarthana Ranga Samaja, Mysuru.

In true sense Amrita was a rare combination of beauty, intelligence and sensitivity in her own way. Based on her ability, capacity she started penning her feelings romantically through her poems in Punjabi initially and turned herself into a serious writer, a rebel and a trendsetter. With all her qualities and capabilities, her personal life remained as a big puzzle for many — but those who could see her closely literally loved her intensely.

The Kannada drama titled ‘Nanna Pritiya Amrita’ focused on her love life and different shades of love. In a way, her entire life is an unprecedented yet incomplete love, full of challenges and obstacles. Yet the subtle expression of her eternal love and the abundant love she receive at the later part of her life remained immortal.

Prof. S.R. Ramesh along with his team members attempted to concentrate on the special aspect of Amrita’s love life through the play. The play starts with the entry of the main character Amrita Pritam in which she narrates her childhood atmosphere, the cordiality between Hindu & Muslims and then the ill-effects of India’s partition based on religion.

Tejasvini Jois played the role of Amrita. She was married to Pritam Singh in the year 1935, who was a trader and was unaware of  poetry, sensitivity, which made Amrita unhappy and their marriage was a big failure which ended in the year 1960.  Amrita had two children one daughter and a son from this marriage.

At that time, Amrita got attracted towards the Urdu poet Sahir Ludhianvi — but that remained one-sided love. It was true that Sahir was meeting Amrita frequently in many programmes and both were admiring each other’s creative writings, but he preferred to remain silent and never responded to Amrita, for the reasons best known to him.

The dark side of Independence was the partition of India, which led to many unhappy rather brutal happenings, took place. Especially the women were main victims. All these happenings created deep impressions on the lives of people especially a sensitive person like Amrita.

That was the time the option was given by the Government to shift or remain in either India or newborn Pakistan. Amrita preferred to shift from Lahore to New Delhi and worked for All India Radio. Her writing continued along with household chores caring for her two children and managing the job. Her assertive writing received attention and she started being noticed, received recognitions at literally levels and many awards. Yet the social mindset remained unhealthy and Amrita was over criticised for her reforming thoughts in her writings as well as in her personal life. Though her personal life remained unsatisfied and unsuccessful her success in outward world of literature compensated largely. However, in the play more focus was on her love life and experience.

The three main characters namely Amrita, Sahir and Imroz were all inborn talented artistes and all the three were equally capable of creating their own place in their fields. Sahir made his name in penning poems/ songs and became popular in Bollywood as well as in special conferences, where Amrita was also participating.

In the second part, Sahir narrates his life story through monologue that moves the play further. M. Dwarakanath in the role of Sahir clears certain points clear through which the viewers come to know that he was deeply in love of his mother who was ill treated by his father, was deprived of her legal rights financially hence he was hating his father. He wanted to keep his mother happy and never wanted to marry with anyone. However, with all such views, he was involved with Sudha Malhotra, a playback singer of his time. This made Amrita unhappy.

All these incidents were made known to viewers through different modes of communication such as telephone calls, flashback etc. May be Amrita has no courage to force herself upon Sahir and could not cope with her husband Pritam — separation and staying lonely along with two children was the only solution.

At this juncture, another talented & loveable person, a good painter by name Imroz enters Amrita’s life. Amroz is much younger to Amrita but is madly in love with her. Though there are innumerable definitions about love, it is quite difficult to define his love towards Amrita which was beyond description. Many a times even Amrita has expressed her feelings saying that — ‘pyaar ko pyaar hi rahane do, use koi naam na do.’

For Imroz, Amrita was an ideal idol of love — like Muse, which is Greek word that means Goddess of Art, Music — & it is believed that those artistes are blessed by these inspirational Goddess so that their creative art reaches the topmost position.

However, for Imroz, Amrita was his Universe which he expressed in beautiful way. Once when Amrita tells him to go around the world to see the outer world and if he finds all right then come back to her. While responding to Amrita’s words Imroz’s instant reaction was indeed novel- he takes several rounds around Amrita and tells her that ‘She is his Universe.’

In turn Amrita was also finding it difficult to give the name to Imroz’s selfless love. He was like a father, like a brother, like a son, like husband and what not! For Imroz, Amrita was the ultimate in his life. He never tried to force or encroach upon Amrita’s  feelings, her space, her habits and her love towards Sahir. Imroz was there to take care of Amrita’s daughter & son as well. Amrita had the habit of waking up at any time in the night to write and Imroz will silently prepare a cup of tea for her.

In turn, Amrita had changed herself that who never knew cooking has started preparing chapattis for Imroz — such simple acts watered their subtle feelings about each other. From Imroz side there were no grumblings, no complaints only cooperation and support whenever needed!

Such an unspoken, unwritten understanding and total devoted love, committed love is unimaginable. However, the true love is that where there is no dualism. Imroz had no separate existence! Seeing his selfless non-expecting behaviour & expressions, he was rightly labelled or compared with that of a Moth who knows only to jump and die in the flame. Indeed, he was madly in love with the flame and who without blinking eyelid is ready to jump into the burning flame without even thinking of ending of life.

Actually as an artist and good painter by himself, he could have gained more popularity outside but he contented himself by remaining as a shadow of Amrita, designing covers for her books and drawing her portraits! For more than 40 years, both of them lived together when the concept of ‘live in together’ was no in existence at all.

Amrita was deeply moved with this sort of relationship and was thinking of getting his association at an early stage of life. She had written a poem upon Imroz titled — ‘Shyam ka Phool’ — which means the flower that blossoms in the evening as he entered in her life at the later age — the evening of her life.

Imroz was like a dream come true though late in life. Imroz was the one who took her care during her illness. She always wanted to preserve his affection forever — not only in one birth but in future births as she wished to remain with him in all the births. Imroz used to call her as ‘Barakate,’ which means abundance — for him Amrita’s presence, was giving bountiful of happiness.

The peak of Amrita’s life as well as the play is the uncommon love between herself and Imroz. The state of mind of Imroz is very peculiar that he felt Amrita’s existence even after her death. Until his death, Amrita was with him — no one else!

Tejasvini Jois did her best in the main role of Amrita, the technique adopted by director to deliver dialogues in Kannada as well as Urdu and Hindi was little difficult. But the abhinaya aspect of the role was so high that the pronunciations of Urdu words, Hindi lines remained overlooked. In the role of Sahir, Dwarkanath was impressive. Yet Manjunath Upadhyaya in the role of Imroz was praiseworthy — more than his words or dialogues, actions, his body language was very powerful.

Little more attention could have been provided for Hindi/Urdu dialogues delivery. Secondly, the story was moving forward through lengthy monologues, whereas the drama should move through dialogues with each other. The small monologues are desirable whenever necessary but lengthy monologues spoil the interest and patience of viewers. Another subtle point was while presenting Punjabi, the characteristic of Punjabis that they are aggressive, assertive and very bold in their expressions could have been taken into account through their forceful body gestures.

Similarly, the light arrangement could have been brighter as many incidents could not be enjoyed due to less light on stage. For that matter, even the participating artistes were finding it very difficult to enter the stage and occupy proper place.

The efforts of entire team members namely Direction, screenplay and design by Prof. S.R. Ramesh, Music – I.G. Narasimhan, Publicity Design – Harsha, CAVA/ H.K. Vishwanath, Props. Manju Upadhyaya, Brochure Col/ B.S. Satish & Madhav Khare, Dr. Ningappa, Shruthi Bharadwaj and last but  not the least, Production Incharge Madhav Khare  deserve appreciation, mainly because all are dedicated to Parivarthana Ranga Samaja as volunteers and work only for the pleasure of creativity not keeping money or profit in mind. It is a fact that only non-commercial yet professionally experienced members can produce and present qualitative programmes in the field of performing art.

Any stage performance, especially presenting a drama is not successful only by the contribution of actors who are on the stage because it is teamwork. The people behind the screen, the music arrangement coincidental with the occasion,  stage arrangement, light arrangements and most importantly  managing the production side of the play as per the guidelines of Director are equally important.