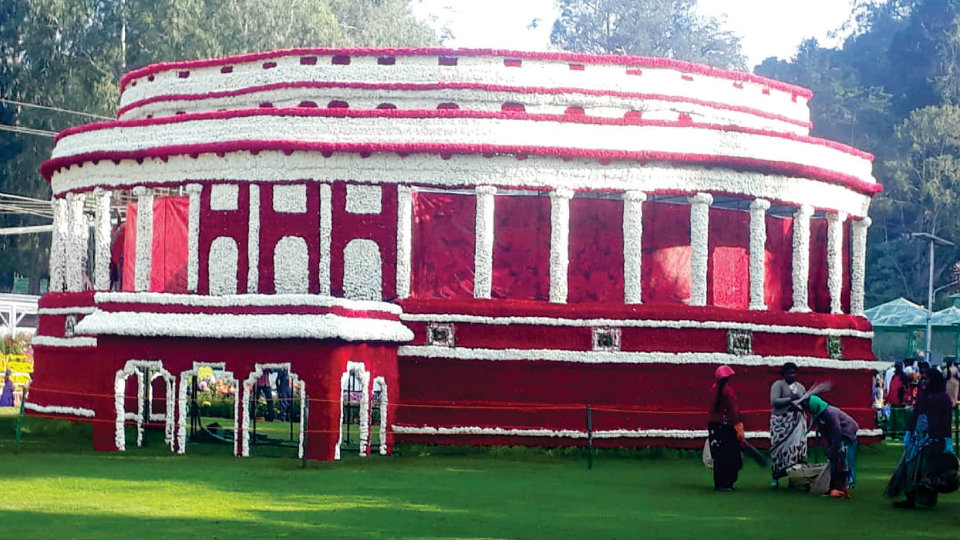 A 23-foot high floral replica of the Parliament building made of nearly two lakh red and white carnation is the cynosure of all eyes at the 123rd Flower Show inaugurated by Tamil Nadu Governor Banwarilal Purohit at the Government Botanical Gardens in Ooty yesterday.

“It is indeed a matter of pride and happiness that the people of Nilgiris district have played host to the show for several decades, thus exhibiting their love for nature and their appreciation of beauty,” the Governor said in his inaugural address.

The Garden has a sprawling expanse of 22 hectares and attracts around 30 lakh tourists every year, hosting an enormous collection of over 2,000 species of flora, he said.

It is the enormous variety that makes the Flower Show a unique event and there are more than 150 varieties of cut flowers, various kinds of tropical and temperate vegetables and tropical and temperate fruit on display. 30,000 potted flowering plants have been specially arranged for the five-day show (May 17 – 21).

NOTE: Apart from this famous Botanical Gardens and Sims Park in Coonoor, there is also a Garden maintained by Karnataka Government in Ooty called “Karnataka Siri Horticulture Garden” which has been featured in today’s Weekend Star Supplement. Read Here. —Ed