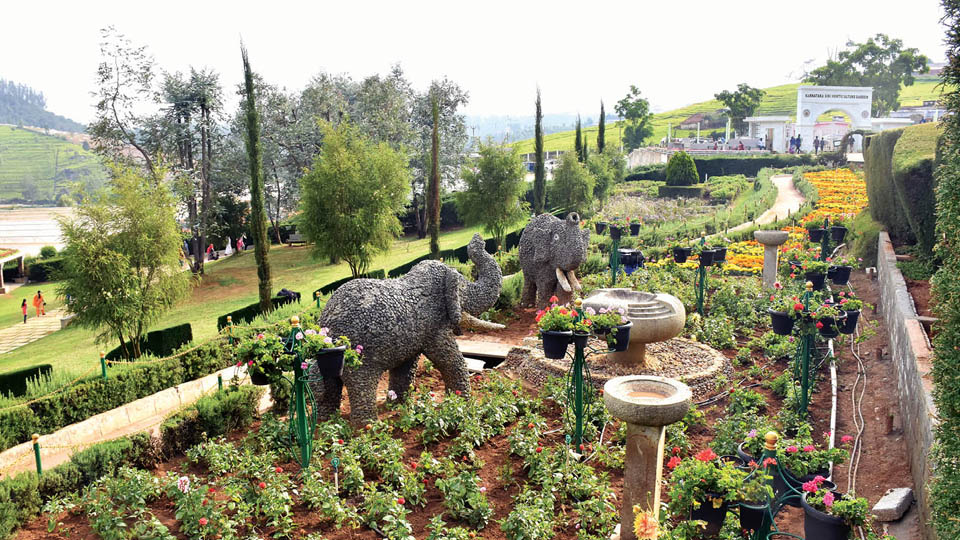 If Karnataka and Tamil Nadu have been fighting with each other over Cauvery waters, they have come together to establish ‘Karnataka Siri Horticulture Garden’, Fern Hill, the second largest public garden in Ootacamund (Ooty) which is known for its wealth of Gardens and Parks. The Park, a gift of the Wadiyars of Mysore, has come as a new-era tourist attraction and paves way for inter-State co-operation through tourism. Read on and walk through the Garden with this Weekend Star Supplement and learn how Ferntastically (Fantastically) a mundane potato garden is being transformed into a green space rich with flowers, lakes and landscapes.

Ootacamund or Ooty’s ‘Fern Hill Palace’ has an important Mysuru connection. The property was bought for Prince Chamarajendra Wadiyar by Mummadi Krishnaraja Wadiyar. The Fern Hill area is still known as the Mysore area and it was a status symbol for India’s Princes to own a Palace at Ooty.

Ooty is also known for another Fern Hill — ‘Karnataka Siri Horticulture Garden (KSHG)’, an inter-State Garden of Karnataka Government that was established in over 38 acres in ‘Fern Hill’ area. The place was open to public viewing last year on January 8 and till the end of January this year, 13 lakh tourists have visited this Garden.

It is now the second largest public garden in this hill town which is known for its wealth of Gardens and Parks and has come as a new-era tourist attraction and paves the way for inter-State co-operation through tourism.

Established on land which was once the property of erstwhile Mysore kingdom and gifted to the Karnataka Government by the Maharaja in 1964, the KSHG is spread amidst slopes, valleys, check dams, tea gardens, herbal gardens and woods. Frigid Zone glass house, meadows, Italian garden, small lakes, poly green houses and space for Sandino sheep and a specialty of the Nilgiris make up for the scenic elegance in the Garden.

Joint Director of Horticulture and Head of Gardens, Government of Karnataka, H. Jagadeesha, who is overseeing the development of KSGH, told Star of Mysore that Karnataka has developed this picturesque landscape in the Nilgiris district of Tamil Nadu.

Fern Hill was part of the Maharaja’s Summer Palace and for decades it was used as a parent potato garden that supplied seeds to farmers in Kolar, Hassan, Tumkur and Bengaluru Rural. It was also used for horticultural research before independence when the area came under the Mysore royal family. After independence, it went to the Karnataka Government.

Noted botanist and landscape architect Gustav Hermann Krumbiegel, who served as a Superintendent of Lalbagh Gardens in Bengaluru from 1908 to early 1930s, was even sent there for research here, he said. Jagadeesh further said the area was chosen for researching on potato tuber production originally, but a pest attack left the area in disuse for several decades. Since it lay unused for a long time, and Ooty is a tourist destination, the Horticulture Department decided to develop a Garden there. The area also neighbours the iconic Fern Hill Palace, now part of a heritage resort, owned by the erstwhile Mysore royal family.

Horticulture expert M.H. Mari Gowda had in the 1940s requested Maharaja Jayachamaraja Wadiyar to arrange for potato cultivation as sourcing seeds from Shimla and Jalandhar was becoming difficult. It was then that the Maharaja invested in the land and set aside for growing potato.

Over the last 10 years, under the care of Botanists from Karnataka, it has been transformed into an oasis of sorts, with flowering plants such as Alstroemeria or Princess Lilies, Begonia, Orchids and Fuchsia. Its landscape includes hillocks, valleys, and six lakes. Visitors are allowed to take pictures and selfies on these scenic spots.

This Garden was built at a cost of Rs.12 crore as symbol of friendship between Karnataka and Tamil Nadu. This Park is called Fern Hill with the main intention to attract the tourists with an expected 25 to 30 lakh tourists visits.

About 75 different kinds of flowers have been planted and Frigid Zone Glass House situated since 1979 is home to flowers that grow only at an altitude of 7,000 feet above sea level. It also has rose garden, and flowers like Camellias and since Ooty has a temperate climate, plants like Agapanthuses, Calla lilies, Germaniums, and Red Hot Pokers are attracting visitors.

The Siri Garden is most famous for topiaries that were created nearly 60 years ago, covering an expanse of 10 acres. Three other Gardens within the space — Italian Garden with sculptures and flower arrangements inspired in 15th century villas of Rome and Florence, the Maze Garden, which is an outdoor labyrinth wherein passages are divided by vertical hedge walls and the Tea Garden — are among the attractions. The ‘Maze Garden’ is made up of Cyprus plants that are shaped to perfection to divide into passages.  The ‘Maze Garden’ culture that evolved from Europe, is intended to confuse visitors inside the natural maze chamber and offers fun activities and recreation.

The Italian Gardens and Sunken Gardens with Amphitheatre facilities that are developed in the Park are also attracting large number of visitors. The Government has allowed these Gardens and the Park to use for film and tele serial shooting, to hold pre-wedding receptions, birthday parties, and to hold other family events on rental basis.

The Gardens are open to the public for educational programmes, tours, and special events, particularly weddings which have taken place for decades on the Wedding Lawn.

There are plans to set up ‘Nilgiri sheep forest’ and to rear swans aplenty in the lakes along the walking paths. Plans have been made to rear 20 Nilgiri breed sheep (Neelagiri Giddathali) in around two acres of land.

One of the major constraints for the visitors of this hill station is parking. To address this, KSHG has developed the parking lot around three acres of land to accommodate 600 vehicles to get to the park at a time. Plans have been made to put up signboards of this Garden at all four entry and exit points besides provide wide publicity at bus stands, hotels and also other public places.

Over Rs. 12 crore-project was in progress for the past 10 years and development activities have intensified since 2014. The present garden was developed in 60 per cent of the land (25 acres) in the first phase and works on construction of hanging bridge between the two tea estates, water tower, information centre and a canteen are under progress. 50 per cent of the erection of pillar works of hanging bridge has been completed.

Other than this, the Karnataka Government has been releasing Rs. 2 crore every year for development of this Fern Hill and this will be utilised to add more entertainment-based facilities such as children’s play area, water tower, aquarium, to make further improvements in topiary garden, Italian garden and maze garden.

The second phase of the garden development will have a viewpoint, giving tourists a bird’s-eye view of the garden, provide eco cars to traverse around the garden and make more slopes than steps to enable tourists to explore the garden tirelessly.

Phase II will also have nearly five water bodies including a chasing fountain, a pool for aquatic species, one for ornamental fish and two dedicated for collection of water through rain water harvesting.

Entry to Siri Garden for public was free for the first three months till March 31 last year and now the Department is collecting Rs.30 from each visitor (children Rs. 15).