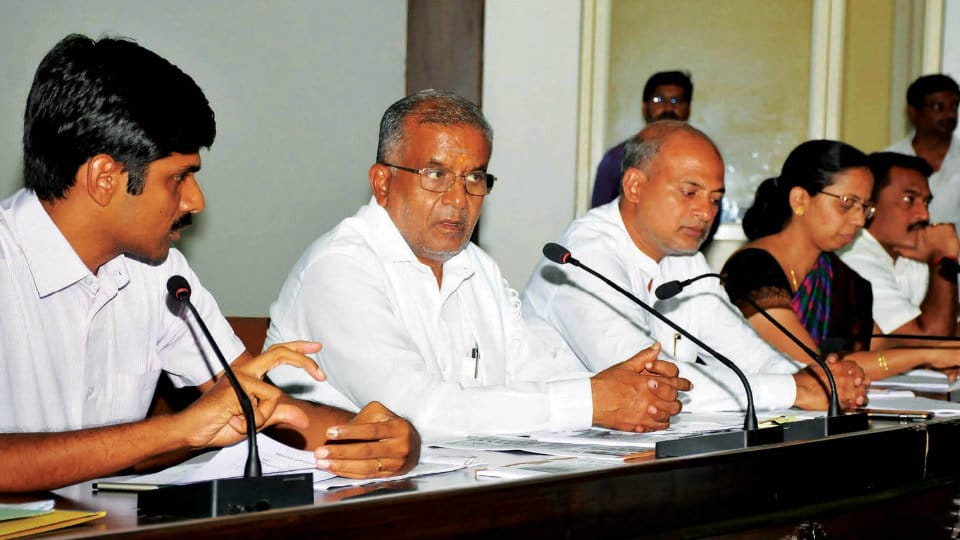 Mysuru: Announcing that he will be touring the district once the LS Polls Model Code of Conduct gets over, District Minister G.T. Devegowda (GTD) has warned that action will be taken against officials for any laxity in addressing drinking water woes in villages.

Presiding over a meeting of officials at the ZP Hall here on Thursday, GTD said that Chief Minister H.D. Kumaraswamy, who addressed DCs and ZP CEOs of all districts through a video conference on Wednesday, had directed them to take all necessary measures for tackling drinking water problem in villages. Accordingly, the officials in Mysuru district too must act and address drinking water issues, especially in villages.

Stating that he was told by DC Abhiram G. Sankar that the District Administration has Rs.21 crore for taking up drought relief measures, the Minister said that every taluk in the district has been released up to Rs.50 lakh to tackle drought.

Expressing disappointment that officials had failed in the appropriate use of this fund, Devegowda attributed the drinking water problems at Hinkal and Tavarekatte to official apathy.

Asking the ACs, Tahsildars, EOs and other Revenue Officials to visit villages, he instructed the Administration to make a list of villages which have received scanty rainfall and to clear Water Tanker bills.

Stating that there were complaints on bogus Water Tanker bills, the Minister said that he will press for an exclusive Water Authority for Mysuru.

Continuing, Devegowda said that there were complaints on the working of Watermen at Hinkal and other places and as such the apathetic Watermen must be replaced by someone who have genuine concerns for addressing water problems.

The Minister also directed the officials to submit a proposal on the additional number of Overhead Tanks required for the district.

Mysuru Taluk EO Lingaraju said that a few houses in Hinkal have large-sized pipes, which has hindered water supply to other homes in the locality. The EO further said that the Watermen have been tasked to see that these large pipes are removed.

Pointing out that it was the responsibility of MUDA to ensure drinking water supply to layouts formed by it, he said that the MUDA turning away from its responsibility was not correct.

Tourism Minister S.R. Mahesh took the officials to task for failing to utilise funds released by the Government for addressing drought.

‘No problem for people of Kodagu this monsoon’

Later speaking to reporters, Tourism Minister S.R. Mahesh, who is also Kodagu District In-charge Minister, said that the people of Kodagu need not panic over floods as the Disaster Management Department has not predicted any natural calamity this monsoon.

Noting that Mysuru and Bengaluru will get drinking water if it rains in Kodagu, Mahesh said that good rains was vital for Kodagu and neighbouring districts.

Pointing out that Chief Minister H.D. Kumaraswamy and CLP leader Siddharamaiah had visited Kodagu and stayed there for a couple of days, Mahesh maintained that with their stay, the leaders have sent a message that Kodagu is safe for tourists.

The Minister also appealed not to make unnecessary speculations on the impact of monsoon rains in Kodagu.