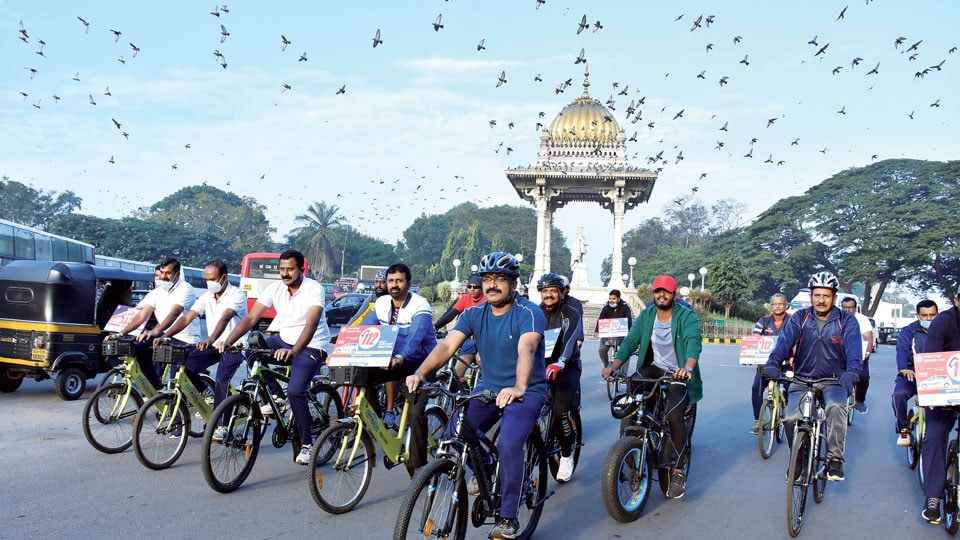 Following the launch of 112 Helpline, a Pan India single number Emergency Response Support System (ERSS) for citizens in emergencies or crisis, the City Police this morning took out a Cycle Jatha on five different routes in city, in association with a host of organisations in order to create public awareness on the new Pan India Helpline number.

The rally was held as part of the City Police’s Crime Prevention Month with support from organisations such as Mysuru Cyclists Association, Trin Trin, Kreatement events, the Thought School, Columbia Asia Hospital, Red FM and University of Mysore (UoM).

City Police Commissioner Dr. Chandragupta and MLA L.Nagendra jointly flagged off the rally in front of Kote Anjaneyaswamy Temple at the Palace North Gate. The rally had the theme ‘Mysuru – My City – Safe City – Call 112’, a Pledge Board of which was signed by Dr. Chandragupta at the start of the rally.

Speaking after flagging off the rally, the Top Cop said the City Police are observing Crime Prevention Month from Dec. 1 to 31 and as part of it, a host of public awareness programmes are being held across the city throughout the month. Underlining the importance of the rally, he said that the people can call 112 to avail Police services during any emergencies or crisis.

Pointing out that an Emergency Response Police vehicle has been launched in the city as part of ERSS, he stressed on the need for widespread campaigns for sensitising public on the importance of calling Namma 112 Helpline during any emergency. He said that handbills on Namma 112 Hepline are being distributed among the public in order to educate and sensitise them. He also appealed people to join hands with Police for building a healthy and responsible society.

MLA L. Nagendra, in his address, said that Prime Minister Narendra Modi, as part of an effort to ensure safety and security of every citizen in the country, launched the Pan India single number. Maintaining that the Helpline is part of an initiative to bring about unity among different sections of the society, he said that the public must not hesitate to call this Helpline when they are caught in an emergency situation or are facing safety crisis.

More than 250 persons from different fields, including athletes and sports persons from UoM, Traffic Wardens, Home Guards and members of a few other voluntary organisations, took part in the rally. More than 110 Trin Trin bicycles were used for the rally.