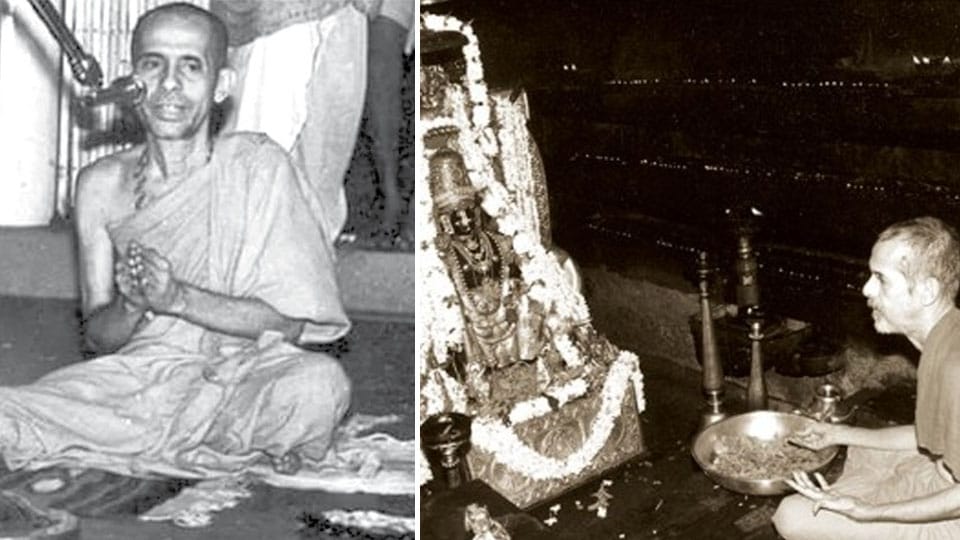 This happened during the second tenure of Paryaya of late Pejawar Swamiji in Udupi in 1968-70. A little interesting background to the occasion.

I was serving as District Publicity Officer of South Canara since mid-1964. That was the time when Indira Gandhi as Prime Minister had introduced what is now known as 20-Point Programme to review every month the progress made under various Government Schemes.

Accordingly, each District Collector in the country had to send progress report strictly after conducting meeting with the various Heads of the Departments. One of the important items of 20-Point was the progress made under Family Planning Programme. Though progress under other 19 Economic Schemes was fairly high, Family Planning (FP) progress was lagging behind very poorly, the reason being large number of Christian and Muslim population were against FP. Hence, we had mounted a large Publicity Drive making use of all techniques to reach out to the people in general, particularly men to undergo simple Vasectomy surgery which was very easy and popular.

A very short, interesting and effective cartoon film done by Films Division was being screened in the theatres as well by our Film Unit in rural areas. In order to attract people, we were screening some attractive Documentaries and in between we would show Vasectomy cartoon.

So, that was the time when we had organised Family Planning Fortnight in Udupi and surrounding areas. I had obtained a beautiful Documentary of M.S. Subbulakshmi’s music concert at United Nations and one of the song sung was on Udupi Krishna which was soul-stirring. This made me to screen this in Krishna Mutt for which I met Pejawar Swamiji who immediately agreed and also arranged public to attend the show.

When I told him about FP Publicity Drive and sought his permission as to include Vasectomy cartoon, he left it to my discretion saying if it was befitting to screen in the Krishna Mutt.

It was great fun. I was told, this request of mine was tom-tomed throughout Udupi announcing people to attend a live Music Concert by the great M.S. Subbulakshmi arranged in the Mutt. When I reached the venue next evening with my Film Unit Van, the large crowd gathering even outside the Mutt was waiting for the arrival of MS !!

Pejawar Seer was already seated along with other Swamijis of seven Mutts. Without delay the screening commenced and the beautiful film attracted the Swamijis and the crowd like anything and particularly the song on Udupi Krishna. With a couple of other short films, I took courage to add the cartoon film on Vasectomy and ended the show.

Just as I stood up to offer my respects and gratitude, Pejawar Seer took the hand-mike from me and first said that the film made them to feel as if it was indeed a live concert by MS. And then he told there was a great need in the country to control population growth and people should realise that a small family is also helpful to them and thanked me for screening the show, not allowing me to thank him.

A couple of years ago, the revered Swamiji was invited to our Apartment by a devotee for Pada Puja in his Flat. When I was introduced, I told the Swamiji about this Film Show over 50 years ago. I was greatly astonished as he very well remembered it along with FP publicity. My Pranams and Salutations to this most respected and venerated Saint whom we have lost.

Incidentally, it was reported in SOM dated Jan. 2 that 25 babies (16 boys / 9 girls) were born on New Year Day at Cheluvamba Hospital in Mysuru alone. And UNICEF has estimated roughly birth of 67,385 children in India on this New Year Day !!

This number is world’s highest and look where we are heading to in controlling population growth even after over 50 years of Family Planning Publicity Campaigns !!