Home » Columns » Abracadabra By K. B. Ganapathy » Personally speaking about BJP, Shiv Sena and My Country 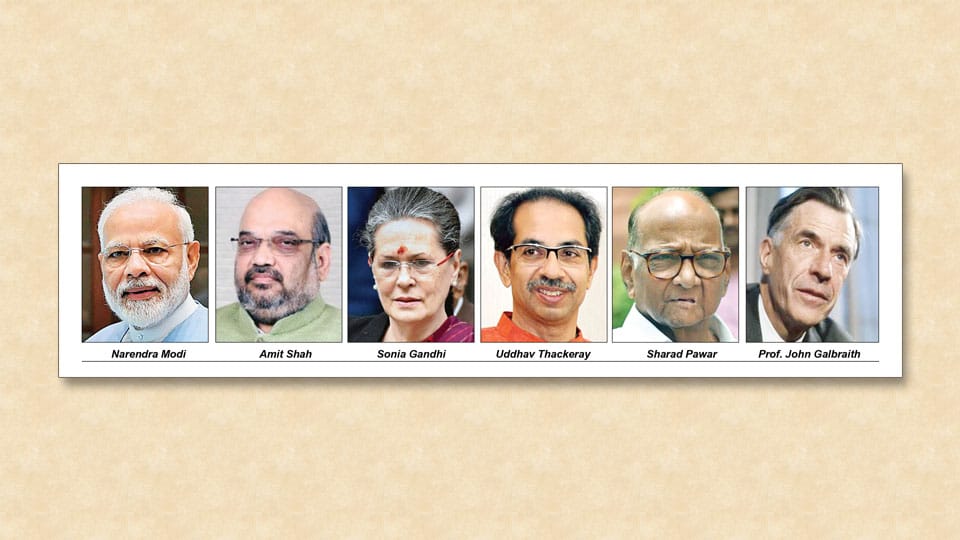 Personally speaking about BJP, Shiv Sena and My Country

Man does not live by bread alone, but also by the word of God. — Bible

The fate of the country depends on the character of the leaders administering it. — Supreme Court Judge Justice N.V. Ramana

Personally speaking the Government we got in Maharashtra, 35 days after the Assembly election results were announced, augurs well for now. Speaking legally also, it is valid in view of the Supreme Court’s opinion given on 29.11.2019. It augurs well for the people of Maharashtra because it has put an end to the political uncertainty by putting a Government, for now, firmly and legally in place.

Happily, the Supreme Court too has put the stamp of legitimacy on this Government formed by three parties following a post-poll alliance (primarily and solely to keep the BJP  out of power) by dismissing yesterday, 29.11.2019, a petition seeking a declaration that the post-poll alliance by Shiv Sena-NCP-Congress in Maharashtra was unconstitutional.

Imagine the political chaos if the petition was allowed! The opinion of the former American Ambassador to India during Kennedy’s Presidency Prof. John Kenneth Galbraith about Indian Democracy that “Indian Democracy is a functioning anarchy” would have been proved correct once again decades after he had expressed his opinion.

Be that as it may, the pertinent point here to ponder is about the future shape and purpose of having a pre-poll or post-poll alliance among the contending political parties in an election. Apparently these alliances will have neither legal nor moral sanctity henceforth. A political party may enter into an election fray with or without an alliance and yet form an alliance to cobble-up  a majority group to form the Government as it has happened in Maharashtra on 28.11.2019 with the ‘Maha Vikas Aghadi’ (MVA) assuming power after swearing-in Shiv Sena Chief Uddhav Thackeray as Chief Minister.

Now that a Government is in place in Maharashtra, one can reflect on whatever happened during the 35 days preceding   the formation of MVA Government. The pre-poll alliance of BJP and Shiv Sena with a majority of seats, enough to form a Government in the face of a fragmented mandate, failed due to uncompromising, intransigent position taken by both BJP and Shiv Sena. They parted company seeking to find new fair-weather friends.

People of Maharashtra and of this country do not yet know who of the two — BJP and Shiv Sena — to be believed when BJP says there was no agreement of 50-50 sharing of power with the Shiv Sena getting the Chief Ministership while the Shiv Sena accuses the BJP of going back on its promise. I guess the problem is in not having a written pre-poll alliance, MoU !

However, when many rounds of negotiations failed and the delay in forming the Government was causing anxiety, the BJP at the Centre brought in the President’s rule. Suddenly, both BJP and Shiv Sena became hyper-active to steal the thunder, as the saying goes, from each other throwing to the winds the moral and ideological principles of their respective parties. Nobody knew what was BJP’s plan beyond bringing in the President’s rule while Shiv Sena apparently compromised its fundamental Hindutva ideology to seek support from NCP, and, more importantly, Congress with its unwavering ideology of Secularism.

Understandably, it is a difficult and time-consuming negotiation between three parties. BJP in the meanwhile took advantage of the delay.

It was here the BJP acted in vulgar haste. A case of acting in haste and repenting at leisure. On 23.11.2019, early morning 5.47 the President’s rule was abrogated and at 8.05 in the morning a surprise BJP-NCP Government was sworn-in at the Raj Bhavan with BJP’s Devendra Fadnavis, former Chief Minister, as the new Chief Minister. Prime Minister Modi’s New India woke up to the greatest farce of our Democracy reaffirming once again the famous words of Prof. John Kenneth Galbraith — ‘Indian Democracy is a functioning anarchy.’ I will call it a functioning farce !

The reaction of the Congress President Sonia Gandhi was on expected lines. According to The Hindu of 29.11.2019, after the formation of the MVA Government, she said: “The Governor acted under instructions from the Prime Minister and the Home Minister in a shameless attempt to subvert Democracy… The BJP’s pre-election  alliance did not hold because of its own arrogance and over-confidence.”

Personally speaking, there seems some truth in what Sonia Gandhi has said and it also has a lesson to BJP to learn, if it is open to learning… that is. Of course, BJP’s actions in matters such as the present one seem to be inspired by the actions of Congress party while it was in power for decades past. Most of its decisions used to be taken in the night. Remember Emergency, for example? Let it pass.

For now Sharad Pawar of NCP might have sewn-in a coalition of three non-BJP parties with disparate ideologies and firmly put in place the MVA Government under Shiv Sena. But the reality is that those who fail to learn from the past history are bound to repeat the same mistake or suffer the same fate. I am thinking about  what happened in Karnataka when Congress with 80 seats surrendered to JD(S) with 38 seats solely to keep the BJP with 104 seats out of power. It was an unholy alliance but legally valid. Whatever the perception, the point is ‘Did it survive?’ No.

This kind of vindictive alliances to keep the BJP out of power is anti-democratic, to use Sonia Gandhi’s own words, I had quoted above: “It is a shameless attempt to subvert Democracy.” An alliance that may subvert Democracy. Yet, Congress went with MVA.

In my humble opinion, Congress and BJP are the only two parties that would, for now, save Democracy for India. They are like two eyes. Congress must stop winking (with apologies to Rahul Gandhi) and BJP should stop thinking ‘after BJP, deluge.’

In the meanwhile, for now Prime Minister Narendra Modi and Home Minister Amit Shah make an unbeatable combination in Indian politics. If they are capable of taking on Secular Sonia Gandhi, it won’t be too difficult nor too far for these two political colossus to trap the prowling Shiv Sena tiger, if not tame it.

I guess, this is a political ‘case history’ where we can dwell into the Ifs and Buts of politics in India. If only BJP had conceded 50-50 formula as a political expediency, even when there was no such pre-poll agreement, today there would have been a Hindutva government in Maharashtra.

Moreover, BJP should have remembered the friendly relationship existing between Shiv Sena and NCP since the time Uddhav Thackeray became the Party Working President in 2003, during the life time of his father, and seen the possibility of a new coalition fashioned after the 2018 Karnataka model solely to keep out BJP from power. May be both BJP and the Shiv Sena scarified Hindutva ideology in their thirst for power.

4 COMMENTS ON THIS POST To “Personally speaking about BJP, Shiv Sena and My Country”