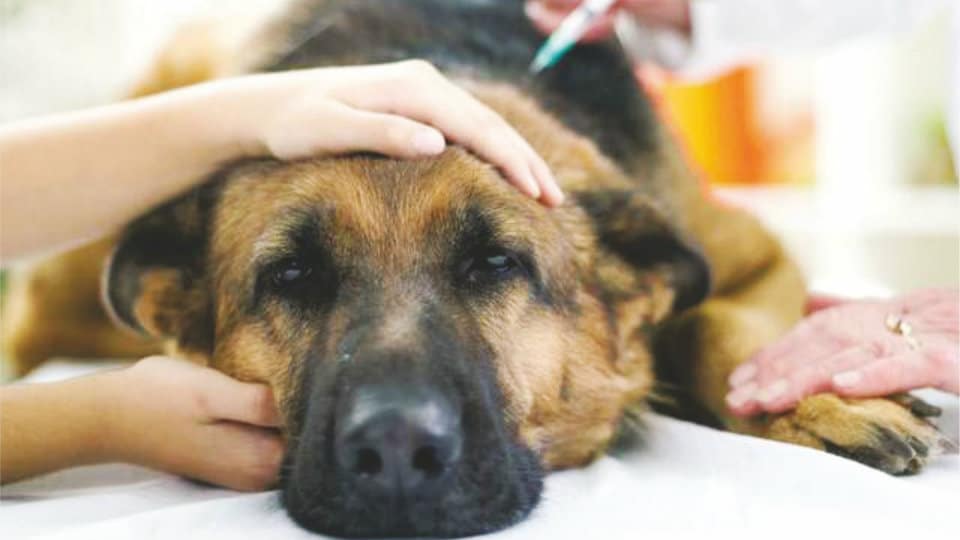 Maneka, in this week’s Pet Talk, explains why it is not safe to give paracetamol to a dog? Why dog’s gums turn black? Why a dog pass blood in his urine? Why does a dog eat mulch? And also gives tips to treat dry skin of cats and mange on a cat and pain relief options for a arthritic cat.

Is it safe to give paracetamol to dogs?

The human pain reliever, paracetamol, should never be given to dogs. It is toxic to canines. Although some dogs die quickly after ingesting the drug, it builds up in the internal organs of others and causes kidney and liver damage, stomach ulcers and anaemia. It also changes the haemoglobin in red blood cells into a substance that is unable to carry oxygen. This leads to breathlessness and facial swelling. Mild symptoms of paracetamol poisoning include upset stomach and fatigue. More serious indicators are staggering, vomiting, dark urine and blood in the faeces.

Why are my dog’s gums turning black?

Dog’s gums can turn black when a dog has dental disease, or they can simply naturally be black. If a dog’s gums have a bluish or grey tint to them in addition to the black, then the owner should bring the dog in to an emergency veterinary clinic immediately, because bluish or grey gums are a sign of a cardiac emergency. If the dog has a bluish or grey tint to the gums, it will also likely have a rapid or slow heart rate and may be gasping. Another possibility for black gums is dental disease. Dogs with dental disease often have black or brown tartar on their teeth and smelly breath. These dogs will need dental cleanings, or they run the risk of developing multiple health problems.

What do I do for the dry skin of cats?

A good diet is the best way to treat dry skin in cats. Switching to higher-quality foods and supplementing with omega-3 fatty acids can help. However, many skin diseases and parasites have similar symptoms to dry skin; a veterinary examination can diagnose the cause of the dry skin and determine a course of treatment. Frequent bathing, or harsh soaps, can also cause dry skin in cats. If you bathe your cat often, or use anti-allergy soaps or other potentially harsh products, try stopping that to see if the skin condition improves. Mats in the cat’s fur can cause symptoms that look like dry skin, including dandruff and itchiness, so regular brushing without the use of any additional products may help. Some cats get dry skin due to environmental conditions, especially during the winter, or in arid climates. Using a humidifier, to add moisture to the environment, can help these cats. A soothing dip of aloe, catnip, pennyroyal or rosemary may provide temporary relief of symptoms.

Why might a dog pass blood in his urine?

Blood in a dog’s urine can have a variety of causes, the most common being a problem with the urinary tract, bladder or kidney infections, or bladder stones. It is a serious issue, and it is essential to seek veterinary attention. Additional symptoms can include frequent, and/or painful, urination and incontinence. Urinary tract infections are caused by the invasion and colonization by bacteria in the bladder or the upper portion of the urethra. Problems arise when the body’s immune system is impaired and unable to fight off the bacteria, leading to a urinary tract infection. This causes inflammation of the infected tissue and problems with urination. While dogs at any stage of life are susceptible to urinary tract infections and canine haematuria, vulnerability increases with advancing age.

What are some home remedies to treat mange on a cat?

One remedy for addressing mange calls for a 1 percent hydrogen peroxide and water solution mixed with borax powder. For every 2 cups of solution, add up to 2 tablespoons of borax and mix. Use this to bathe the affected cat once a week, allowing them to dry naturally afterwards. Do not use this treatment longer than two months. Alternately, apply cooking oil directly to dry patches of skin to ease the irritation and moisturise. The oil also kills any mites that come into contact with it. Another method uses lemons. Cut one lemon into slices, leaving the peel intact, and add those to a few cups of boiling water. Allow the mixture to steep and cool overnight, and apply it to the animal with a sponge. Remember that regularly brushing the cat’s fur also helps remove dry and scabby skin and promotes healing. It is also important to keep the cat’s bedding clean when treating for mange to prevent re-infection. While mange can often be helped with these remedies, it is important to consult with a veterinarian about any treatment. Because mange can also lead to dangerous secondary bacterial and fungal infections, it will ultimately require pharmaceutical treatment.

Why does my dog eat mulch?

A dog who frequently eats non-food items such as wood, dirt and rocks is suffering from a condition called pica. In some cases, pica is exacerbated by a lack of exercise, boredom and even anxiety, especially in younger dogs. However, pica is often the result of a medical problem, such as a dietary deficiency. Rocks are the most common non-food item ingested by dogs suffering from pica, but dogs also sometimes swallow other inedible items such as plastic containers, clothes and wooden objects, including mulch. Puppies that have pica are typically going through a normal learning phase as they investigate which items are food and which are not. However, if an adult dog has pica, have it checked for a dietary deficiency, digestive disorder, internal parasites or poisoning. While pica is sometimes a symptom of a more severe medical problem, pica itself sometimes wreaks havoc on a healthy dog. It is possible for ingested inedible items, such as wood mulch, to lead to an intestinal blockage or a perforated bowel. These are two dangerous conditions with potentially fatal complications. Therefore, it is important to determine the cause of a dog’s pica to stop the behaviour quickly.

What is a natural cure of rain rot in a horse?

To naturally cure rain rot, mix a 16-ounce bottle of mineral oil or baby oil, a 1/2-ounce bottle of tincture of iodine, and a 16-ounce bottle of 3 percent hydrogen peroxide together in a large unsealed container. Use a sponge to apply the mixture to the affected areas, and allow to sit overnight. The following day, shampoo the horse using a mild shampoo, and allow the area to air-dry in the sun, if possible. Rain rot is caused by bacteria that typically reside on a horse’s coat. When a horse’s skin is drenched with water, the bacteria take advantage of this situation. Horse owners must take care not to further irritate the horse’s skin, as doing so can cause more infections. It is caused by the bacteria Dermatophilus congolensis. The bacteria are dormant on the horse’s skin until the skin is affected by biting insect attacks, long-lasting wetness, or high temperatures or humidity. Veterinarians can effectively diagnose rain rot by visually examining a horse’s skin lesions.

What are some pain relief options for my arthritic cat?

To relieve pain in arthritic cats, veterinarians recommend administering pain medications and nutritional supplements that restore cartilage and allowing overweight cats to lose weight. While arthritis has no cure, pet owners may help their cats experience less pain and feel more comfortable by providing a cozy cat bed with a blanket, providing a soft massage while the cat relaxes, grooming hard-to-reach areas, and ensuring the litterbox, food bowl and water bowl are easily accessible. Letting a cat maintain a healthy weight helps relieve pain by reducing the load on the joints.

Dogs Pet Talk
Allergy and Asthma
Will ‘SOM’ continue to be naughty?