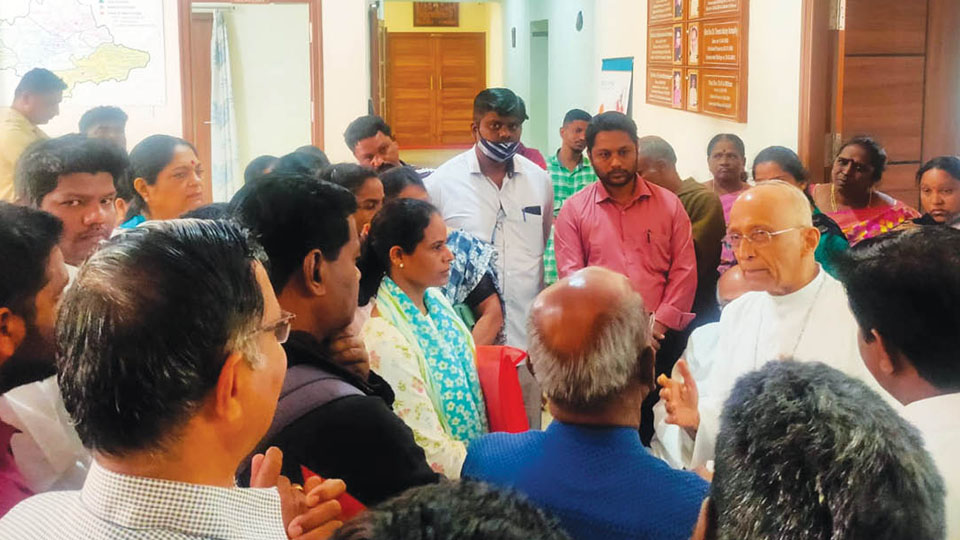 Mysore/Mysuru: Members of Catholic Association have urged the new Administrator of the Diocese of Mysore Most Rev. Bernard Moras to recall Mysuru Bishop Most Rev. Dr. K.A. William, who has gone on a long leave and to initiate stringent disciplinary action against a few priests for bringing a bad name to the community.

Association members, who met Most Rev. Bernard Moras at the Bishop House in Bannimantap on Monday, said that there were involvements of a few Priests behind the false accusations on Bishop William of misusing funds and other allegations.

They also said that a few Priests were involved in spreading false allegations and tarnishing the image of the Bishop of Mysore and the community in general through social media but nothing has been done to stop circulation of false allegations by the higher authorities.

Though Bishop William had informed that he was going on leave, there are rumours doing rounds on social media that he (Rev. William) has been removed from the post, they said and added that such false allegations against the Bishop was hurting the sentiments of the community.

The Association members demanded the Administrator of the Diocese of Mysore to recall Bishop William immediately and also initiate action against a few priests.

Most Rev. Bernard Moras, who received a memorandum from the Association members, told them that he would forward their pleas to the higher authorities.