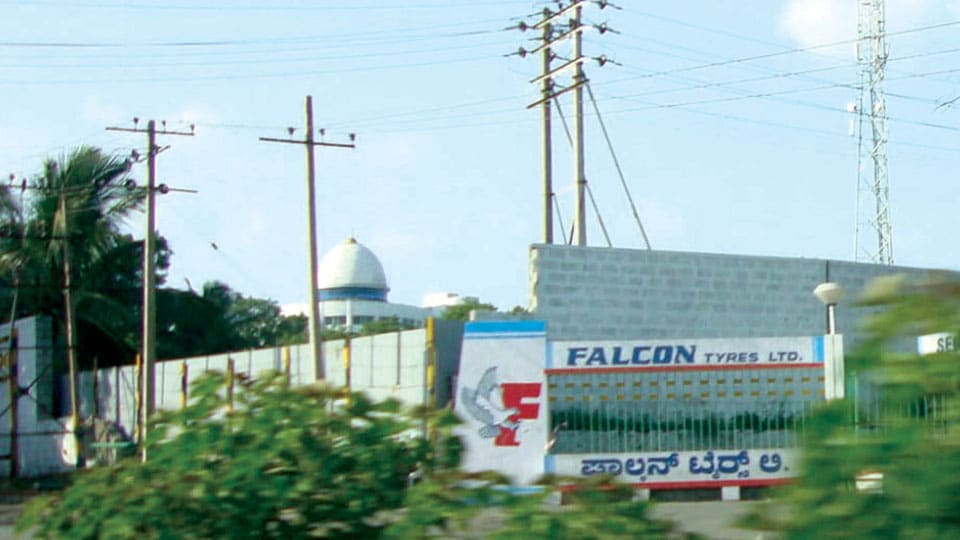 Mysore/Mysuru: Caught in a desperate situation due to closure of factory since the last four years, eight months and the ongoing COVID-19 pandemic, the employees of city-based Falcon Tyres have sent out an appeal to the State Government to revive the factory and save thousands of employees and their families from poverty.

Pushed to the wall, the harried employees of the factory have appealed to the State Government to revive the factory on the lines of the revival of the defunct Pandavapura Sahakara Sakkare Kharkhane (PSSK) at Pandavapura in Mandya district which has started production now.

If Falcon Tyres is revived, tyre production can begin in one month, the employees stated.

The appeal comes in the wake of Chief Minister B.S. Yediyurappa’s scheduled visit to Mysuru next week to chair the Dasara High Power Committee meeting.

The factory employees are hoping to meet the Chief Minister and submit a memorandum for the revival of the factory that was once considered as a prestigious one.

Falcon Tyres shut production in December 2015 and there are over 459 permanent employees, 300 temporary staff, 150 managerial staff and over 1,000 apprentices and casual labourers.

“Eight employees have committed suicide after the factory’s closure and two employees have been killed in accidents. Many of the employees have switched to other professions like masonry, painting, security jobs, vehicle drivers and autorickshaw drivers. COVID-19 has worsened the situation and we are all in dire straits,” Shivanna, General Secretary, Falcon Tyres Employees Union, told Star of Mysore.

Mysuru-based Falcon Tyres, owned by the Ruia Group headed by Pavan Kumar Ruia, is located at Metagalli in city and has a campus of 18 acres.

“The previous H.D. Kumaraswamy and Siddharamaiah Governments had evinced keen interest in reviving the factory but nothing concrete happened despite several rounds of meetings and also a series of hunger strikes by employees. We are pinning hopes on B.S. Yediyurappa Government to save our lives,” he added.

Shivanna said that many tyre manufacturing giants like CEAT, Bridgestone, Apollo and TVS have visited the factory in a bid to purchase it after a liquidator was appointed in December last year.

“We have very good and well-maintained machineries and all the allied facilities including water, power and good roads. If at all the factory is revived, we can start production in one month,” he said.

The factory, established over four decades ago, was one of the largest two-wheeler tyres and tubes manufacturers in Asia. The factory slipped into downslide in 2014, before shutting down in 2015.

“The employees have not been paid salaries for years and other statutory benefits such as Provident Fund (PF), Gratuity, and Employees’ State Insurance (ESI) etc. A National Company Law Tribunal (NCLT) Court in May 2018 had ordered the factory owner to restart the factory in six months, through an IRP (Insolvency Resolution Professional) process,” Shivanna said.

For the revival, a capital of Rs. 400 crore is needed and Rs. 115 crore is needed to be paid as salaries and dues to 459 permanent employees and a bank loan of Rs. 170 crore has to be cleared, he added.