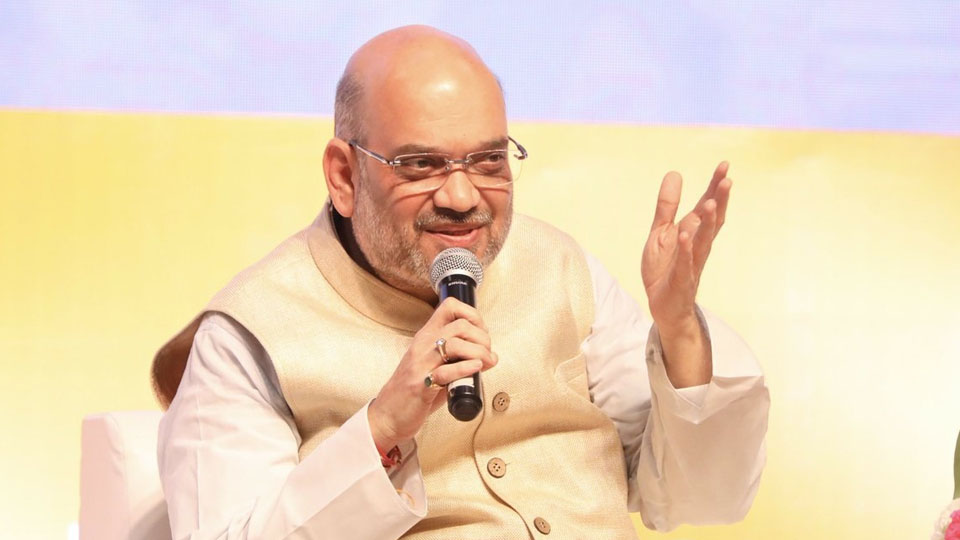 At last, someone said history should be re-written from India’s point of view.  Praise be to our Home Ministerji.  As he said, Guptavanshik – Veer Skandgupta Vikramaditya is unknown to our children.  That is a shame because it was Guptavanshik – Veer Skandgupta Vikramaditya who expanded our border from Junagadh to Afghanistan.  Deeply hurt, Amit Shahji asked: “Who is stopping us from re-writing history?”

No one is, fortunately.  We can take up the re-writing of our history in earnest and save our children from further nonsense spread by European historians and their Indian imitators such as Romila Thapar.  On a priority basis, the task of supervising the re-writing must be entrusted to Smriti Irani,  whose experience as Textile Minister will be valuable in weaving new threads of history from an Indian angle.

The possibilities are immense.  Take the case of Bhimbetka rock shelters in today’s Madhya Pradesh.  We all know they were built 11,000 years ago during the neolithic period.  What we don’t know is that the shelters were intended to protect people from that bandit looter, Mohammed Ghazni.  True, Ghazni would be born only 12,000 years later.  But our ancestors had the ability to see Islamic dangers far ahead and take precautionary measures.  No wonder the Ghazni fellow plundered our Somnath Temple and then ran away.

In 700 BCE, the Upanishads were written.  Does anyone know why they don’t carry the author’s name?  The reason is simple: Each Upanishad was written and then re-written so many times that it was impossible to know who wrote what.  Similar things happened to Panini, though he was lucky to retain his name.  He wrote his grammar textbook in 350 BCE hoping that it would help make Sanskrit the national language. But guys from Lucknow-Varanasi area re-wrote the text, making Hindi the language of grammar and thus the national language of India. Underground guerillas are said to be further re-writing that part of the text to make Malayalam the national language.

The guys from Lucknow- Varanasi area have a mission: Purge Indian history of all foreign influences such as Portuguese and Madrassi. They have found that re-writing is the most effective — and just — way to achieve that end. For example, why should we still say there was a Mughal period in history?  The Mughals were not only foreigners, they were Muslims.  So we have a duty to erase them from memory.  The process has got off to a good start with Allahabad becoming Prayagraj and Mughalsarai turning into Deendayal Upadhyay Nagar. Agra will soon be known as Agravan, city of forests, or Agarwal Nagar, city of the Agarwal Community.  The BJP has announced that the moment they form the Government in Telangana, Hyderabad will be renamed Bhagyanagar. Delhi’s Aurangzeb Road was converted to A.P.J. Abdul Kalam Road in recognition of a vegetarian known as Kalam Iyer.

A complication in the re-writing saga arose when Tholakappiar, who codified Tamil grammar was accorded the same reverence as given to Panini.  The guys from Lucknow-Varanasi area did not know what was Tamil.  When they finally did, an extensive re-writing of history was commissioned.  Their researchers found that Tamil was linked to Dravidian civilisation, a foreign entity unknown to the early history of India.  Ancient India came out of Indus Valley and Harappa, both built by  Aryans, an indigenous tribe native to Delhi’s Khan Market.  Dravidians are outsiders from California, who came to India but were too backward to mix with the indigenous Aryans.  For survival, the Dravidians went south and started thinking of ways to punish the arrogant Aryans.  They found the answer in iddlis taken with sambar.  The Aryans found the combination heavenly but their attempt to make it ended with iddlis turning into lassi and sambar emerging as Veechu Porotha.  Eventually the baffled Aryans were forced to concede that Dravidians were part of Aryavarta which was diplomatically better than Aryans being part of Dravida Nadu.

The lesson we need to learn is obvious — that the re-writing of history is a continuous process.  George Orwell had seen this before Amit Shahji was born.  His book 1984 (written in 1948) presented the picture of a polity in which all citizens were manipulated by a single party.  The philosophy was: Who controls the present controls the past and the future.  In 1948 that sounded like a novelist’s paranoia.  In 2019, it was found to be Bharat’s glory. Re-writing of history is pure patriotism.  All that remains is for us to invent ways to ensure that history re-written today is not re-re-written tomorrow.

Over a cup of evening tea T.J.S. George
Land of Languages
Tulasi Puja