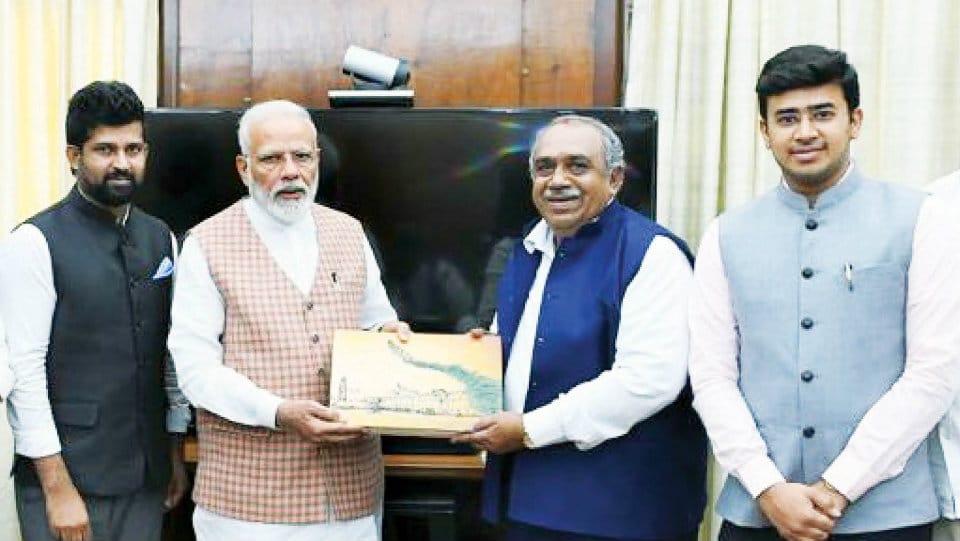 Mysuru:  University of Mysore (UoM) Vice- Chancellor Prof. G. Hemantha Kumar met Prime Minister Narendra Modi at the Parliament Office in New Delhi on Monday at 11.30 am and invited him to attend the Centenary Year  Convocation of the University that is going to be held in 2020.

The VC was with the Prime Minister for about five to six minutes. Modi asked him about the University and its functioning. The PM also recalled his visit to Mysuru when he had inaugurated the 103rd Indian Science Congress in Jan. 2016.

Speaking to Star of Mysore, Prof. Hemantha Kumar said, “I invited him to attend the Convocation of the University next year when we will be celebrating its hundredth year. He was very happy to hear about it. Then I presented him the Coffee Table Book ‘One Hundred Years – University of Mysore’ and he immediately recalled his visit to the city. I also presented a small photo album of the Indian Science Congress containing his photographs.”

Besides, the VC submitted an appeal to the Prime Minister urging him to reconsider the University for Institution of Eminence (IoE) status. The status ensures special funding from the Centre to the UoM.