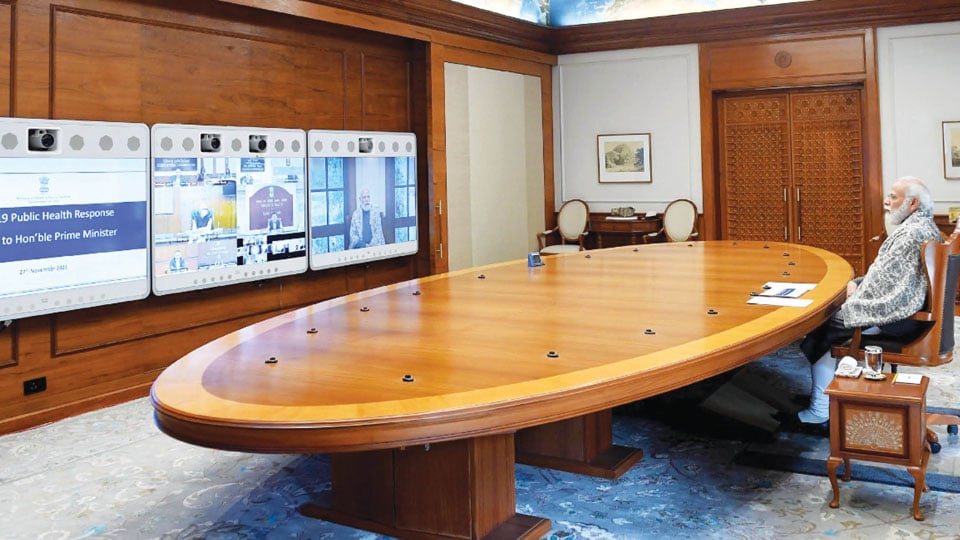 New Delhi: Prime Minister Narendra Modi met top officials this morning via video-conferencing to review the COVID-19 and vaccination situation in the country.

The meeting comes amid concern over the B.1.1.529 strain of the Coronavirus, renamed Omicron by the World Health Organisation (WHO) and has been red flagged for a number of mutations that might make it more resistant to vaccines, increase transmissibility and lead to more severe symptoms.

The variant, first detected in South Africa this week, and since reported from Botswana, Hong Kong, Israel and Belgium, is believed to have 50 mutations, including over 30 on spike protein and 10 on receptor binding domain. WHO has tagged Omicron as a ‘variant of concern’, which puts it alongside the globally-dominant Delta, plus its weaker rivals Alpha, Beta and Gamma.

The US has also imposed a travel ban on seven southern African countries. Namibia, Eswatini, Lesotho, Malawi, and Mozambique are on the list, as are South Africa and Botswana.

The Karnataka Government issued an order last evening stating that international arrivals from African countries will need to undergo screening and testing. It has instructed District Administrations to strictly adhere to the overarching ‘Test-Track Treat-Vaccinate’ principle to prevent the possible spread.  In a circular issued in Bengaluru, T.K. Anil Kumar, Principal Secretary (Health and Family Welfare), stated that rigorous monitoring was needed in the matter.  He also noted that routine sentinel surveillance and surge surveillance, and timely sending of RT-PCR positive samples to designated INSACOG Genome Sequencing Laboratories (lGSLs) also must be done.