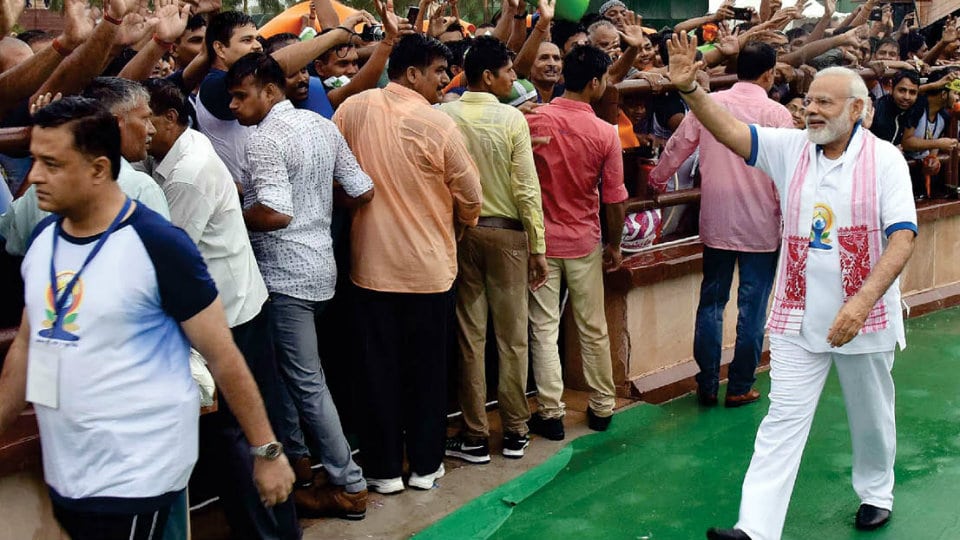 Lucknow: “Yoga, akin to its capacity to unite the body, mind and soul, has played a ‘big role’ in binding the world, cutting across linguistic and cultural barriers,” said Prime Minister Narendra Modi.

Addressing a huge gathering at Ramabai Ambedkar Maidan on the occasion of the 3rd International Yoga Day celebrations today, he also asserted that the traditional practice has now become part of every person’s life.

“Many countries which do not know our language, tradition, or culture, are now connecting to India through Yoga. The practice, which connects body, mind and soul, has played a big role in binding the world too,” he said.

“Earlier, Yoga was only restricted to saints and seers in the Himalayan mountains. Now, it has become part of every person’s

PM Modi leads Yoga Day celebrations in Lucknow,” he said. He also asserted that attaining ‘wellness’ through yoga was more important than simply being physically fit.

“It is not important to perform yoga for 24 hours. 50 or 60 minutes (is fine) because it lends harmony to the body, mind and intellect. If 1.25 billion Indians and people around the world can attain this state of well-being, then humankind can also tide over problems born out of human thoughts,” he said.

He also explained the importance of Yoga using an analogy of salt. “Just as the importance of salt is not only to lend taste to food, but also ensure well-being of the body, similarly Yoga can have the same importance as salt has in life,” the PM said.

He said yoga is about health assurance. “It is not even expensive to practice,” he added.

“I urge everyone to make yoga a part of their lives,” he said, adding that he was glad to see several yoga institutes take shape over the last three years.

Three years ago, Modi had persuaded the United Nations to declare June 21 as International Yoga Day. Since then, thousands of people hold yoga programmes across the world on this day. A tight security cordon was put in place around the venue, while all major roads were under strict CCTV vigil.