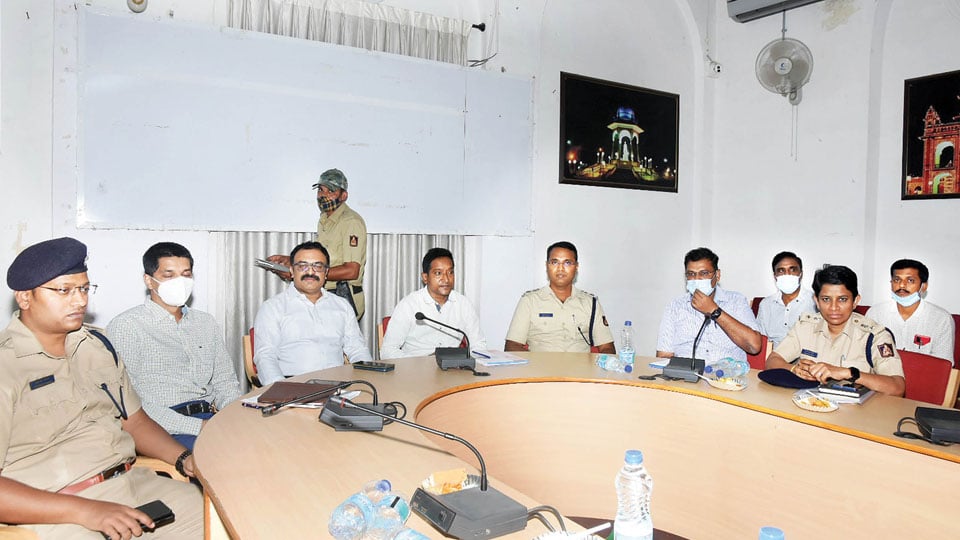 Mysore/Mysuru: With just 20 days left for International Day of Yoga event on June 21 where Prime Minister Narendra Modi is scheduled to lead the mass yoga demonstration inside the ramparts of the sprawling Mysore Palace, a high-level closed-door meeting was held at the Deputy Commissioner’s Office this morning.

The PM will arrive in Mysuru on June 20 and will stay at Hotel Radisson Blu Plaza and today’s meeting discussed the broad guidelines to make the event successful. PM Modi will depart Mysuru soon after the Yoga event.

Though no concrete decisions have been taken in view of  the model code of conduct for the forthcoming Legislative Council polls from the South Graduates Constituency, 11 Committees have been formed to ensure an incident-free International Yoga Day. Discussions also took place to project Mysuru as a Yoga Hub as the PM’s visit will be a big boost to Brand Mysuru.

The names of the Committees have been kept under wraps in view of the model code of conduct. Though media was barred from covering the proceedings of the meeting, sources told Star of Mysore that more than creating a Yoga record, the focus will be on PM’s security and all decisions have to be mandatorily approved by the Prime Minister’s Office (PMO) and the Special Protection Group (SPG) that guards the PM.

While the number of participants in Yoga inside the Palace has been put at a maximum of 15,000, the stakeholders of the Mysuru Yoga Federation proposed the idea of a link Yoga performance where areas around the Palace including Doddakere Maidan, K.R. Circle, D. Devaraj Urs Road, Ramaswamy Circle, Hardinge Circle can be Yoga venues where over 75,000 to one lakh people can perform.

This idea, however, was shot down at the meeting as the focus will be on the PM’s security rather than on creating a Yoga record. If all the roads and areas are filled with people, there will be obstructions to the smooth movement of the PM’s convoy from Hotel Radisson Blu Plaza to the Palace.  Officials felt that this is impractical in view of many emergency exits and entries that will be created by the SPG.

No decision on bus stand shifting

There were reports of Police Commissioner Dr. Chandragupta and MCC Commissioner Lakshmikantha Reddy suggesting KSRTC to shift the City Bus Stand temporarily for two days as the Bus Stand abuts the Mysore Palace and the SPG might consider this as a security risk. However, KSRTC DC Srinivas told SOM that he has not got any communication in this regard.

“These things have to be decided by the Government and there must be proper planning. However, we have not received any communication so far,” he said.

Who will be present at Palace?

Mysuru District Minister S.T. Somashekar will have to decide on the list of people who would be present inside the Palace fort on June 21. A stage will have to be set up for the PM’s Yoga performance and the stage will be erected as per security protocols. Somashekar cannot participate in the meetings now due to the model code of conduct. Sources said that another high-level meeting will be held in two or three days where the actual plan of action for the preparation will be chalked out. This meeting will be held under the leadership of DC Dr. Bagadi Gautham and AYUSH Department.