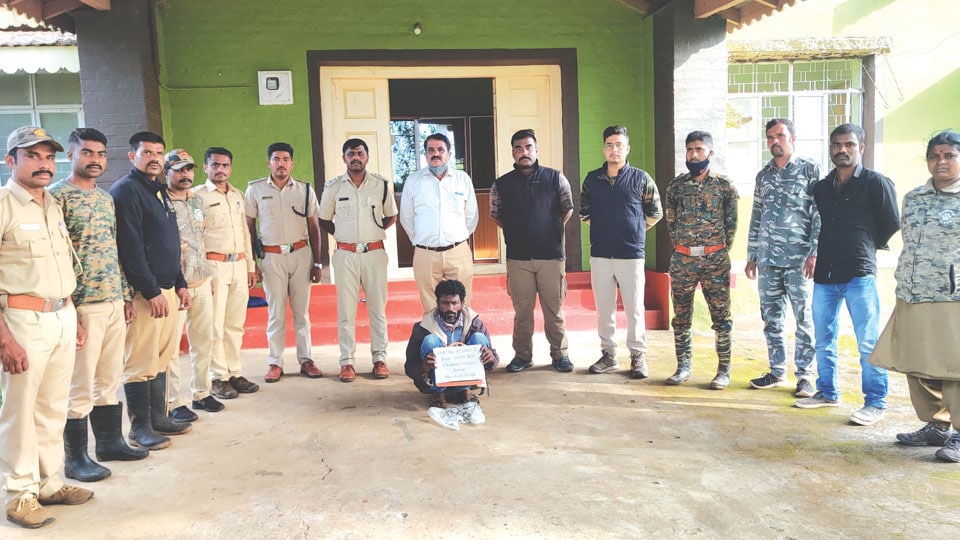 Mysore/Mysuru: The Forest Department personnel have arrested the poacher who was responsible for the death of a tiger at Gundre Range in Bandipur Tiger Reserve. The poacher was arrested within 24 hours of the incident coming to light and it was once again Rana, the sniffer dog of Bandipur, which led the Forest officials to the poacher’s house.

The arrested poacher is Chandru, a resident of Rajapura Tribal Hamlet in the fringes of Gundre Range and Forest staff have launched a hunt to nab 3 others identified as Basavaraju, Suresh and Mara of the same hamlet, who have gone absconding.

All the four accused have the history of forest crimes and Chandru, who has been arrested, was also arrested two years ago, while trying to sell tiger skin at Pandavapura in Mandya district. He was out on bail in the case and last year he was again arrested while trying to sell elephant tusks. After coming out on bail in this case too, Chandru had once again involved himself in forest crime along with his accomplices. The above information was revealed by Chandru himself during interrogation.

He also revealed that on Sept. 9, he (Chandru) along with his accomplices had put a snare among the bushes near the elephant at Gundre Range to catch deer, but on Sept. 10, the tiger, which was injured in a porcupine attack, got caught in the snare. He said that as movement of people was more, it was not possible to neither transport the tiger carcass nor remove the claws and teeth.

Rana helps Forest staff: After the Forest staff found the decomposed carcass of the tiger, the officials summoned Rana, the sniffer German Shepherd Dog of Bandipur, to the spot to help them trace the culprits.

Rana, which began its operation, followed the scent of the poacher and led the Forest staff to the house of Chandru at Rajapura Tribal Hamlet. But before Rana could lead the officials to Chandru’s house, Forest Department informants had confirmed the officials about the movement of Chandru and his accomplices in the forest area. The Forest staff, who zeroed in Chandru at his house, arrested him and during interrogation, Chandru is said to have confessed of putting the snare, Forest officials said.

It is learnt that the tiger had injured itself while trying to attack a porcupine in the second week of August itself. The sharp quills (thorns) of the porcupine had pierced the neck, front leg and other parts of the body causing injuries.