Home » News » Not so sweet…: Honey trade falls in Kodagu 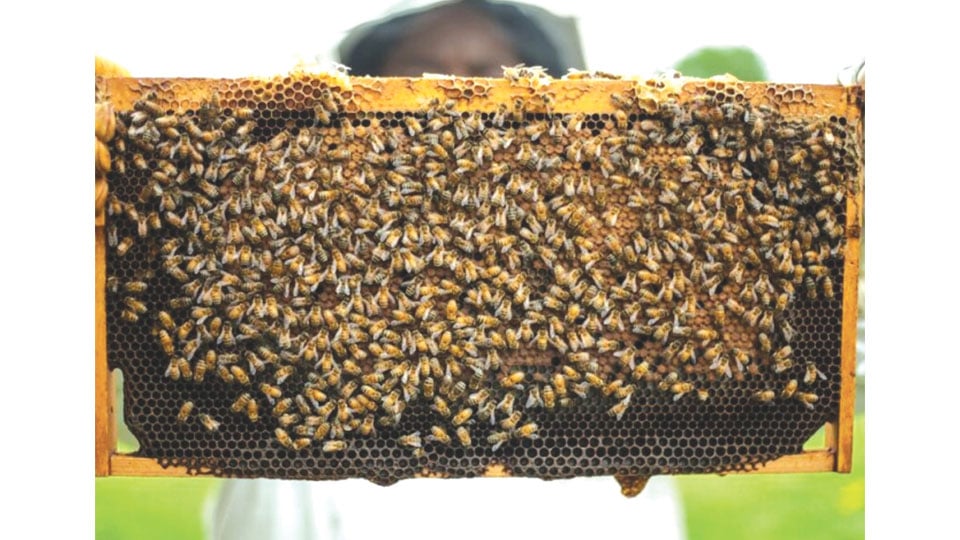 Not so sweet…: Honey trade falls in Kodagu

Madikeri: Pollution and disappearing green cover have driven away nearly 40 percent of the visiting bee populations and the last decade has seen little activity from the regular bee keepers due to sustainability factors and due to gross neglect by the Government and officers who had taken up the responsibility of producing honey.

Coorg Honey has its own fame, taste, aroma and texture compared to other bottled and branded honey products. It is known for its originality, purity and longevity even when stored in closed containers for years together. Realising the unique USP of Coorg Honey, the State Government established a separate wing for Apiculture.

It was an exclusive department when Coorg was a ‘C’ State and later, it came under Industries Department and in 2011, policy-makers shifted it to Horticulture Department with an intention of encouraging more honey cultivation as the Department too is associated with nature and greenery.

It went on initially well with vast acreage of land coming under Apiculture and even the farmers reaping profits and at the same time, the Government went on an offensive in the brand-building exercise to further popularise the golden colour sweet liquid.

Honey production had come down drastically in the 1990s due to Thai Sac Brood disease that originated in Thailand and it wiped out the bees including the queen bees. Other factors like the red ant menace further crippled the industry.

However, Apiculture saw a revival of sorts after some years and now, it looks like even the Government has lost interest. The Horticulture Department that enthusiastically took up the onus of reviving the cultivation to regain the past glory too gave up many initiatives. Even the strength in the exclusive honey division came down to just four including one officer from Kodagu. All the other officers have been shifted to other Departments.

Apart from private lands for Apiculture in Kodagu, the Department itself owns 42-acre property exclusive for this purpose. But due to staff shortage and lack of vision, planning and also will power, the lands have been abandoned. These lands were purchased or allotted for training, exhibition of equipment and other purposes.

After a series of floods and landslides hit Kodagu for three consecutive years from 2017, many farmers lost their land and livelihood. With paltry help from the Government despite eloquent speeches by the Chief Ministers, Ministers, MPs and MLAs, some farmers found solace in their own bee-keeping ventures.

Farmers formed local co-operatives and produced nectar and thus helped provide a steady income to people interested in bee-keeping. However, this venture too was not supported by the Government and was limited to small areas of the district. On its part, the Government is spending only Rs. 50 lakh to Rs. 75 lakh per year on Apiculture training and maintaining of offices, procuring honeycombs, boxes and other stuff.

Huge demand but no action

Though there is a great demand for honey in the domestic and overseas market, nothing concrete is being done to either increase the cultivation area or to encourage private apiculturists. It is unfortunate that though Kodagu is ideal for honey production with abundant nature and flowers conducive for bees and birds, nothing is being done to encourage this financial activity.

At present, there are over 12,000 people who are dependent on apiculture at least to supplement their main income. Honey is being produced in 65,000 boxes (beehives). But the district actually has the means and capacity to produce more than two lakh beehives but a bit of hand-holding from the Government is needed for the district to return to its glory days of honey making.

The elected representatives from Kodagu must innovate and exert pressure on the Government to come up with novel schemes to encourage traditional bee-keepers who have been harvesting honey since ages. These schemes could also be an incentive to the Kodagu youths to stop migrating to cities in search of jobs.

Not much work at  Honey Park

Though there is a Honey Park in Bhagamandala that houses the only Apiculture Technical Training Centre in Karnataka, nothing much happens here apart from a steady stream of inquisitive visitors. The Park also houses a Honey Museum. Built at a cost of Rs. 1.42 crore, the Park was intended to act as a comprehensive centre for honey production and related activities.

But apart from regular visitors who want to know about honey production, the costs and apiculture procedure and a few research scholars who visit the place to work on their thesis, nothing much happens here. Sadly, the Government has not promoted the officers working at the honey wing of the Horticulture Department.

While the existing staffs are close to their retirement age, the Government is unlikely to make new appointments. It might either depute officers from other Departments just for paperwork here or close the operations altogether.