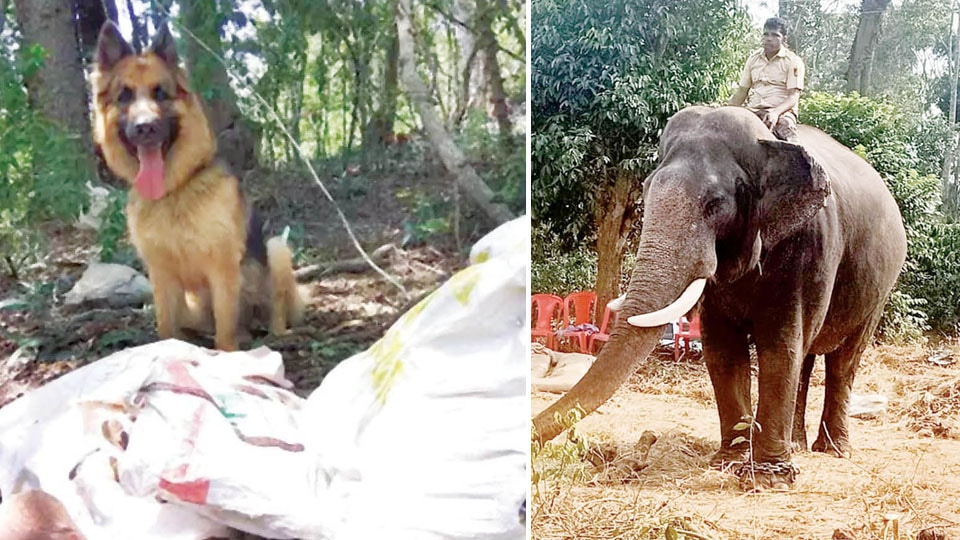 Ponnampet: Rana, the dashing German Shepherd dog of the Forest Department at Bandipur Tiger Reserve has been pressed into service to track the elusive tiger that has spread terror in South Kodagu.

Even after 10 days of intensive search and combing operations with four tamed elephants led by the daring tusker Abhimanyu, the big cat has not been traced so far.

While the Forest Department officials — forgetting about their families and other responsibilities — are camping in T. Shettigeri, Srimangala and Bellur are sparing no efforts to trace the feline, villagers are getting impatient day-by-day as they are scared to even come out of their house in this peak coffee picking and irrigation season. The tiger on the prowl has already killed a teenager Ayyappa and  60-year-old Chinni and a couple of cattle heads.

Sniffer dog Rana, aged 8, who lives in Hediyala Range (camp of Special Tiger Protection Force) of Bandipur Tiger Reserve has played a key role in many such operations and is a nightmare to poachers. Rana had caught them at their homes by following their scent from the jungles. It has solved many sandalwood smuggling cases and had tracked those who had escaped with the claws of Prince, a popular male  tiger of Bandipur.

Last evening, Rana was brought to T. Shettigeri and Bellur where pug marks were found near a stream. Rana caught the scent and moved further from the stream near the house of Mathranda Raghu. There is a steep gradient a few metres from the stream and Rana hesitated to climb the gradient.

This move by the daring dog has made the Department officials to believe that the tiger might be hiding nearby. The Department had erected a watch tower near the area and two sharp-shooters were posted there since Saturday evening. They lay in wait in futile as the big cat did not wander in the locality.

A camera placed four days back near the place where the tiger had left the carcass of a cow has captured the visuals of the tiger coming near the carcass to consume it. Forest officials have identified the feline by its distinct features and said that it belonged to Nagarahole National Park.

Over 150 Forest personnel and a team of 30 officers and two sharp-shooters are involved in the operation and eight teams have been formed to net the tiger. In order to protect the cattle heads and calves of the affected villages, all the animals are being herded to one location where grass is supplied to them. One team of forest guards are keeping a watch at this location.

Interestingly, there have not been any reports of the tiger killing any livestock since the last four days. It is suspected that the tiger might have returned to the jungle or it might be sustaining itself by hunting down pigs.

Meanwhile, South Kodagu is witnessing a foggy atmosphere. As such, it is difficult to spot the tiger roaming amidst coffee estates. As the coffee blossoming season has begun, it is difficult for the tamed elephants to venture into the estates as the flowers are likely to drop due to the force the elephants entering  the estates.

The combing operation is entirely dependent on pug marks and on the visuals caught in over 20 camera traps set up inside the thickets.