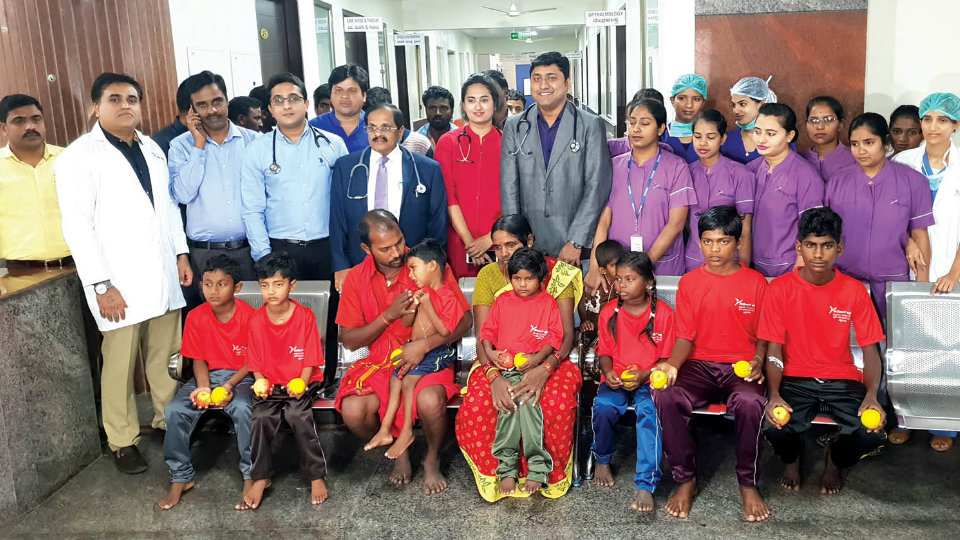 Out of five adults who are undergoing treatment at Suyog Hospital, four are still in ICU while one patient has been shifted to the ward. The hospital is continuing treatment to two children.

District Surgeon Dr. Raghuram visited all the hospitals and certified the health of all those who were discharged.

Meanwhile, Sugog Hospital Founder S.P. Yoganna, speaking to media persons said that a team of doctors in ambulances with ICU facilities were rushed to Hanur as soon as they got the information about the poisoning. “We later rushed to K.R. Hospital, where children were admitted and selected children to provide treatment in our hospital as we have better child care facilities,” he added.

Dr. Mahesh, ICU in-charge at Suyog Hospital, explaining the condition of a patient at the hospital to Chamarajanagar Deputy Commissioner B.B. Cauvery and Additional DC C.L. Ananda during their visit this morning.

DC Cauvery speaking during her visit to Suyog Hospital said that all the children admitted in the hospital were healthy and added that about 20 people including children are being discharged from various hospitals in Mysuru.

She further said that the Mysuru District Administration co-operated well and helped save many lives.

The DC said that the State Government has taken steps to provide healthcare equipment and facilities to Chamarajanagar Hospitals and also provide more ambulances.

Speaking to the children who were being discharged today, she asked them not to be afraid besides asking the children to study well and serve the society.