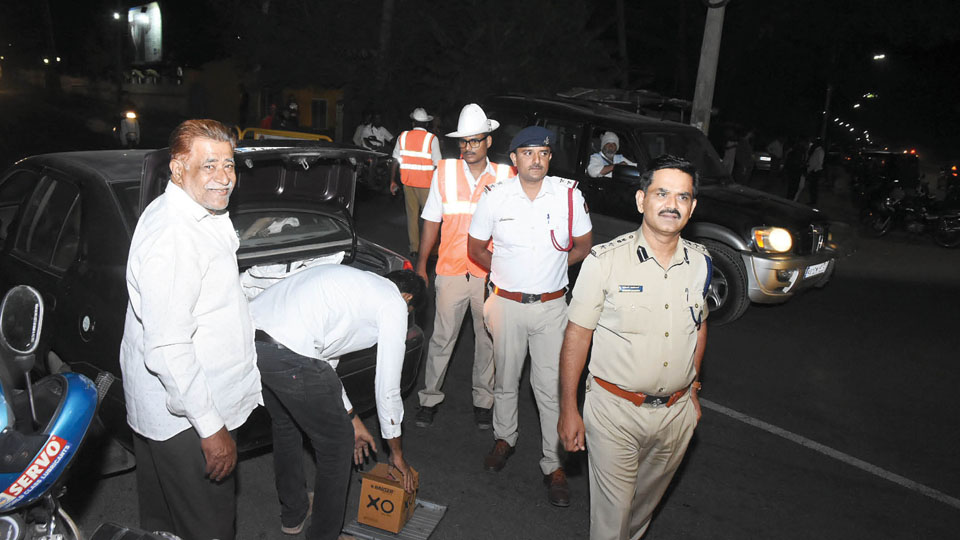 Mysore/Mysuru: To instil discipline among staff and to monitor their day-to-day duties, City Police Commissioner B. Ramesh is personally getting onto the streets and supervising the special operations being conducted by his officers and staff on the city roads.

The drive was held yesterday in more than 25 places across the city including Sayyaji Rao Road, Hunsur Road, Bannur Road, Mahadevapura Road, Bengaluru-Mysuru Road (near ESI Hospital, behind LIC Office) and near Teresian College Circle.

Police said that the drives will continue and have urged the motorists to carry their vehicle documents including vehicle insurance copy and their Driving Licence (DL) while driving or riding vehicles. They have requested the public to cooperate.

City Police Commissioner Ramesh, who inspected various checking spots, collected information about the drive and personally supervised one such operation on Bengaluru-Mysuru Road near ESI Hospital and checked documents of vehicles along with DCP (Crime and Traffic) M.S. Geetha Prasanna.

Goods vehicles, cars, mini vans, two-wheelers, etc. were stopped and documents checked. Luggage kept inside the dickey of cars were also checked. The registration numbers of the vehicles were noted before letting them go. Though at some places wordy duel ensued between motorists and Police, this did not affect the drive and Cops continued checking.

Yesterday alone, a total of 2,448 vehicles were checked and 684 cases were registered. As many as 47 vehicles have been seized and a total of Rs. 3,22,200 fine was collected from the traffic rule offenders.