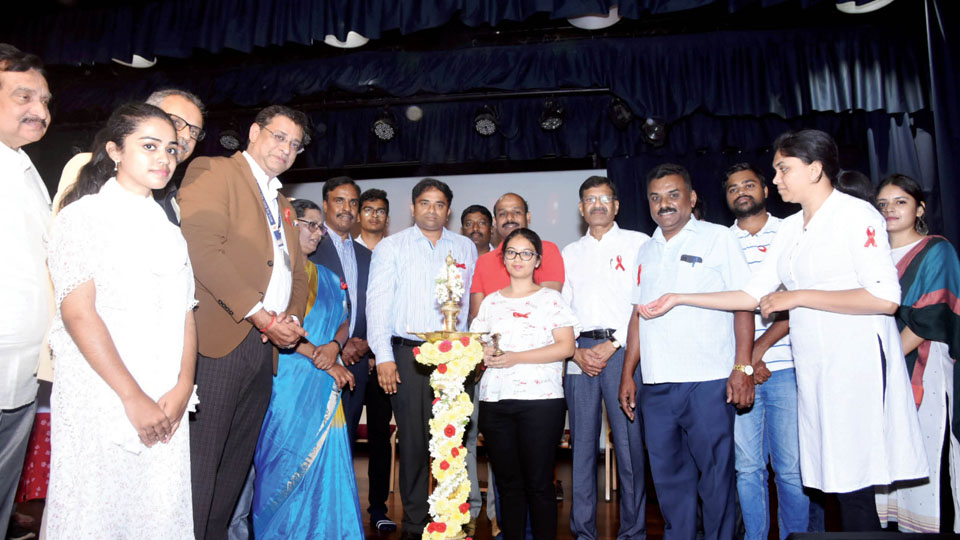 The rally passed through prominent roads in Bannimantap and culminated at the JSS College of Pharmacy in Bannimantap. A stage programme was held at JSS Pharmacy College which was inaugurated by the students who were joined by the Deputy Commissioner Dr. K.V. Rajendra.

Speaking later, the DC said that to stop the spread of AIDS, awareness programmes are being conducted across the world as there is an increase in AIDS cases. “The main cause of AIDS are due to drugs, use of needles while getting a tattoo and due to unprotected sex etc.,” he said and advised people to not degrade those who are having AIDS but rather to morally support them. Dr. Rajendra advised people to not panic if they are HIV positive and asked them to take treatment before it is too late.

DHO Dr. Prasad said that 25 Integrated Counselling and Testing Centres (ICTC) and one mobile ICTC are actively functioning in Mysuru district to provide information about HIV prevention, counsel people to undergo testing and provide testing facilities and also links positive people with treatment, care and support systems. “Three Anti Retroviral Therapy (ART) Centres are actively functioning at K.R. Hospital, JSS Hospital and Asha Kirana Hospital in city. In order to provide ICTC service at all taluks in the district, Facility-based Integrated Counselling and Testing Centre (FICTC) are set up at all Primary Health Centres (PHCs) and FICTC service is provided at 22 private hospitals in the district through Public Private Partnership (PPP) model,” he added.