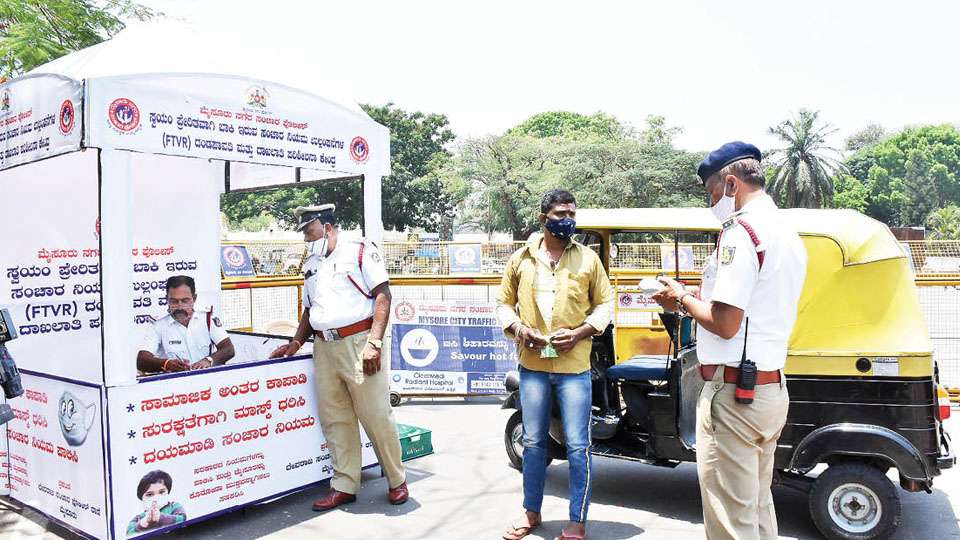 Mysore/Mysuru: Perhaps a new chapter is opening in city which highlights Policemen as more sensitive and humane, people-friendly and committed to the rule of law and at the same time committed to the safety and security of people.

As a right step in this direction, a people-friendly initiative took shape in city this morning with the establishment of over 10 ‘Voluntary Checking Points’ or ‘Self-Checking Points’ at all Traffic Sub-Divisions where people could walk into the counter to check if there are any traffic violation cases booked on their vehicles. They can also pay traffic penalties on the spot. Here too there is no force as penalties can even be paid at a later stage.

New people-friendly rules formulated after the death of a two-wheeler rider while escaping a Police documentation check drive at Hinkal recently has come into effect from today. As per the pilot project, ‘Voluntary Checking Points’ have been opened at all Traffic Sub-Divisions:

The kiosks or pendals will be opened between 10 am and 5 pm. Vehicle owners, drivers and users can come voluntarily to the checking points and get their documents verified.

Also, the past case history can be obtained over-the-counter as the Police staff manning the checking centres is equipped with smartphones and other gadgets where the complete violation history of vehicles                         can be checked.

There is an option to pay penalties at the kiosks too. If a violator cannot pay the penalty on the spot, he/she can pay later. As a matter of public convenience, drinking water facility has been provided at the kiosks. As the kiosks were open, public voluntarily went inside them to verify their documents.

Till about 11 am, over 4,500 people had visited the counters. Officials told Star of Mysore that while the number of people visiting the counters was high, payment of penalties has been bare minimum as many opted for a deferred payment. Such voluntary kiosks will be opened for a month and a call would be taken after seeing public response.

No force at any point

City Police Commissioner Dr. Chandragupta has instructed the Police that these centres are purely voluntary and at no point vehicle users are stopped and forced into the counters to check the documents and pay the penalty.

To ensure smooth traffic at main circles, junctions and road intersections, Policemen above the rank of Assistant Sub-Inspector (ASI) till the rank of Inspector can ‘adopt’ one circle or junction and spend at least one hour in a day to streamline traffic. The officer who adopts the circle or the junction would be fully responsible for the smooth traffic flow and officers who maintain the areas well would be rewarded.

Visible violators to be penalised

Priority would be given to ensure that there is a smooth flow of traffic on all city roads and the Policemen are barred from intentionally stopping vehicles just to check documents. But this cannot be taken for granted as all the visible violations would be checked and violators would be penalised.

For example, if any vehicle user is found speaking over phone while driving, if he/she is not wearing a seatbelt, indulging in drunken driving, transporting passengers in goods vehicles, allowing minors to drive, signal jumping, violating the one-way rule, altering vehicle silencer and all such visible violators would be penalised.

Traffic violation teams are banned from entering a particular area and stopping vehicles all of a sudden. They have been instructed not to place barricades for checking vehicles, using lathi to beat bikers. Staff have been instructed to behave politely with commuters and not to raise their voice, speak abusive language and insult commuters even if they are under tremendous pressure. All these violations by Policemen would attract departmental punishments.