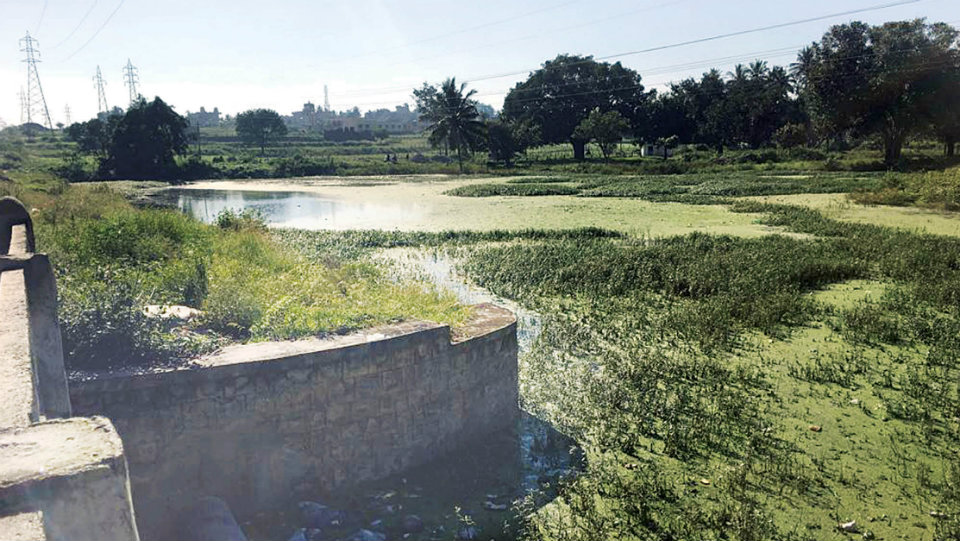 Mysuru: Among the oldest Lakes in Mysuru outskirts are Hinkal, Alanahalli, Lalithadripura, Nachanahalli, Koorgalli, Kergalli and Bommanahalli Lakes. While almost all these Lakes are in a dying state thanks to encroachment, pollution and rapid industrialisation, the Koorgalli Lake is probably destined to die early as lakhs of litres of industrial effluents and sewage flows into the Lake on a day-to-day basis.

The 21-acre Koorgalli Lake is located on the Krishna Raja Sagar (KRS) Road between KRS Road and Excel Public School. Probably the first government agency that dealt a death blow to the Lake is Karnataka Industrial Development Board (KIADB) that cut the vast lake into two parts to build a Double Road that links Lingadevarakoppalu and Maidanahalli. The two-kilometre road cuts through the Lake right in the middle dividing the water body into North and South. Both the Southern and Northern parts of the Lake are victims of pollution.

Lakhs of litres of effluents and chemical-laced industrial waste from industries located at Belawadi and Koorgalli flows into the Lake. Added to this, sewage and drainage water flows into the Lake making it unfit for consumption. Residents of the area say that it is sure death if one drank its water.

The Lake bund is filled with construction waste with trucks dumping debris there every other day. The Lake is located on a Government land and comes under Koorgalli Gram Panchayat. Earlier, the Lake was full of birds and there were years when migratory birds used to flock to roost. Easy availability of fish in plenty was alluring to the birds. Gradually, the Lake lost its lustre and fish population died and birds too stopped coming here, say the villagers.

At the Northern side of the Lake, Koorgalli Gram Panchayat has dug a borewell to supply water to villagers. This water is being used by the villagers for washing purposes as it is unfit for human consumption.

Villagers say that there was a Rajakaluve from Belawadi that supplied natural water to the Koorgalli Lake. The Rajakaluve, was however, closed and the water link was permanently severed. Village Accountant of Maidanahalli Circle Shivappa told Star of Mysore that sometime back the KIADB and Gram Panchayat had conducted a joint survey of the Lake.

“During the survey, we realised that there is not much of encroachment of the Koorgalli Lake. There is some encroachment by the village graveyard and the villagers have assured us that they will vacate the land if the Government has plans to rejuvenate the Lake.

He revealed that one year back, the Revenue Department had asked the Mysuru District Administration to provide a status report on the existing lakes in Mysuru. “Since the Koorgalli Lake falls within my jurisdiction, I had reported that entry of the sewage into the Lake must be stopped and the Lake can be rejuvenated,” he said.

The Karnataka Urban Water Supply and Drainage Board (KUWS&DB) had constructed a Sewage Treatment Plant (STP) at Yelwal. “If an STP is established at Koorgalli Lake to block and treat sewage before it flows into the Lake, it will prove a lot more beneficial to Koorgalli Lake,” Shivappa added.

Panchayat has no funds

Basavanna, Panchayat Development Officer of Koorgalli says that the Panchayat has no funds to develop or rejuvenate the Lake. “Software companies and Industries must come forward to save this dying Lake. Like Infosys, through its Corporate Social Responsibility (CSR) Funds, has brought life back into Hebbal Lake and JK Tyre has rejuvenated the Tavarekatte Lake. We have already discussed the issue with the Mysuru Deputy Commissioner and the process is on,” he explained.

Tahsildar T. Ramesh Babu said that a survey of Koorgalli Lake will be conducted by the Revenue Department in another 15 days and all encroachments will be cleared. “We have got directions from Chamundeshwari MLA G.T. Devegowda and Zilla Panchayat CEO K. Jyothi to save the Koorgalli Lake. We will survey and fence the Lake after evicting encroachers,” he added.