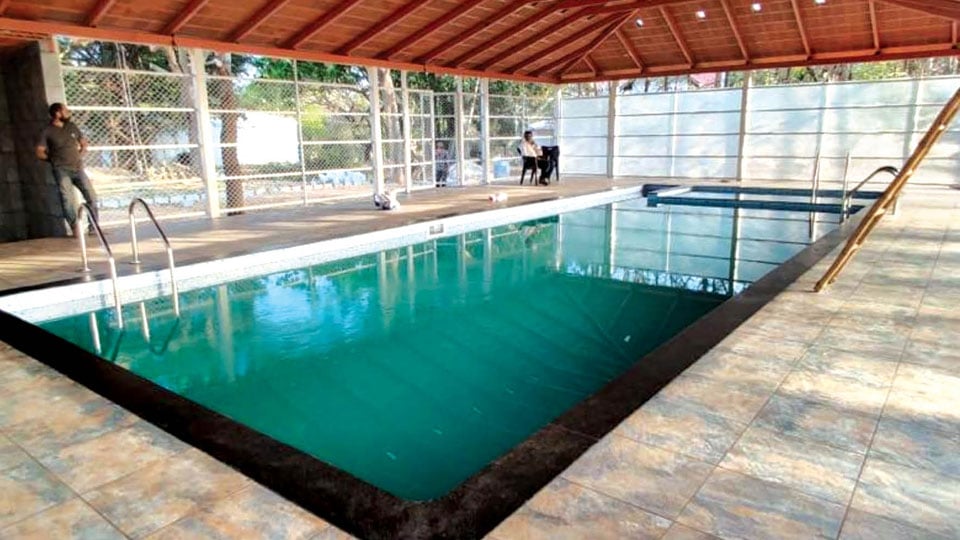 Mysore/Mysuru: Rohini Sindhuri, the IAS Officer transferred out as Mysuru Deputy Commissioner on Saturday, has defended the construction of an indoor swimming pool at the official DC’s residence on Hunsur Road.

In a letter dated June 5 to Regional Commissioner (RC) Dr. G.C. Prakash, who has been asked by the State Government to probe the swimming pool construction amidst a hue and cry by political leaders, she has clarified that the swimming pool has been constructed by Nirmithi Kendra Society as a demonstration of low-cost technology. The DC’s residence is called ‘Jala Sannidhi and it is a heritage property.’

“Nirmithi Kendras are set up in each district to take up construction and building projects with the use of locally available materials by adopting low-cost, effective technology. They execute pilot projects to prove the efficacy of the technology before implementing it as a general programme. As per this mandate, swimming pools were planned at the district and taluk levels about five years ago and were assigned to Nirmithi Kendra, Mysuru,” Sindhuri wrote in her letter.

The idea was to prove the efficiency of locally available resources by adopting cost-effective technology and then extend to all taluks. The same has been done in conformity with the prescribed procedure by Nirmithi Kendra with due approval in the annual general body meeting, she has stated.

“The residence of the DC is housed in about 5.15 acres campus and the pool has been constructed on a small piece of land in the campus which is unconnected with the heritage building. Therefore, the allegation in this regard is also totally false,” she stated.

Sindhuri has mentioned that in a similar fashion many other buildings in similar campuses have also been constructed. For example, Election Branch at Mysuru City Corporation Office, inside Vasantha Mahal campus, Chamundi Meeting Hall in the campus of RC Office and PWD Building at Jaladarshini Guest House. None of these constructions in the campuses constitute any violation of any heritage building which remains untouched, Sindhuri has pointed out.

Issue discussed in Nirmithi Board : The respective Deputy Commissioners of the districts will be Chairman of Nirmithi Kendra Society. Speaking to Star of Mysore on the issue, Nirmithi Kendra Director Manjunath said that the pool was constructed in the premises of DC’s residence on a trial basis and there was a plan to extend it to all Taluks to demonstrate the cost-effectiveness.

“The proposal was placed before the Nirmithi Kendra Society Board and was approved there. We got oral instruction from the DC to construct the pool at the DC’s bungalow and we went ahead with the project,” he said.

When asked if permission was sought by the Government for the project, Manjunath said, “The project was initiated by Nirmithi Kendra and as there is no practice of seeking Government permission for locally-approved projects, permission was not sought for this.”

On why the pool was constructed at Jala Sannidhi instead of many other Government buildings having big campuses like Regional Commissioner’s residence, Jaladarshini and Government Guest House, the Manjunath said, “We cannot disobey the orders from the higher officers. I can only say that orders were followed. The rest has already been stated in the letter.”

He has filed for details under the capacity of advocate and auditor and has submitted the application to the Public Information Officer, Deputy Commissioner’s Office. He has sought information on the swimming pool and gymnasium, their construction cost, duration of construction period, photographs, under what grants the works was taken up and the permission granted to design the project. Regarding NDRF, he has sought details of total amount released from the Centre, expenditure, invoices, payment with tax invoices and cash balance and bank balance as on June 2, 2021.

2 COMMENTS ON THIS POST To “Pool at DC’s residence was a Nirmithi Kendra Project: Rohini Sindhuri”