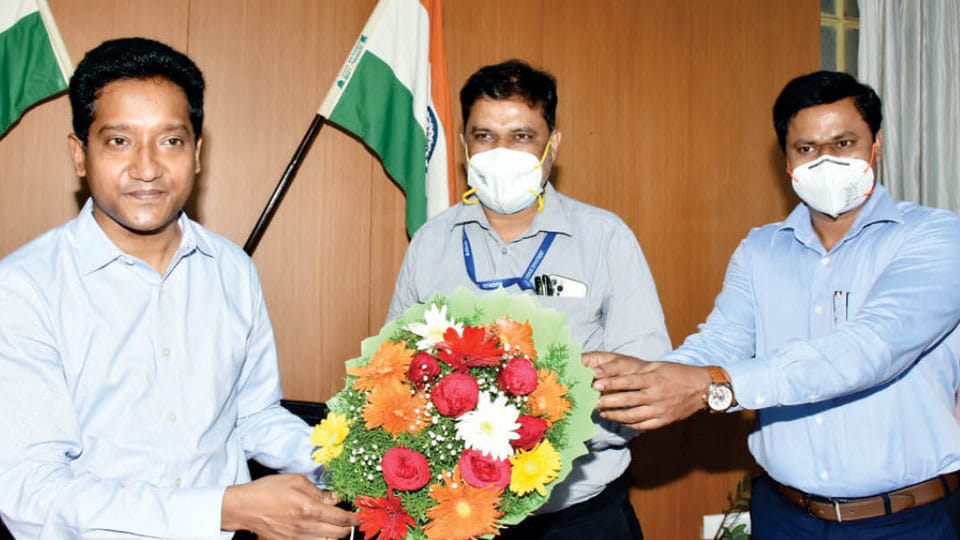 Later speaking to presspersons, Dr. Bagadi Gautham said that his appointment as Mysuru DC came unexpectedly to him. Noting that his job is a challenging one, especially when COVID-19 pandemic is on a rampage, he said that tackling the dreaded pandemic would be his first priority.

Maintaining that he will continue the initiatives already in place, he said that he will bring about suitable  changes in accordance with the needs of the people. Stating that he was always open to useful suggestions and tips from the general public and organisations, the DC said that there are complex issues in every district and Mysuru is no exception.

Asserting that he will work towards upholding the dignity of the DC’s office and that of the Government  by functioning in a transparent,  people-friendly and accountable manner, he observed that many problems can be solved by taking into confidence  people’s representatives and all concerned stakeholders.

Replying to a question on whether he got prepared while coming to Mysuru, he said that he has the experience of serving in 3 districts.

Stating that he has already talked to the outgoing DC, the previous and new MCC Commissioner and ZP CEO, he said that he will hold a meeting with top district officials in a couple of days and receive inputs on COVID situation and other administrative issues.

Contending that any changes cannot take place in a couple of days, he recalled his visit to the city a couple of years ago when he met the then DC Abhiram G. Sankar. He also reminisced  on his days in Mysuru when he trained at Administrative Training Institute (ATI).

Replying to a question on whether he was in the hotseat, Dr. Gautham said that he has no record of any controversies in his 12-year career in civil service. Maintaining that he is a low-profile officer, he wondered whether the people of Mysuru knew his name.

Asserting that he would work with commitment and honesty, he said that he hopes to get the support of everyone by working in a fair and transparent manner. He  further said that he has got co-operation wherever he had worked earlier. A 2009 batch IAS Officer, 40- year-old Dr. Bagadi Gautham had served as DC of Raichur, Chikmagalur and Davanagere districts and as Belagavi ZP CEO.

Soon after Dr. Bagadi Gautham assumed charge as Mysuru Deputy Commissioner (DC) yesterday afternoon, his Mandya counterpart S. Aswathi, who happens to be his wife, wished him all success in his new posting.

Speaking to presspersons in Manyda yesterday, Mandya DC Aswathi said she has wished Dr. Gautham all success. Stating that she felt happy about her husband coming to the neighbouring district of Mysuru as DC, she hoped that the people of Mysuru will see better days.

After IAS couple  C. Shikha and Dr. Ajay Nagabhushan, who were DCs of Mysuru and Mandya, respectively a few years ago, it is Dr. Bagadi Gautham and his wife Aswathi who are holding the DCs Office in the two neighbouring districts.  Aswathi was posted as Mandya DC in February this year.