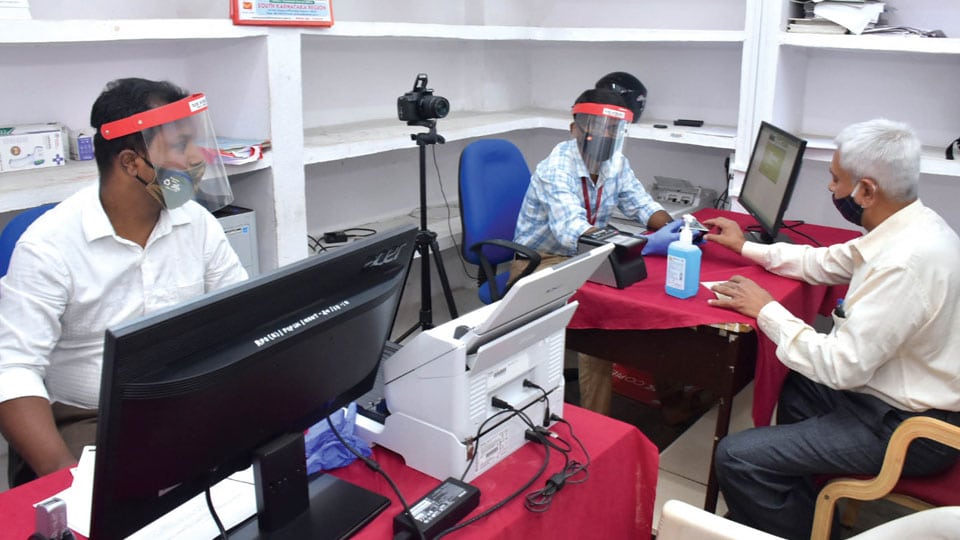 Mysore/Mysuru: The Post Office Passport Seva Kendra (POPSK) at Metagalli in city resumed its activities this morning. This Kendra had remained closed for five months after the Centre had announced lockdown on Mar. 24 due to Covid.

When the Kendra was about to re-open a few weeks earlier, after the lockdown was being lifted in a graded manner, one of the verification officers tested Corona positive and had been admitted to hospital for treatment. The Kendra had remained closed as a precautionary measure. Now, as the officer has fully recovered, the Kendra resumed its activities after receiving permission from the Regional Passport Kendra, Bengaluru. Though not a full-fledged centre like in Bengaluru, Passport Seva Kendra at Metagalli has been catering to the needs of people in an extended part of the Post Office as POPSK. The Kendra has not only helped Mysureans but also people living in neighbouring districts of Kodagu, Hassan, Chamarajanagar and Mandya in getting their passports on time.

After Mysuru city got its own permanent Passport Seva Kendra, before lockdown, over 70 people used to visit POPSK in Mysuru every day for getting fresh passports, renewal and other related services.

Before Mysuru got its own Passport Seva Kendra, people had to travel to Bengaluru to apply for fresh passports and other issues. Now, people can apply online, visit the Mysuru POPSK for verification of documents on a stipulated date given by Passport authorities and get the passport by Speed Post within a span of 15 days.