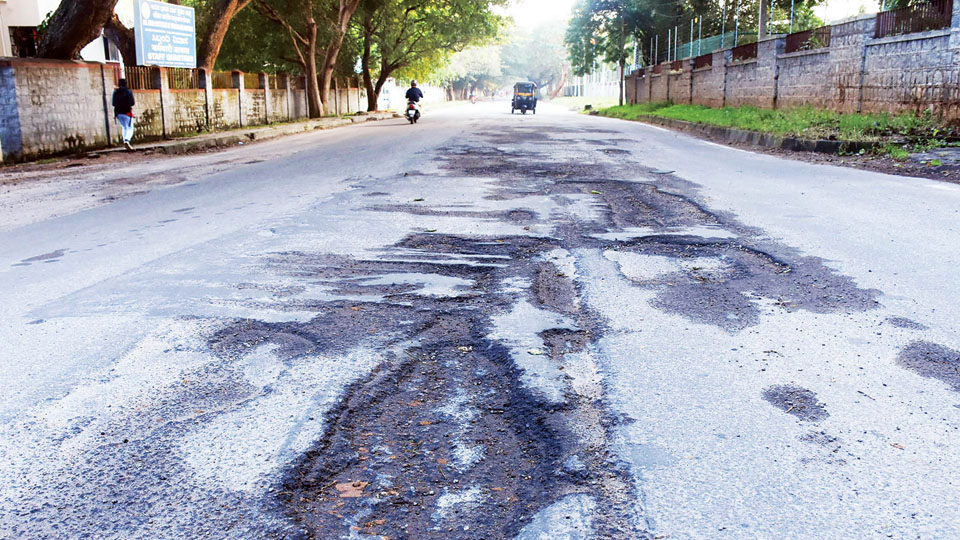 Pothole-ridden roads a nightmare for motorists

Mysore/Mysuru: Incessant rains battering the city for the past one month has damaged all major roads, leaving the Mysuru City Corporation (MCC) with a gaping hole in the budget.

First of all, only patchworks were taken up during Dasara instead of repairing the damaged stretches in a full-fledged manner. Now even the patchworks have given away, pointing fingers at poor quality of works and the way how hotchpotch works were undertaken in a tearing hurry.

More frustrating for citizens is the re-emergence of potholes on the recently repaired roads as rains have washed away asphalt. Two-wheeler riders are bearing the brunt of potholed roads as they are sure to lose balance navigating such roads.

The situation gets worse as it rains in the evenings when office-goers and students are in a hurry to reach homes. Though ordering food parcels from hotels has picked up post-pandemic as most people prefer to stay indoors, life has become miserable for food delivery boys as they have to travel on such roads rain or shine to deliver food to customers.

Thanks to bad and non-motorable roads, citizens mocking the infrastructure on social media and circulating memes and invitations for dirt racing have increased these days.

The asphalt on Chaduranga Road that links JSS Science and Technology University to Thonachikoppal has been washed away and this road is primarily taken by students and teachers. Whenever it rains, slush-mixed rainwater collects on the road and students have fallen off from their two-wheelers.

Roads are also in a pathetic condition from Vijayanagar Water Tank towards Krishnadevaraya Road, Contour Road in Gokulam, from Agrahara till Basaveshwara Road, Sahukar Chennaiah Road in Thonachikoppal and Kuvempunagar Bus Depot Road.

The Shivarampet Road is busy from morning till late in the night and almost every shopper on Sayyaji Rao Road and D. Devaraj Urs Road invariably ends up on the Shivarampet Road. A crater has been formed on the road near the Shringar Hotel and one careless move could land up vehicles in the deep ditch.

A lot of money has been wasted in re-laying the same roads multiple times, due to lack of coordination among road engineers. Fed up with multiple excuses and repeated extension of deadlines, citizens are demanding immediate action.

“It takes me 30 minutes to cover 1,000 metres and this is not because of the traffic, but the potholes, and non-motorable city roads,” said P.U. Suraksha, a student who takes the Chaduranga Road to reach her College daily.

Rains need to stop for repairs: The MCC is planning to seek special grants under the State Relief Fund to fix the damage as crores of rupees are needed for the same. Also, the works may not start immediately as the civic body has decided to carry out works only after rains stop completely.

“We can start asphalting only when the roads are free from moisture. This requires three to four days of continuous non-rainy days. Whatever is the quality of the bituminous mixture, if the receiving layer is not dry, the work tends to go to waste,” said an officer from the MCC.

“We are seeing low-intensity rains for a longer duration almost on a daily basis, which is highly detrimental to roads. We cannot repair the roads during this time and we have seen what happened to the patchworks that were undertaken for Dasara,” he added.