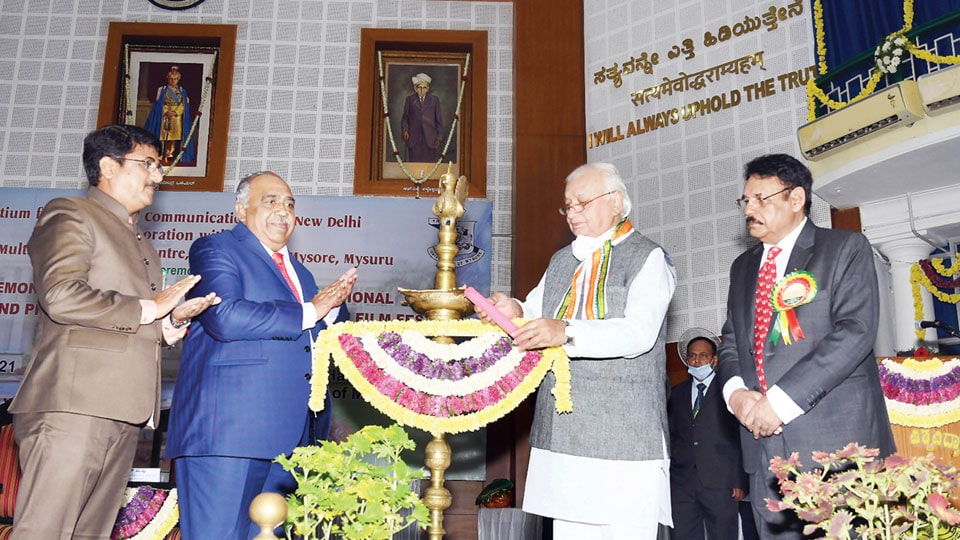 In his address, Arif Mohammed Khan emphasised the need for digitalisation. He urged all State Universities to imbibe the benefits of internet-based education. “Digital is the future. It is less expensive and has more reach and wider impact. Universities must work towards introducing online classes and examinations in their teaching departments within a time-frame as the first step towards realising the goal of anytime-anywhere classes and examination system,” he said.

The COVID pandemic has taught many lessons and among them is fully implementing digital education. “Earlier, we were hesitant to implement digital mode of education and now we are forced to do so. Digital is the future and the CEC is doing tremendous work in this direction,” he added.

“Online pedagogical techniques will enable teachers and trainers to integrate research and teaching with digitally-enabled education and render online classes more productively in tune with outcome-based education approach,” he noted.

On NEP, he said, “The world is changing at a lightning pace, with ground-breaking technologies turning obsolete overnight. In such a scenario, our approach should be proactive and imaginative, guided by the motto of invention, innovation and improvement,” he said.

He called upon all Universities to ponder over the challenges and the way forward to take higher education to new heights.

Mentioning that he was visiting the University of Mysore for the first time, the Kerala Governor said, “Whenever I think of this University, I remember Sir Brajendra Nath Seal, who was a philosopher of international reputation, a great visionary and an educationist of rare quality. He was a renowned scholar and an eminent professor of philosophy in Calcutta University and Vice-Chancellor of Mysore University for about a decade (from 1921 to 1930).”

“I also recall his better-known classmate and friend Narendranath Dutta, the future Swami Vivekananda and I am sure that the University of Mysore was built with a strong foundation of values, ethics and morality,” he noted.

The CEC annually organises educational video competitions to nurture, encourage and recognise the excellence in educational video programme production to make the youth aware of issues related to the environment, development, human rights and Swachh Bharat.

The 1st Prakriti Festival was organised in 1997 and since then has been planned as an annual event. It brings together filmmakers, students, academics, administrators, development workers and media and appreciates the artistic genre of documentary filmmaking.

This year, the joint award-cum-screening of CEC’s Educational Video Competition will be held on Nov. 24 and 25 and the Prakriti Film Festival’s screening sessions on Nov. 26 and 27 at Vijnana Bhavan Auditorium in Manasagangothri campus.