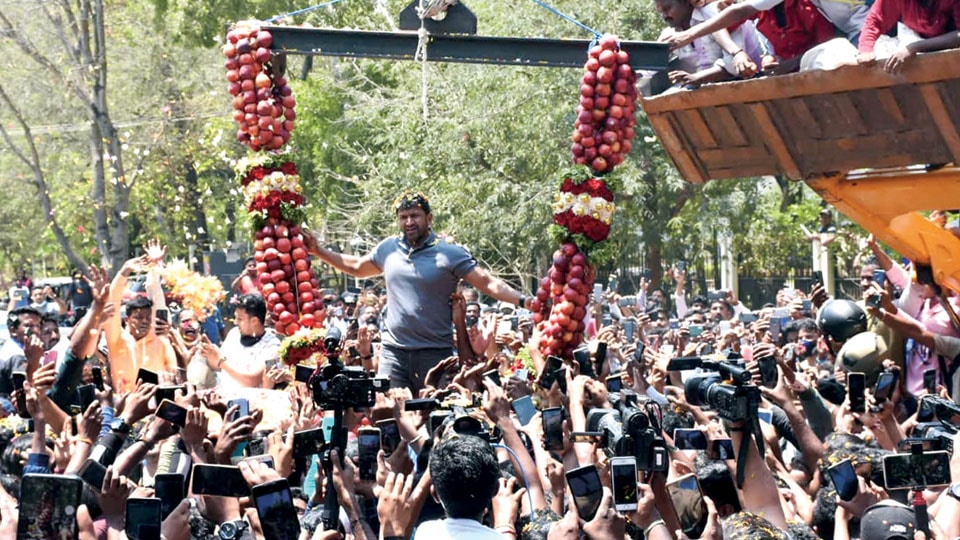 Mysore/Mysuru: The Open Air Theatre at Manasagangothri in city was flocked by hundreds of fans, a majority of them youths,  this morning  for the promotional  event of Power Star Puneeth Rajkumar starrer ‘Yuvarathna’ cinema, which is slated for global release on April 1.

The fans burst crackers and showered petals on the actor as soon as he arrived at the venue. Puneeth was given a thunderous welcome and was garlanded with a huge apple garland, which was lifted by a crane. The traffic on the road running in front of the Open Air Theatre was disrupted for sometime as youths crowded the roads to have a glimpse of the actor.

However, all COVID-19 norms such wearing of face mask, following of physical distancing and maintenance of hand hygiene went for a toss, as most of the youths seemed to have no worry for adhering to the COVID-19 norms in place. The Police had a hard time in regulating the crowd.

After receiving a rousing welcome, Puneeth Rajkumar arrived on the stage and interacted with his fans on his upcoming cinema ‘Yuvarathna.’

Addressing the fans, Puneeth Rajkumar said that the mention of the name ‘Mysuru’ reminds him of the erstwhile Mysore Maharajas. Maintaining that his family has great respect and adoration for the Maharajas, he said that his family’s ancestral house at Gajanur in Chamarajanagar district is adorned with numerous photos of erstwhile Mysore Maharajas. He also recalled his earlier visits to the Open Air Theatre along with his father Dr. Rajkumar and several other events which he took part at the venue.

Asserting that ‘Yuvarathna’ film is made for the youths, he sought the co-operation of everyone for making the cinema, which is slated for global release on April 1, a huge success.