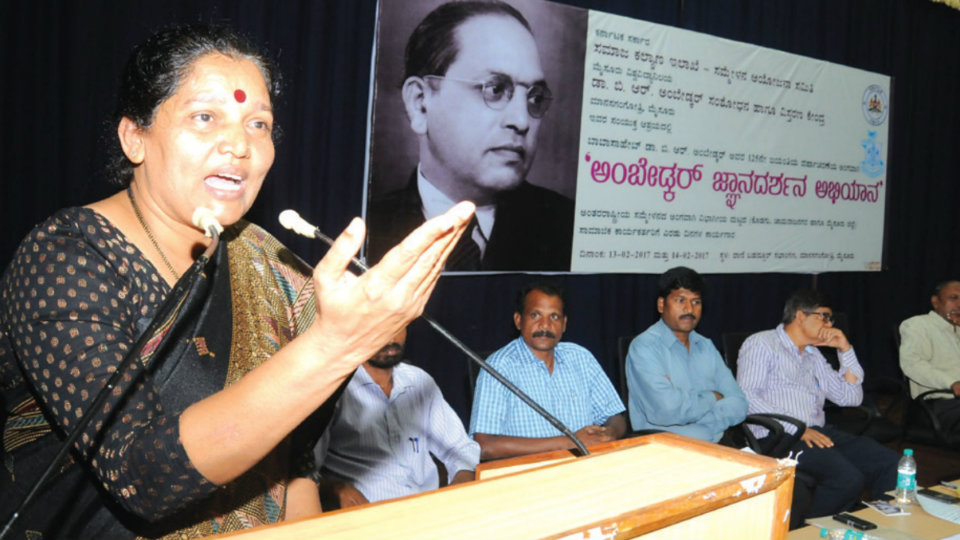 Observing that Dr. B.R.  Ambedkar was a great leader of entire society, KPA Deputy Director Dr. Dharanidevi Malagatti said that most of the social issues that are haunting the nation today would have been addressed if Dr. Ambedkar’s thoughts and principles were properly analysed and implemented practically.

She was speaking at the valedictory of the 2-day workshop on ‘Ambedkar Jnana Darshana Abhiyana,’ jointly by the Department of Social Welfare and Dr. B.R. Ambedkar Research and  Extension Centre of Mysore University as part of the 125th birth anniversary celebrations of Dr. B.R. Ambedkar, at Rani Bahadur Auditorium in Manasagangothri here yesterday.

Noting that Dr. Ambedkar strongly believed that inter-caste marriage was the only way for eradication of casteism, Dr. Dharanidevi said that, however, a section of the Dalit society was against the move as it apprehend that the benefits of reservation may go to others.

Stating that such programmes and workshops would greatly help in understanding Dr. Ambedkar much better, she stressed on the need for bringing out short-story books on Dr. Ambedkar so that his thoughts can be successfully spread among children. She also called for addressing the  short-comings in the implementation of schemes and programmes introduced by Social Welfare Department.