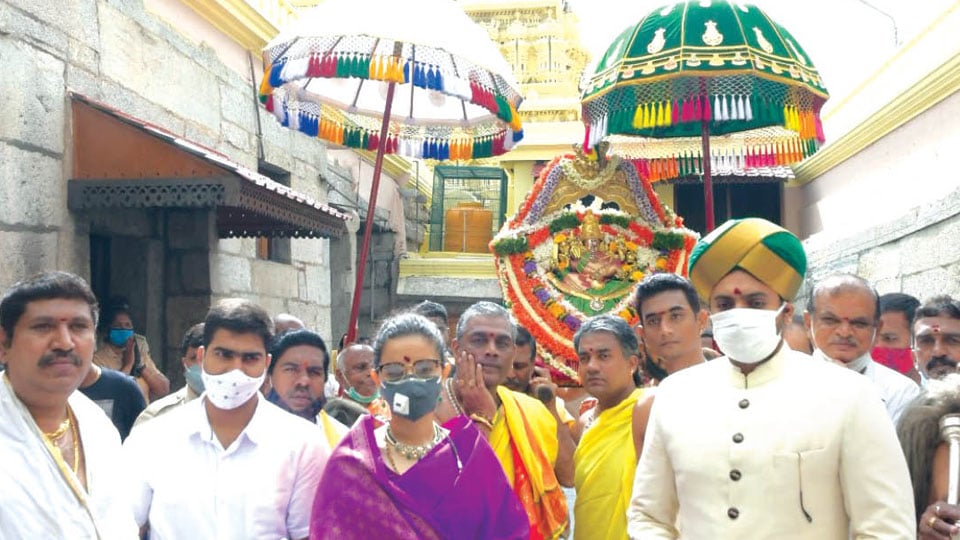 Mysore/Mysuru: ‘Sri Chamundeshwari Vardhanti’ was held in a simple manner with all customary rituals at Chamundeshwari temple atop Chamundi Hill here this morning. The event was held in the absence of devotees, with the District Administration banning entry of devotees and vehicles to the Hill temple as a public health safety measure to stop the spread of COVID-19.

Every year, thousands of devotees from across the State used to throng the temple on this special day during the Ashada month.

Today, the puja began as early as 4 am with the performance of  Abhyanjana, Rudrabhisheka, Panchamrutha Abhisheka, Pushparchane and all other associated rituals. After all the rituals were completed at about 7.45 am, the temple was opened at 8 am for ‘Prakarotsava.’

Titular head of the erstwhile Mysore Royal family Yaduveer Krishandatta Chamaraja Wadiyar and his wife Trishika Kumari Wadiyar launched the main ritual ‘Prakarotsava’ during which the specially-decorated presiding deity was taken around in a procession inside the temple premises. After completion of all other rituals associated with ‘Vardhanti’, the temple was shut at about 9.45 am. Pujas and rituals were performed by a team of priests led by Chief Priest Dr. N. Shashishekar Dikshit.

The customary ‘Darbarotsava’ of  Goddess Chamundeshwari will take place in the temple premises at 7 pm, thus formally ending the Vardhanti celebrations.

The District Administration has banned entry of devotees to the Hill temple tomorrow (July 14) and also on the last Ashada Friday on July 17.