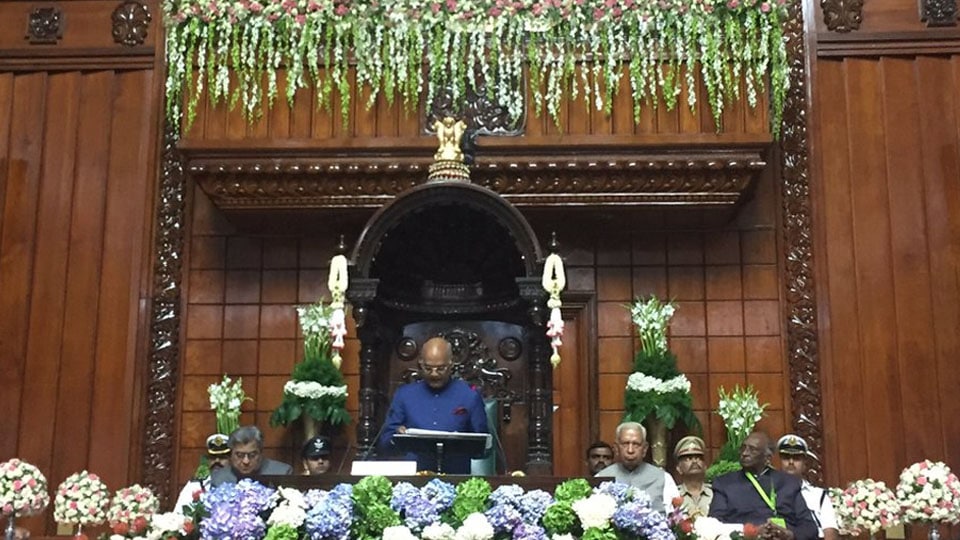 Bengaluru: It’s celebration time at Vidhana Soudha, the majestic building that towers over Bengaluru with President Ram Nath Kovind inaugurating its Diamond Jubilee celebrations and also addressing the Special Joint Session of the Legislature this morning.

Addressing the law makers, President Kovind said that it was a memorable day for Parliamentary Democracy both for the country and for him. “It is truly memorable for me as I had taken oath as President of India in the presence of both Houses of  Parliament on this very day, three months ago i.e. 25th July, 2017,” he said.

The President said, “Legislators are both public servants as well as nation builders. Anybody who performs his or her duties with honesty and dedication is a nation builder. Those who maintain this building are also nation builders. Those who provide it security are nation builders too. It is by the efforts of ordinary citizens who diligently carry out everyday tasks, that nations are built. As you sit and work in this Vidhana Soudha, I am confident you will never forget this and will continue to draw inspiration from it,” he said.

“Let us make this Diamond Jubilee not just the celebration of a proud past but a commitment to an even greater future. A future for Karnataka and a great future for India,” he added.

Dwelling on democracy and elections, Kovind said, “A rival in an election is a political competitor, not an enemy…”

“After the election, the competitor could become a colleague in the task of ensuring the well-being and development of a constituency or of our shared society. This is the beauty of a democratic polity that we must appreciate,” Kovind said.

“We are aware of the three ‘D’s of Legislature — it is a place to ‘Debate’, ‘Dissent’ and finally ‘Decide’ and if we add the fourth ‘D’ that is ‘Decency’, only then the fifth ‘D’ of a meaningful ‘Democracy’ becomes a reality.

Making a mention of Tipu Sultan in his address, the President said that Tipu Sultan died a heroic death fighting the British. “He was also a pioneer in the development and use of Mysore rockets in warfare. This technology was later adopted by the Europeans. More recently, two of our finest army chiefs — Field Marshal K.M. Cariappa and General K.S. Thimmayya — were the sons of Karnataka,” he said.

“The two Houses also represent the ideals and optimism and the energy and dynamism of the Kannadiga people and this building is a monument to the history of public service in Karnataka. It is for the Legislative Assembly and the Legislative Council to function as sacred temples of democracy, and contribute to raising the level of political and policy discourse,” he said.

Speaking on Karnataka, the President said, “Karnataka’s dreams are not for Karnataka alone. They are dreams for all of India. Karnataka is an engine of the Indian economy. It is a mini-India that draws — without losing its cultural and linguistic distinctiveness — youth from all over the country. They come here for knowledge and for jobs and they give the labour and intellect. This is how everybody gains.”

Documentaries to be screened

Today evening, two documentaries on the construction of the Vidhana Soudha and emergence of Legislature in Karnataka, directed by renowned filmmakers Girish Kasaravalli and T.N. Seetharam will be screened. Programmes depicting the art and culture of the State will be organised on the grand steps of Vidhana Soudha, also called the Taj Mahal of South.