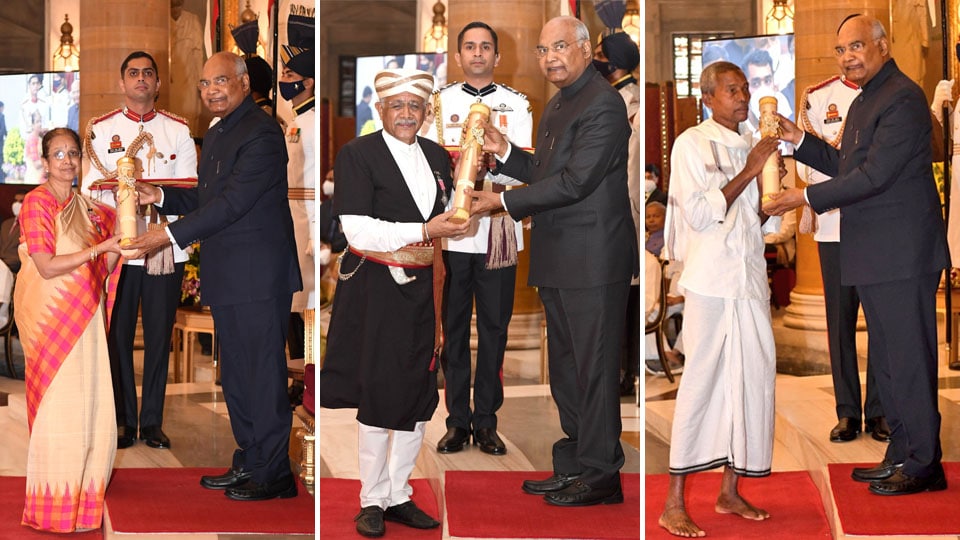 New Delhi: Vidushi K.S. Jayalakshmi, Editor of the world’s only Sanskrit daily newspaper published in Mysuru, Hockey player Dr. M.P. Ganesh of Kodagu and Harekala Hajabba, an orange vendor from Mangaluru who built a primary school with his earnings, were among 119 persons who received Padma Awards from President Ram Nath Kovind at Rashtrapati Bhavan yesterday.

A total of 119 Padma Awards comprising 7 Padma Vibhushan, 10 Padma Bhushan and 102 Padma Shri Awards were presented. 29 of the awardees are women, 16 posthumous awardees and 1 transgender awardee.

Late playback singer S.P. Balasubramaniam (Posthumous) in the field of Art and Dr. Belle Monappa Hegde for Medicine, Former External Affairs Minister Sushma Swaraj (Posthumous) are among seven persons, who were presented with the Awards.

Mollera Poovaiah Ganesh, aged 73, a resident of Suntikoppa in Kodagu, was the captain of the Indian hockey team and won the Arjuna award in 1973.

Ganesh began his sports career with football and later switched over to hockey after he joined the Army. He represented the Services (defence services) in the National Hockey Championship from 1965 to 1973. He found a place in the Indian team in 1970. Ganesh played for India at 1972 Munich Olympics, finishing third. He was one of the coaches of the Indian team that won a gold medal at the 1980 Olympic Games in Moscow.

He twice represented India in Asian Games (Bangkok-1970 and Tehran-1974). Both the times India returned home with a Silver medal. He was in the Indian team that won Bronze at the first World Cup at Barcelona in 1971 and captained the team that won Silver at the next World Cup in Amsterdam. He also played for World XI in 1972 and Asian XI from 1970 to 1974. Ganesh last played for India in 1974 after his career was cut short by a knee injury. At present, he is serving as the CEO of SAI National Hockey Academy in New Delhi.

Harekala Hajabba, 66-year-old orange vendor, received this award for bringing a revolution in rural education by constructing a school in Harekala-Newpadpu village in Mangaluru. The school currently has 175 underprivileged students from the village. Hajabba, who sells oranges at Mangaluru bus depot since 1977, has never been to school.