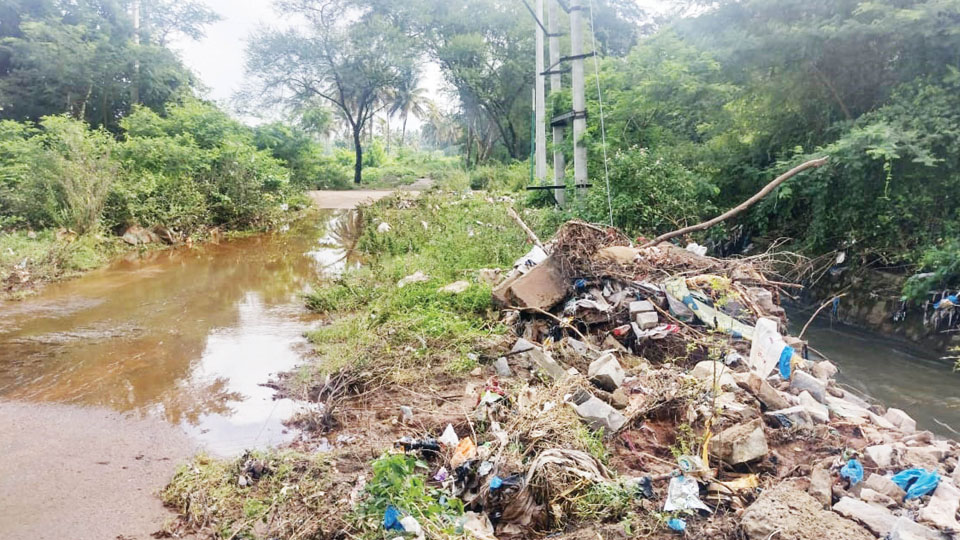 Policemen who faced Veerappan forced to live with snakes, scorpions

Mysore/Mysuru:  The apathy of MUDA officials has turned the Police Layout in Hanchya-Sathagalli ‘B’ Zone in the outskirts of city into a shelter for snakes, scorpions etc., forcing the brave Police personnel, who had taken part in Anti-Veerappan operations to live with these creatures.

The incessant rains that has been lashing the city for the past one week has only compounded the problem as the Layout has turned slushy. Further, the quarters premises, which is in a low-lying area, is flooded with sewage water.

The Raja Kaluve in which drain water from areas such as Siddarthanagar, Yaraganahalli, Alanahalli and Raghavendranagar flows, poses another problem for Hanchya-Sathagalli ‘B’ Layout that is located along the Raja Kaluve, which overflows whenever it rains heavily.

The Underground Drainage (UGD) water from nearby VTU (Vishveswaraya Technological University) Regional Centre, has only added to the problem of the residents of the Layout. The overflowing drain water, apart from emanating unbearable stench, is a breeding ground for mosquitos, flies and other insects.

Besides, most of the roads in the Layout are in poor shape, with motorists finding it difficult to travel on them.

As most of the open space in the Layout is covered by drain water, the area has become a shelter for snakes and scorpions, which has caused scare among the residents.

Some residents of the Layout told Star of Mysore that snakes and scorpions entering houses have become a common feature in their locality.

Pointing out that they are scared by the reptiles, they said that innumerable number of snakes have been caught and let into the forests. Hitting out at official apathy, they maintained they have been living in constant fear, with poisonous creatures around them.

Following the State Government’s decision to allot sites to a total of 754 Policemen, who were involved in Anti-Veerappan operations, the MUDA distributed sites to about 100 Police personnel from Mysuru, at Hanchya- Sathagalli ‘B’ Zone over 10 years ago. Subsequent to the allotment, about 25 houses have come up in the locality so far, according to retired Police Sub-Inspector D.R. Jayaswamy, who laments the official apathy to the plight of the locality residents.

This apart, the locality is facing yet another problem as the rain water that collects in the vacant space that has been reserved for the construction of a cricket stadium, gushes into the locality, turning the roads into cesspools.

Also, the water that remains stagnant has become a breeding ground for mosquitos and flies, which may cause outbreaks of epidemic diseases, Jayaswamy said adding that the stench that emantes from underground drainage is a health hazard.

He urged the authorities to take immediate measures for preventing water stagnation at the cricket stadium ground and to stop drain water flow from the adjacent VTU campus.

Govind, another resident of the Layout said that they have seen many snakes moving around in the locality.

Noting that overgrown shrubs and plants provide perfect shelter for reptiles, he argued that with a lot of snakes and scorpions around, they feel that they are living in a reptile sanctuary.

Meanwhile, MUDA Commissioner Dr. D.B. Natesh said that though the locality, which has a nameboard that suggests that it is a Police Layout, they initially believed that it was a private layout.

But after coming to know that MUDA had allotted the sites for Policemen involved in Anti-Veerappan operations, he said that he would visit the Layout soon to learn about the problems faced by the residents, adding that measures will be taken to solve the problems that the residents locality are facing. MUDA Engineer Shivanna said that recent thunder showers had resulted in the locality getting watter-logged for days. Maintaining that following complaints, the authorities have cleared blockages in storm water and sewage drains, he said that all  the problems of the locality will be addressed soon.