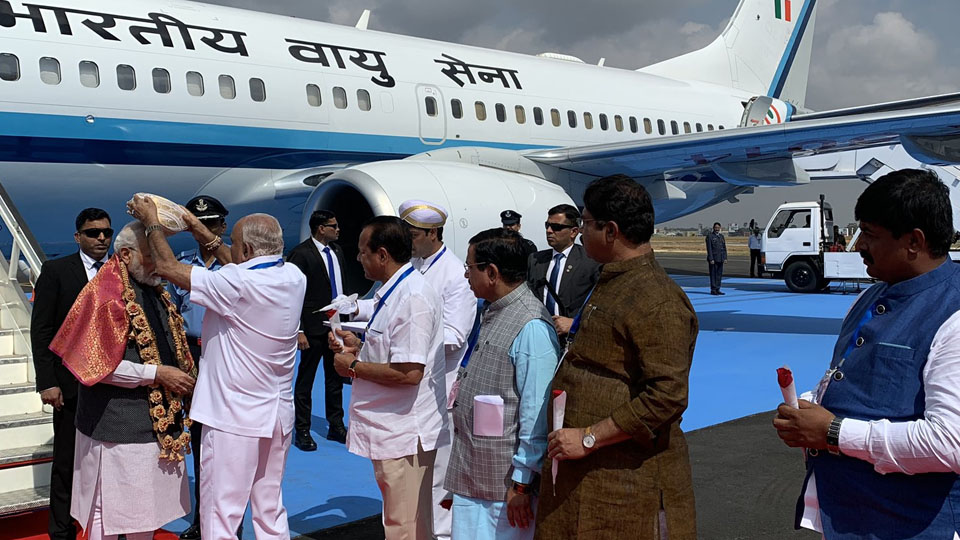 Bengaluru:  Prime Minister Narendra Modi arrived at Yelahanka Airbase in Bengaluru this afternoon for a two-day visit to the State. He left forTumakuru in a chopper to  visit the Siddaganga Mutt.

Modi will attend an event in Junior College Grounds, Tumakuru and address a gathering at the Krishi Karman Awards presentation ceremony.

In Bengaluru, Modi was received by Karnataka Chief Minister B.S. Yediyurappa. At the Siddaganga Mutt, the PM will plant a ‘Bilva Patre’ sapling, near the Gadduge (final resting place) of late Siddaganga Seer Sri Shivakumara Swamiji. The PM will later interact with students at the Mutt. He will also unveil a plaque to mark the laying of foundation stone for a memorial museum of Shivakumara Swamiji. Mutt authorities will present a silver idol of the late Seer to Modi.

After his Mutt visit, Modi will address over 1.5 lakh farmers and will launch the 4th phase of the Kisan Samman Yojana in Tumakuru and later address a farmers’ rally and take part in the Krishi Karman and Krishi Samman Awards function. He will give awards to 28 progressive farmers from 21 States.

The fourth instalment of Rs 2,000 each under the Pradhan Mantri Kisan Samman Nidhi Yojana would be released by Modi to beneficiaries across the nation by pressing a button at a farmers’ convention.

Later, Modi will inaugurate five DRDO Young Scientists’ Laboratories. After this, the PM will stay at the Raj Bhavan. On Jan. 3 (tomorrow), the Prime Minister will inaugurate the 107th Indian Science Congress at the Gandhi Krishi Vignana Kendra Campus at the University of Agricultural Sciences, before flying back to New Delhi in the afternoon.

Citing security concerns, the Bengaluru City Police Commissioner Bhaskar Rao issued a notification prohibiting the flying of unmanned aerial objects, including drones, balloons, unmanned aerial vehicles, and unmanned aircraft systems during the visit of the Prime Minister. Modi’s Special Protection Group has taken over and sanitised the places where the PM is scheduled to visit.