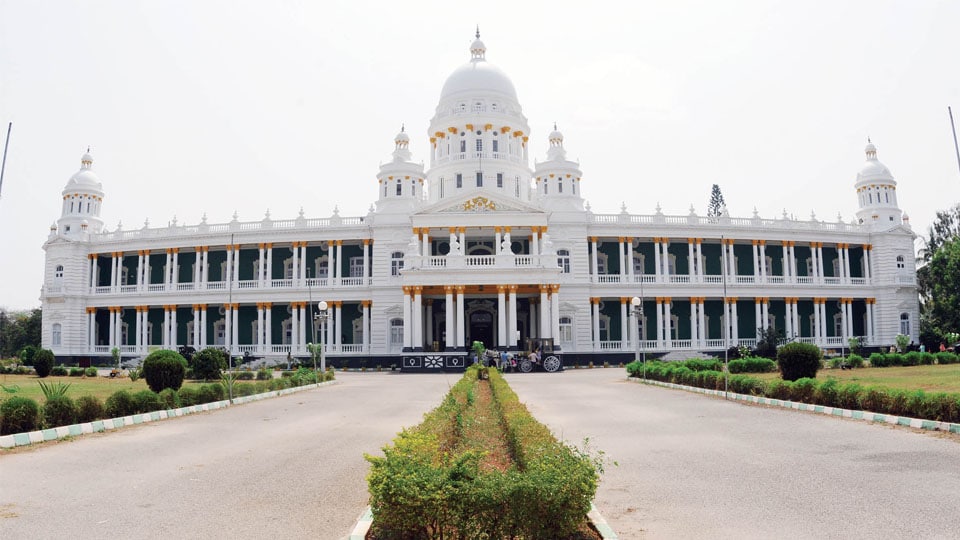 Lalitha Mahal Palace Hotel, the snob hotel of Mysuru, is in news again. This palatial hotel, consisting of 54 rooms, was handed over to ITDC in 1971. One of the prime reasons for the takeover of this Palace Hotel was the interest shown by the then Chairman and Managing Director M.S. Sundara, a Mysurean.

Since inception the hotel, a white elephant, continued to bleed year by year. The main purpose of  ITDC was to develop tourism all over India, hence the Central Government took care of all losses. The reason it could not make profits was simple.  With just 18 rooms, the hotel could not accommodate any group movement. However, an additional 32 rooms were constructed with a pool on the right side of building, not visible from front. With the addition of these rooms, the hotel’s occupancy started to improve and by 1990s it started to show reasonable  profits.

Running a heritage property is no easy task as the problems sometimes come from unexpected quarters. Take for example, the olive green colour used for the painting  of the walls. Nowadays one can get the exact colour from the dealers themselves and the mixing is done by the machines but those  days  the mixing  had to be done by hand. So it was obvious that there would be a shade difference from walls to walls.  We had no drawings of the g.I. pipes laid on the floor. So when there was  any leakage, we had to guess and dig the floors or walls. itdc or for that matter any private hotel chains had no real experience of maintaining any heritage hotel’s properties/ buildings in the 1970s.

In 1974, ITDC had paid a large amount of money to lay an exclusive line for water from Vani Vilas Water Works to the hotel. But as the surrounding Layouts like Siddartha Layout came into existence, social pressures came up and the Water Works conveniently bypassed this line to draw water for the colonies nearby, thus depriving the hotel of water required for maintaining the huge garden. That is the reason one sees the step garden absolutely badly maintained.

When I took over the property  in the late 90s, I too had no experience of managing any heritage properties. Managing a  deluxe heritage property requires certain basic qualities, acquired or inherent. Gradually this  hotel  became the flagship of ITDC rated even higher than The Ashok Hotel, New Delhi !

The downfall of this property started the day the 6th and 7th Pay Commission was implemented to the staff. Earlier the hotel’s salary and wages used to be about 12 percent of the total turnover but with the implementation of the Pay Commission recommendation, the hotel’s salary bill exploded to 35 to 40 percent of the total sales. The profits plummeted and the management had to cut down on the basic maintenance expenses to manage even the  basic  services. Gradually the downfall of the hotel started.

A blessing in disguise  for the hotel was when ITDC in its wisdom decided to hand over the property back to the State even before the lease period got over, that is 2023. The property was handed over to the State at the book price. The State also took a wise decision to run this property by Jungle Lodges, a successful PSU of Karnataka. Jungle Lodges  very cleverly retained certain vital old staff on contract and started running this property.

Now the State Government also has decided to privatise this property and give it to some reputed hotel company on ppp model. But the delay in the process of issuing the tender is  worrying. I do hope and pray that they do not dilute the tender in such a way that small local companies also  bid for the property and destroy it completely. Two major players of the market, the Taj Group and the Welcome Group, both who have experience in maintaining top class heritage properties, have evinced keen interest to participate in the tender. But what is baffling is the Government decision to spend about Rs. 8 crore on renovation before handing over the property to the new lease holders. Why should the Government spend this money? This Government is not able to renovate the Lansdowne or Devaraja Market buildings in so many years ? What is the expertise they have in  renovation of a heritage hotel?

We just do not know how long this whole process will take. But in the meanwhile the property is slowly losing its sheen and value.  Jungle Lodges do not have the expertise to maintain a deluxe property for long and this is slowly showing on the property and its services. A thali for Rs. 700 on a stainless steel plate? Plastic flowers all over the lobby? These kind of deluxe properties cannot be run on contract labour for long.

I do hope that the Tourism  Minister S.R. Mahesh, who happens to be from Mysuru, hastens the process of tender so that this  property  is given  to a  world class  player who knows how to maintain these kind of  heritage buildings and make money out of it too. Like Taj Falaknuma Palace in Hyderabad !

Let the tender have tough conditions to ensure that the heritage  look  of the building is not altered by the new lessee. All the renovation plans should be approved by the Government Expert Committee before it is implemented. Fair deal. Do you agree ?