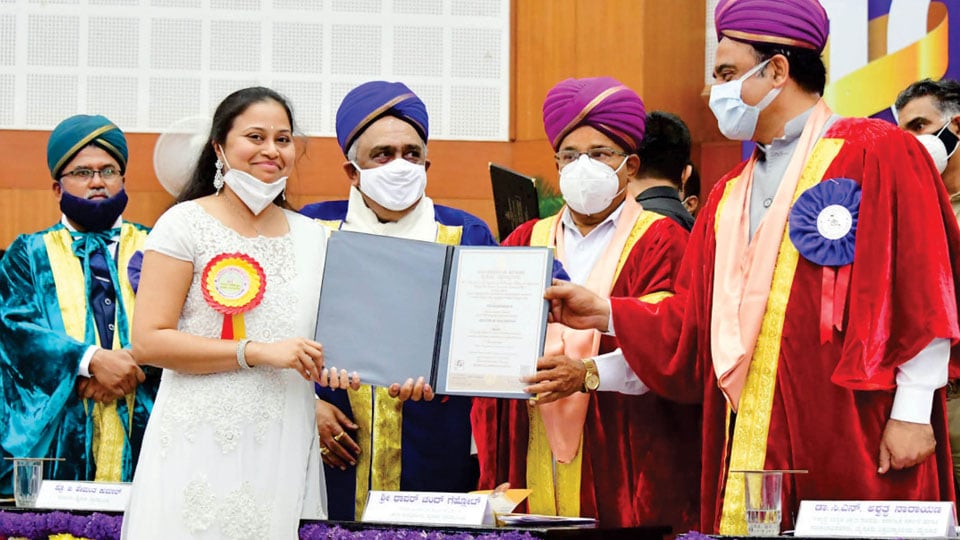 Doctorate degree for her 100 years of film music research with more than 1,000-page thesis

Mysore/Mysuru: Playback singer R. Priyadarshini has been awarded Ph.D in Music by the University of Mysore (UoM) for her thesis ‘Music in Kannada and Tamil Cinema – A Study’ submitted under the guidance of Dr. C.A Sreedhara.

She is considered to be the first Indian playback singer to present a longest doctoral thesis of 1,000-plus pages in her research study pertaining to 100 years of Cinema Music. This is also regarded as the sourcebook for the film music study.

She received her Ph.D certificate from Governor-Chancellor Thaawarchand Gehlot and Higher Education Minister Dr. C.N. Ashwathnarayan during the 101st convocation of the UoM held in Mysuru recently.

Explaining why she chose ‘cinema music’ for her research study, she said: “It was a burning vision for me to create an indigenous resource of 100 years of Cinema music study (1917-2020) which includes the special qualities, musical intricacies, music in different aspects, background scores, few song analysis which works towards preserving, creating awareness of the Tamil and Kannada Film Industry’s cinematic music legacy. I have worked with many legendary Music Directors for more than 110 movies as a singer. I always felt the need for a reference source specifically on cinema music which led to my research. This will certainly be a source of knowledge for future generations, musicians, singers, artistes, technicians and others to understand the significance of film music, its evolution, its multi-dimensional aspects and its development.”

Stating that she intends to publish her thesis as a book, she said: “I am also trying to translate this from English to other languages. Since it is the longest thesis in film music, I am planning to send it to the Guinness World Records & Limca Book of Records.”