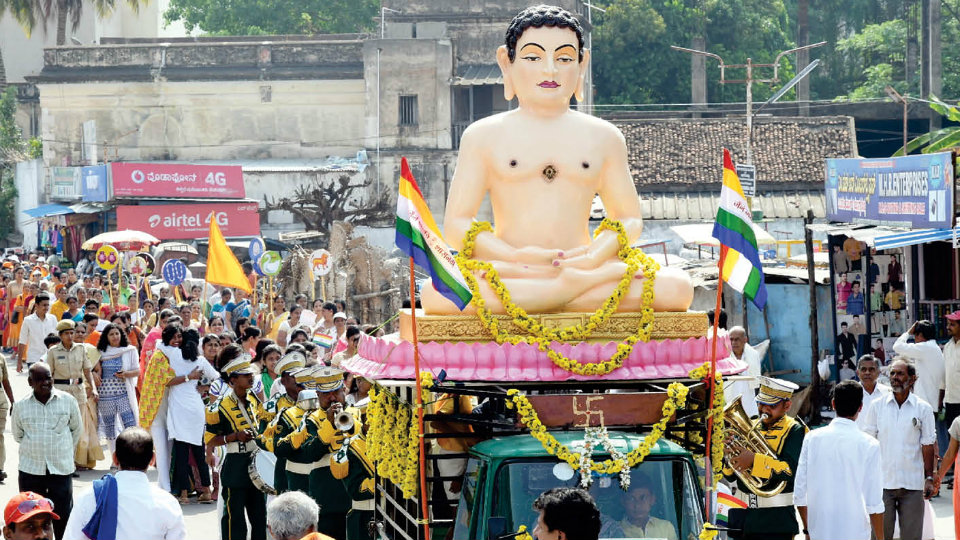 Mysuru – Amidst singing of hymns, dancing and chanting slogans of peace and harmony, hundreds of Jain community members including various Jain Mahila and Jain Youth organisations, celebrated Mahaveer Jayanti with gaiety and religious fervour in city this morning.

Digambar Jains, under the banner of Mahaveer Seva Samsthan, Mysuru, took out a colourful procession with a big statue of Lord Mahaveer placed atop a vehicle, followed by a chariot with the idol of Lord Mahaveer which was offered puja.

The procession, which commenced from Vardhamanaiah Smarak Bhavan near Sangam Theatre in Halladakeri, passed through the Clock Tower, Ashoka Road, Nehru Circle, Halladakeri and surrounding places before culminating at starting point.

Svethambar Jains, under the banner of Sumathinath Jain Svethambar Murthy Pujak Sangh, also took out a procession from Mahaveer Bhavan near Sangam Theatre. The procession with Indra Dwaja in the front, followed by a palanquin with a decorated idol of Lord Mahaveer placed in it passed through Ashoka Road, Nehru Circle, Chandragupta Road and surrounding places before culminating at the starting point. 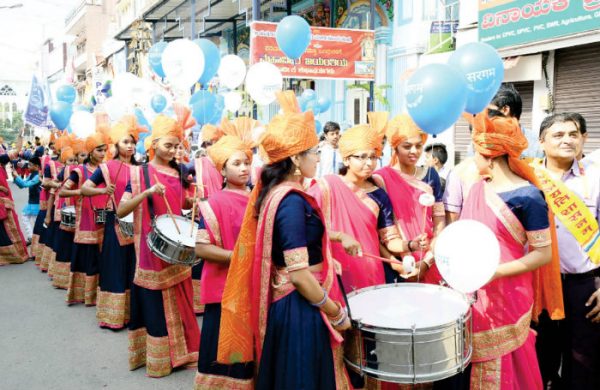 Girls of the community taking out a colourful bandset march on the occasion.

The community members danced all along the procession route to celebrate the occasion.

Various Jain Temples across the city including Kote Basadi on New Sayyaji Rao Road and Jain Dadavadi Temple on Thyagaraja Road, were specially decorated for the occasion.

Many Jain organisations will hold cultural programmes and competitions for its members later in the day. Mahaveera Ahimsa Prashasthi Pradan function will be held in Vardhamanaiah Smarak Bhavan at 7 pm in which Sri Bhuvana Keerthi Bhattaraka Swamiji will grace the occasion.

Mahaveer Jayanti commemorates the birth anniversary of Lord Mahaveer. On the festive morning, the idol is given a ceremonial bath and the deity is carried in a procession.