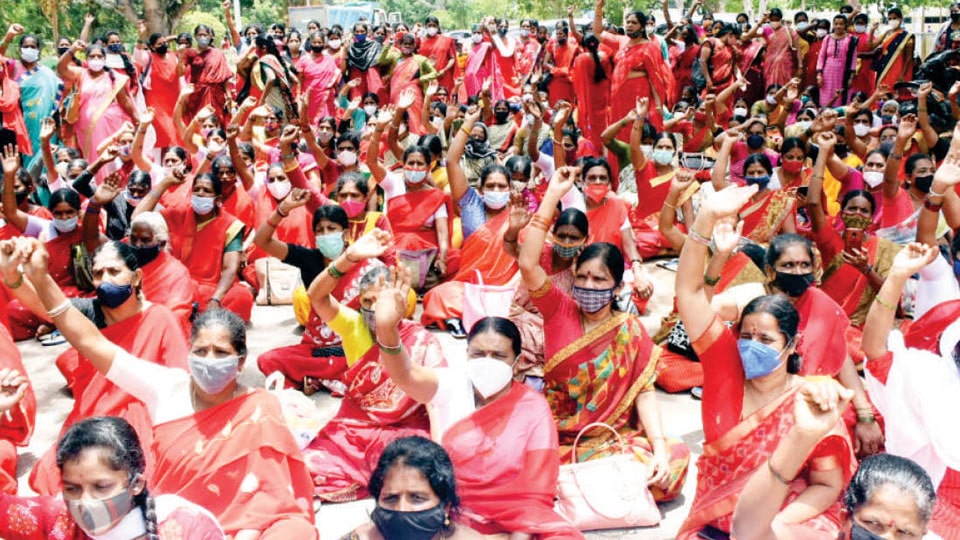 The demands include immediate release of Rs. 340 crore grant by the Government to Women and Child Welfare Department for providing various facilities to Anganwadi workers and helpers, a hike in monthly wages, especially for those who are serving for more than 10-15 years, to give them eggs along with other groceries for distribution, ex-gratia payment of Rs. 30 lakh in case of death of Anganwadi workers while performing COVID-19 duties, just like other Corona Warriors are being paid, Rs. 1 lakh compensation in case of developing stress due to COVID-19 work and mandatory establishment of Pre-primary Classes at all Anganwadi centres, among others.

The protesting Anganwadi workers also sought a probe into alleged kickbacks received by a Minister who earlier held Women and Child Development portfolio and resignation of the accused Minister from the State Cabinet.

The protesters warned of intensifying their protest from Aug. 23, if the Government failed to act on their just demands by then.

On the third day of the stir today, a good number of Anganwadi workers from H.D. Kote and Mysuru taluks took part in the stir. The Association office-bearers H.S. Sunanda, Leelavathi, Pushpalatha, Manjula, Ajitha and others were present.