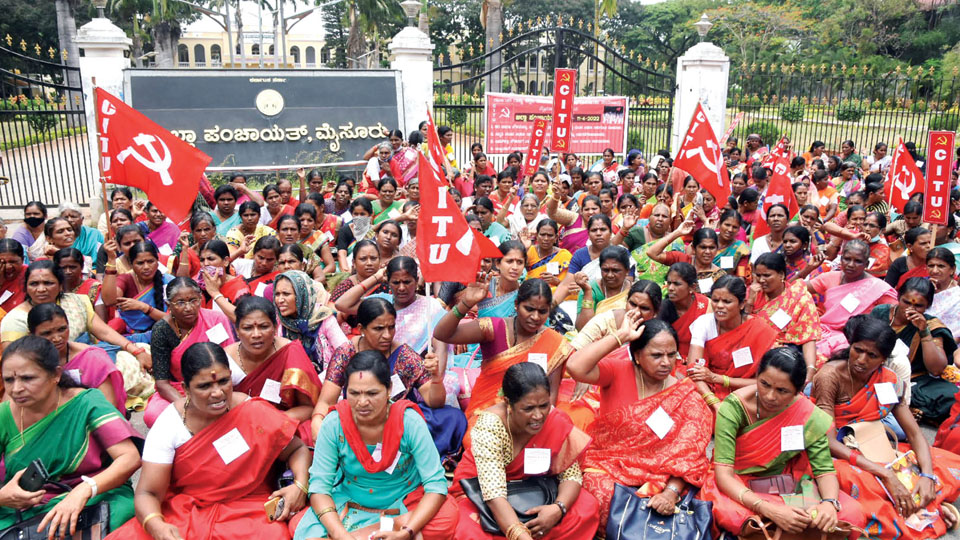 Mysore/Mysuru: Condemning the sudden decision of the Government to retire midday meal workers, who are aged 60 years, more than 100 midday meal workers from across the district under the banner of Karnataka State Midday Meal Workers Association staged a protest in front of Zilla Panchayat (ZP) Office in city this morning.

The protesters, who assembled near the Gun House Circle, took out a march, passing through Chamaraja Double Road, Ramaswamy Circle to ZP Office on Krishnaraja Boulevard, where they staged a dharna.

Condemning the action of retiring the workers aged 60 years, the protestors said that the midday meal workers who had served for more than 19 years were being sent off in a humiliating manner. They said that these workers had taken care of more than 50 lakh children across the State and were also responsible to instil interest among children on schools.

Pointing out that while joining work in 2001-02, only educational qualification and age was required and the age of retirement was not mentioned in the handbook, the protestors demanded that those who retired should be given full retirement benefits.

They also demanded that the retirement order of 31.3.2022 be changed to 10.4.2022, the hike of Rs. 1,000 in salary be implemented from Jan. 2022 itself, salaries be given on 5th of every month and not to outsource any type of works to private companies. Association Hon. President Sunanda, President K. Manjula, General Secretary Mangalamma, Treasurer Pushpa and others took part.

Giving the Government 30 days to fulfil their demands which included roll back of exorbitant fee levied by the Union Government on commercial vehicles which are 15 years old, rising diesel price, removal of border check posts and issue of permits to transport sand among others, the members of Mysore District Lorry Owners Union staged a protest near the Office of the Deputy Commissioner (DC) here this morning.

The protestors warned of launching stirs in Karnataka, Kerala, Tamil Nadu, Andhra Pradesh, Goa and Pondicherry if their demands were not met within 30 days.

Pointing out that the Central Government had decided to ban commercial vehicles which are 15-years-old and has increased the fee for re-registration and to obtain Fitness Certificate, the protestors said that they have not received any communication in this regard from the State Transport Department.

They stated that scrapping of commercial vehicles which are above 15 years would cause a lot of problems to farmers, who transport sugarcane to factories and also to single lorry owners.

Alleging that the price of diesel was being hiked on a daily basis since about 15 days, they said that it has become difficult to transport goods and earn a living. While the transportation cost has remained the same and the cost of diesel was increasing, the protestors said that the lorry owners after paying the salary of the drivers and spending on vehicle maintenance will not have a single paise with them for their day-today expenditure.

“Rules to transport sand has not been implemented and the officials have been calling meetings and wasting time. Sand has been accumulated on river banks and is entering agricultural fields, thus going waste. The Government should permit us to transport such sand which would also fetch revenue to the Government,” they said.

The members of Communist Part of India (CPI), Mysore District Council, too condemned the hike in fuel prices, LPG, electricity and other essential commodities by staging a protest in front of Dr. B.R. Ambedkar statue in Town Hall premises.

Alleging that the Centre was putting heavy load on common man by hiking the prices, the protestors said that even prices of more than 800 essential medicines have been increased and has become out of reach for middle class families. They urged both the Union and State Governments to reduce the prices and help the poor. CPI leader H.R. Sheshadri, Secretary H.B. Ramakrishna, Joint Secretaries K.S. Revanna and K.J. Somaraje Urs and others were present.