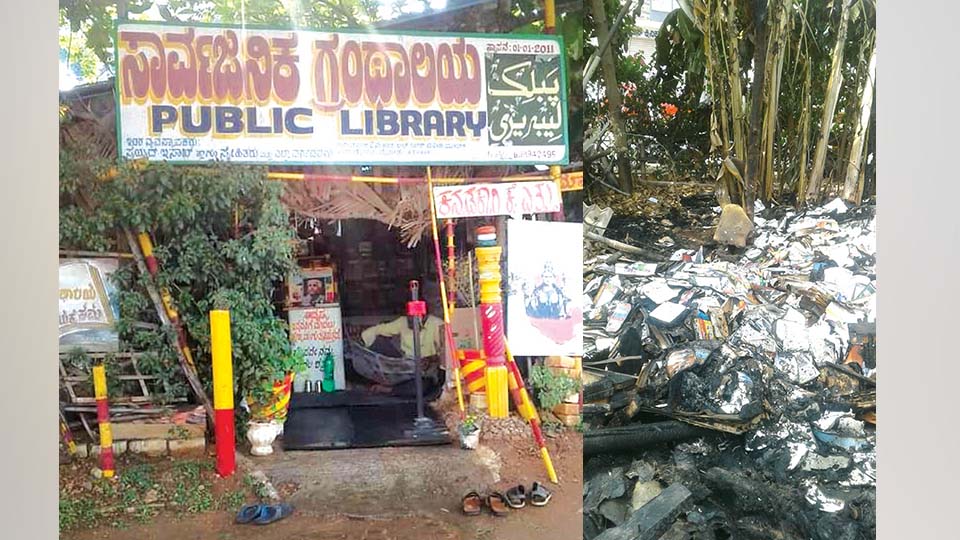 Mysore/Mysuru: A public library established in 2011 by one Syed Isak at Rajivnagar 2nd Stage was destroyed in a fire in the wee hours of today.

The library, which had over 11,000 books including Holy Scriptures and newspapers of various languages, has been charred.

Syed Isak, the 63-year-old person, who had set up this library in 2011, told Star of Mysore that he lives just 100 ft. away from the library and he was woken up by his neighbours at about 3.40 am, who informed him about the fire. Though he rushed to the library, 95 percent of it was burnt down and his neighbours were seen pouring water to extinguish the fire but in vain.

He said that apart from over 11,000 books, he used to get 18 newspapers in Kannada, English, Urdu and Tamil languages everyday.

He had also kept his awards and other documents in the library which has been burnt, he said.

He alleged that in 2014, the library was destroyed when he was admitted to a hospital following dengue and now the entire library has been burnt down. All the half-burnt books were removed from the spot by the Police in a MCC garbage transporting vehicle, he claimed.

Following a complaint from Syed, Udayagiri Police, who have registered a case, are investigating

6 COMMENTS ON THIS POST To “Public Library destroyed in fire”