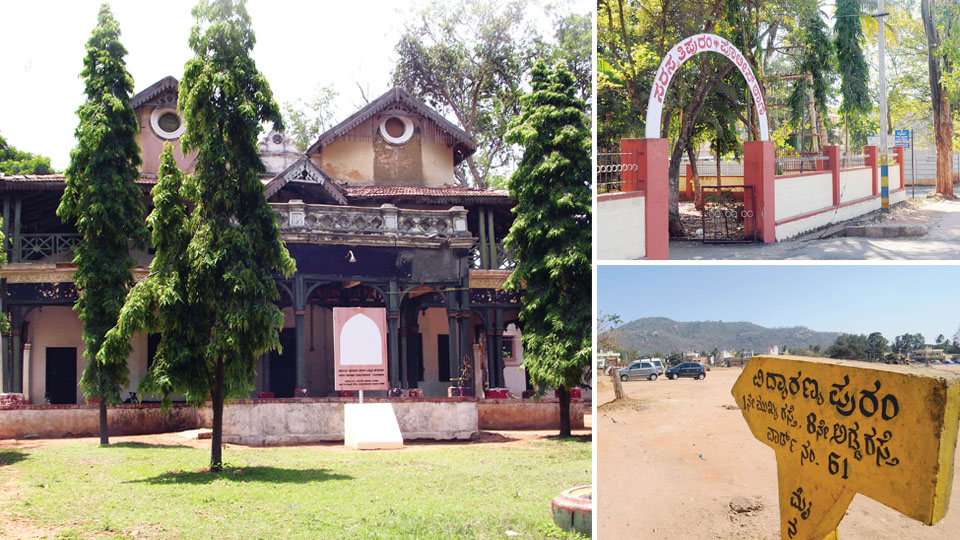 The Heritage City of Mysuru has a host of Purams like sweet slices of mango, if the whole mango fruit is considered to be Mysuru. Despite the advent of many ‘Nagars’, these Purams are one of the most loved areas in Mysuru as they have many unique structures like the Professors’ Quarters(see pic.) at Saraswathipuram. Like the ‘Mohallas’, these Purams are unique and have their own stories to narrate for a discerning listener. They have raised Mysuru’s status from a small Municipal Council into a Civic Corporation as illustrated in this Weekend Star Supplement.Mysuru: A Look at its Past…

In my previous article, I made an attempt to narrate briefly how old Mysuru city expanded from outside of its Fort with the formation of Mohallas, which included Agraharas and Keris, most of them coming up during the reign of Krishnaraja Wadiyar III (1799-1868).

In this article, I intend to explain within the limitations of space, how the city further expanded into ‘Purams’. In fact, the present ‘Purams’ were called ‘Pura’, meaning a city, when they were formed during the period of Maharaja Krishnaraja Wadiyar IV (1901-1940). Probably, his intention was a satellite township as they were formed outside the Palace Fort. ‘Puram’ is a recent usage.

Both the Mohallas and the ‘Purams’, old and new, have today become an integral part of the city, resulting in its expansion on all the four sides, raising its status from a small Municipal Council into a Civic Corporation and signs indicating a Metropolitan City status in the not too distant future.

Like the Mohallas, the villages that surrounded the old city have turned into ‘Purams’. Having merged within the city, these villages have now gone into oblivion, their names totally lost, excepting two or three which continue to be called by their old names.

Karunapura was perhaps the first ‘Pura’ to take shape. It was established by the Wesleyan Missionaries after the break out of the 1898 pestilence in Mysuru. The ‘outcasts’, who lived in Veeranagere Colony in the northern outskirts of the city needed urgent help to face the dreaded plague. The Maharaja decided to move them from the highly insanitary and infectious area to a better place by offering the poor vacant sites on the outskirts.

Rev. Holdsworth, the Wesleyan Missionary, in whose wife’s name stands the popular Holdsworth Memorial Hospital, came to the aid of the poor Christians of the Veeranagere, and secured a piece of land on which were built huts and sheds which were later substantially improved. The Christian settlement was named as ‘Karunapura’, the ‘City of Mercy’. This is how present Karunapura came into existence.

Subsequently, Lakshmipuram, Chamarajapuram, and Saraswathipuram came up. In order to decongest the unhygienic area within the Fort, Dewan Sir Mirza Ismail planned relocating the Urs’ families to the outer parts of the Fort. The residents of the small congested houses surrounding the Palace often faced pestilence like plague and cholera which took a heavy toll.

The fire that occurred during the marriage of Jayalakshammanni, the eldest Princess of Maharaja Chamaraja Wadiyar, in 1897, destroying a major portion of the Palace, further underlined the need to decongest the area. Sir Mirza, who had become Dewan in 1926, planned to clear the old and worn-out houses, which marred the beauty of the new grand structure that had come up by then, and to create open spaces with garden and convenient passages in their place.

Much to their reluctance to live away from the residence of the ruler, the rich Ursu families and noblemen moved out to ‘Lakshmipura’, a new extension that had already taken shape as early as 1884, on the western part of the city on what was old ‘Dodda Holageri, the most insanitary area and hot-bed of plague and other fatal diseases.

Though ‘Lakshmipuram’ extension had come into being without its present name, the newly formed extension around the Law Courts had already been given the name, ‘Chamaraja Pura’ by about 1914 alone. At that time, there were only two extensions identified, one was ‘Karunapura’ and the other was ‘Chamaraja Pura’.

With the shifting of the Maharaja’s College to the present building in 1893, which became the nucleus of the Mysuru University in 1916, the Maharaja saw the need to provide houses for the teachers working in the College. The Saraswathipuram was formed next to Lakshmipuram. Professors’ quarters and bungalows were built, as houses in the area. It is in these Professors’ quarters and bungalows some of the distinguished personalities like Dr. S. Radhakrishnan, who rose to the highest office of the President of India, lived.

After the construction of Lakshmipuram, those living in the ‘Dodda Holageri’ were shifted away to the present Ashoka Puram, the generous Maharaja constructing row houses for them to see that they live in hygienic conditions, unlike in the Dodda Holageri. This area was named ‘Ashoka Puram’ a few decades ago.

After Lakshmipuram, came up Chamarajapuram that was named in honour of Maharaja Chamaraja Wadiyar. Houses were built for the needs of the middle-class families in this area which linked the two areas of Lakshmipuram and Saraswathipuram, and the Mysuru-Nanjangud railway line passing between them. Chamarajapuram Railway Station and the Law Courts are the two landmarks of this area. Chamarajapuram was initially formed as Chamaraja Agrahara with 32 houses.

The Kannegowdana Koppal, after Chamarajapuram, leading towards Saraswathipuram, continues to survive with its old name as though to show how the villages surrounding the city came within expanded Mysuru. Though it bears the old name, it has lost the look of the old ‘Koppal’ as new houses and shops have sprung up in place of the old houses of the hamlet that were congesting the area.

Similar is the case with Vontikoppal on the other side. Though it has lost its identity as a village, having come within the city, it is still being identified by its original name by many, although the extension is named as Vani Vilasa Mohalla or Vani Vilasa Puram in honour of Maharani Vani Vilasa Sannidhana — so also the case with the Kumbara Koppal and Kukkarahalli Village.

As the city began to expand, Krishnamurthypuram came into existence on the southern area of the city. It is named after Dewan Krishnamurthy, and Vidyaranyapuram came up in the later years. P.N. Krishnamurthy (1849-1911) was a direct descendant of Dewan Poornaiah, the first Dewan of Mysuru. Krishnamurthy was Dewan from 1901 to 1906, during Krishnaraja Wadiyar IV.

A new extension was formed in continuation of the Vani Vilasa Mohalla called Jayalakshmipuram. It was named after Princess Jayalakshammanni, whose former bungalow, now the Folklore Museum of the Mysuru University, is located close to it. The bungalow is now part of Manasagangothri, the post-graduate extension of the Mysuru University, which came into existence during the period of Maharaja Jayachamaraja Wadiyar.

Princess Jayalakshammanni was the eldest among the three daughters of Maharaja Chamaraja Wadiyar and was married to Sardar M. Kantharaja Urs, her maternal-uncle.

The contribution of these ‘Purams’ to the cultural and educational growth of Mysuru is significant. It is in the spacious bungalows and houses of these ‘Purams’ resided many leading personalities during the golden era of Maharaja Krishnaraja Wadiyar IV.

They made immense contribution to Mysuru in one field or the other, earning respect for themselves and for the Maharaja and made Mysuru a popular royal city for which Mysureans should remain grateful. Most of them are regrettably forgotten, while a few streets or roads named after them continue to remind us of their service.

Gouri Satya Mysuru Mysuru: A Look at its Past
Echo of prasadam poisoning incident: Govt. to take over Sulwadi Temple
Natana School of Theatre Arts