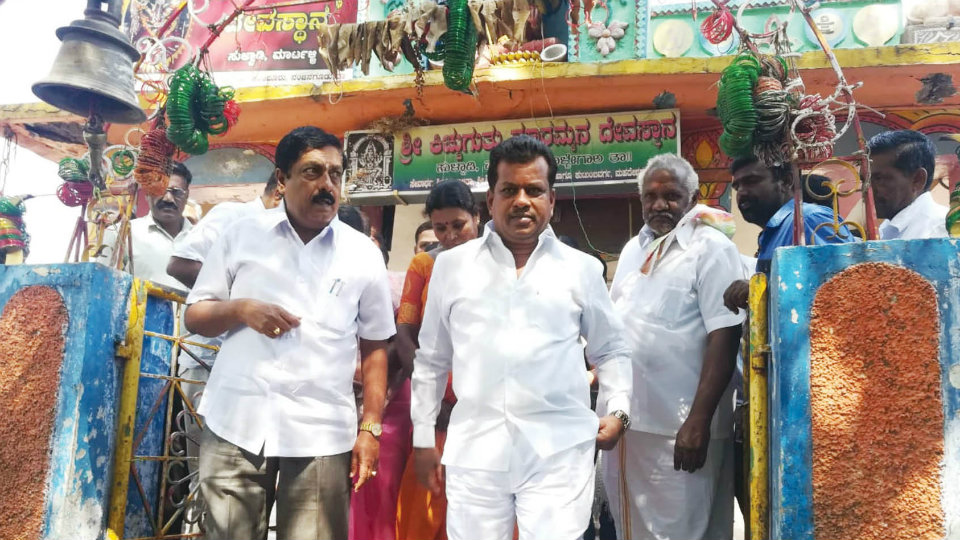 Chamarajanagar: It is final. The State Government will soon take over the Kichuguth Sulwadi Maramma Temple at Hanur Taluk in Chamarajanagar District where over 17 persons lost their lives in the incident where the temple prasadam was poisoned. The incident, where 103 persons took ill, occurred on Dec. 14 and it hit headlines, forcing the Government to take remedial measures.

Muzrai Minister P.T. Parameshwar Naik made the announcement of the Government (Muzrai Department) taking over the Temple management this morning after he visited the temple along with officials and elected representatives.

Speaking to reporters, Parameshwar Naik said that following the reports submitted by Chamarajanagar Deputy Commissioner B.B. Cauvery, the Government will take over the temple management. “As the Muzrai Minister, I am in favour of the Government take over. I will discuss the issue with Chief Minister H.D. Kumaraswamy and Deputy CM Dr. G. Parameshwara and pass the takeover order very soon,” he said.

He said that the tragic incident has triggered demands by local elected representatives for the Government to take over its affairs from the private trust in charge of its administration. He also said the Forest Department was keen on shutting the temple down or restricting its activities arguing that the temple and the Sulwadi village are located in the Male Mahadeshwara Reserve Forest area in violation of the Wildlife Conservation Act.

Forest Department officials have told the government that Sulwadi village and the Kichuguth Maramma Temple are 200 to 300 meters within the Male Mahadeshwara Reserve Forest area. “Since multiple departments are involved in this, a decision has to be taken by the CM and his Deputy,”  Parameshwar Naik said.

Chamarajanagar has many such temples that have a large number of devotees. In her report to the government, DC Cauvery has stated that there are many temples where there are disputes over the control of the temple management and the temple revenues and all of them make a fit case for government takeover.

“The DC, Hanur MLA R. Narendra, Maramma Trust members and office-bearers and the general public all want the government to take over the temple. Will pass an order in this regard soon,” Parameshwar Naik said. After his temple visit, the Minister visited the houses of the victims of the temple tragedy at Sulwadi, Bidarahalli, Korepode and surrounding areas.

Families of the victims demanded speedy justice and also stringent punishment to the accused Immadi Mahadevaswamy alias Devanna Buddhi who is the president of the temple trust, Ambika, the Secretary of the temple, her husband 46-year-old Madesha who is the manager, and priest Doddaiah Tambadi who are at present in judicial custody.

ONE COMMENT ON THIS POST To “Echo of prasadam poisoning incident: Govt. to take over Sulwadi Temple”