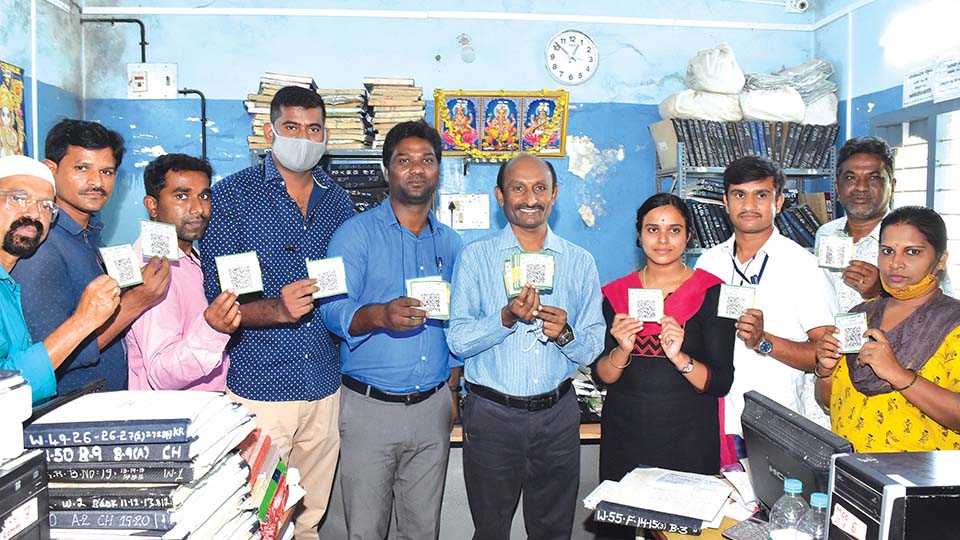 QR code allotment for properties picks up pace in city

Mysuru:  The Mysuru City Corporation (MCC) has begun its ambitious project of computing details of each and every property in city and providing Quick Response (QR) code to citizens so that they can pay tax online without visiting  Corporation Offices.

MCC officers told Star of Mysore that the QR code allotment process for commercial properties will be completed in another 20 to 25 days. Officers visiting commercial outlets and complexes are listing out the properties and are making sure that all data is in order after clicking photos from all the four sides of the  said properties.

Details about property like the total area, number of floors and usage are noted down and pictures of properties from four different angles are taken and uploaded to the newly-created application. Along with the details, tax paid receipt for the year 2020-2021 is collected and paired with RR number of electricity and water bills.

As per the Corporation records, there are 1.70 lakh properties and the number may go up once the actual QR code survey is done. Allotting QR codes to residential properties would be a massive task.

Each property has a different QR Code and scanning of code would help citizens get useful information such as water tax, property tax, trade licence and Swachh Survekshan. This would prevent people from frequenting the offices of Corporation for payment of taxes. The MCC is the first Corporation in the nation to launch this project.

Speaking to SOM on the smooth process of QR code allocation, K.G. Narasimha Bharathi, a resident of No. 483, Ramakrishnanagar I Block, said that the process was over within 10 to 15 minutes. “Officers came to my house on Dec. 24 and asked for tax paid receipt for the year 2020-2021 along with electricity bill and water bill. The details were quickly uploaded in the application and the QR code was generated and pasted on the wall (see pic). Photos of house were taken and uploaded,” he said thanking the MCC Officers for an efficient job. Narasimha Bharathi hoped to pay taxes and his power and water bills after scanning the QR code, post activation. “I am looking forward to pay taxes and bills from the comfort of my home,” he said.