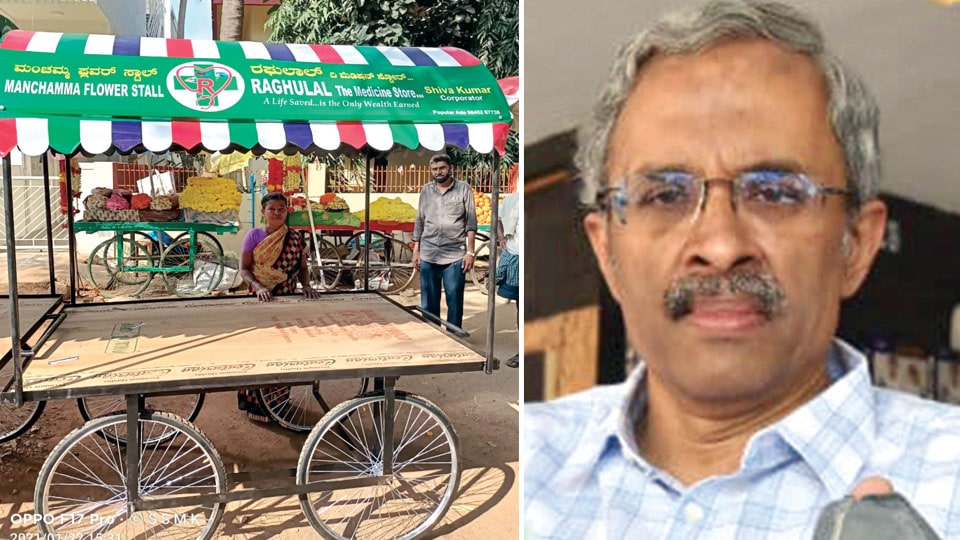 Mysore/Mysuru: N. Raghavan, a social worker, environmentalist and proprietor of Raghulal & Co., a well-known medical shop in Mysuru, has donated 22 push carts to roadside vendors who do business in rain or shine.

As many as 13 fruit-vegetable vendors, who do business in front of Sri Venkataramana Temple in Vontikoppal and nine vendors of Udayaravi Road in Kuvempunagar have been given these push carts with a canopy. Each cart has the name of the beneficiary, product sold and name of the area Corporator.

Pharmacist Raghavan has been into philanthropy for many decades without any expectations. One of them has been planting saplings and providing tree guards.

Meanwhile, there is an interesting story behind his decision to provide push carts. Sometime ago, a lady with a baby in her arms was selling flowers in front of Vontikoppal Temple on push cart. At that time, a person came there and started abusing her but she was begging with him. After that man left, Raghavan went near her to know the reason.

Then she told him that the push cart had been taken on a daily rent of Rs.25 but she has not paid for last three days due to dull business. Moved by this, he came up with the idea of distributing push carts to needy people. He has plans to distribute similar carts to street vendors near the Deputy Commissioner’s Office.