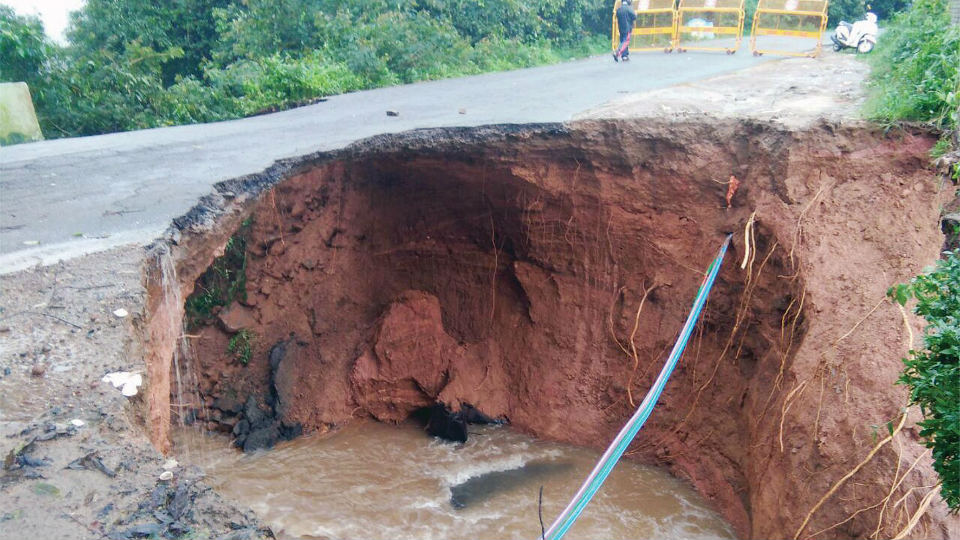 Mysuru / Madikeri: The dark clouds have opened up and it has been raining cats and dogs in Kodagu. The rain that began on July 17 has intensified, causing extensive damage to the district and normal life has been severely affected. Trees have been uprooted at many places cutting off power lines and roads have caved-in blocking the smooth passage of vehicles. Landslides too have been reported in several places.

According to District Administration officials, Kodagu has not received such a rain since the last three years and probably for the first time in recent years, the Virajpet-Makutta Road that connects the district to Kerala has been blocked as a major part of the road has caved-in near the Perumbadi Gate.

Authorities said that both the sides of the road near Perumbadi caved-in as water overflowed from a lake. The Perumbadi check-post has now been closed for vehicular traffic.

Vehicles moving towards Kerala have now been diverted via Gonikoppal, Ponnampet, Kutta to reach Manandavadi in Kerala. 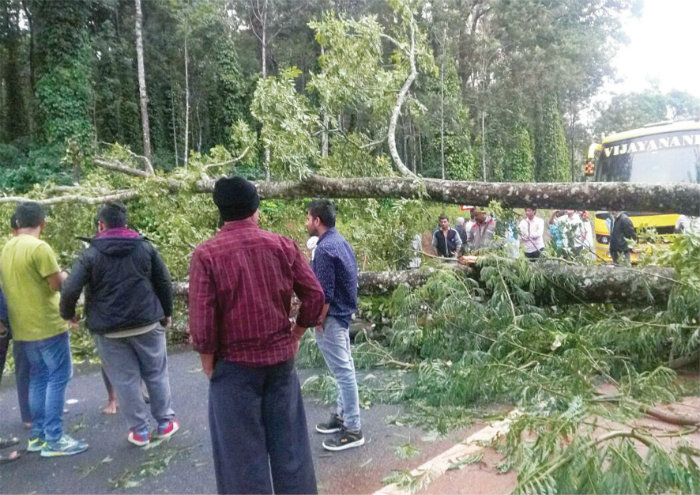 The vehicular traffic towards Kerala via Perumbadi near Virajpet and towards Bantwal via Balekadu near Suntikoppa in Kodagu were blocked this morning following the uprooting of trees respectively due to heavy rains across Kodagu.

Movement of vehicles along several roads in the district, particularly in Bhagamandala region, has been hit in view of rains and landslides. The Madikeri-Bhagamandala-Talacauvery Road has been blocked as a stretch near Ayyangeri is submerged. There, the District Administration has made arrangements of boats for the residents to cross the submerged road.

Traffic on the Mysuru-Bantwal Highway in Madikeri was blocked today as a huge tree fell at Balekadu near Suntikoppa in the wee hours of today.

Traffic on this busy Mysuru- Bantwal road was stranded from 4 am to 9 am as it took time for the residents and the administration staff to clear the trees.

Several landslides have been reported on the Madikeri-Bhagamandala stretch. As a precautionary measure, the district administration that had declared a holiday for schools and colleges yesterday continued the holiday today too. Authorities said that holidays will be declared tomorrow depending on the situation. According to reports, a private bus driver carrying 70 passengers averted a major tragedy when he saw the road that had caved-in and stopped the bus.

At Karadigodu and Nellihudikeri near Siddapur, the River Cauvery is flowing in full spate and those living on the banks of the river have been asked to move to a food and rehabilitation centre (Ganji Kendra) set up at Karadigodu Government Primary School. Over 80 families have been provided temporary shelter at the Ganji Kendra.

About 300 houses in Kondangeri village near Murnad on the banks of river Cauvery is facing the threat of inundation. Notices have been issued to Revenue Inspectors to shift the people to safer places. Many villages along the Napoklu-Madikeri Road were affected by water-logging and the Cauvery riverbed along this stretch is facing the threat of floods.

The Balamuri mini bridge has been submerged and the Cauvery water level is continuously rising in Bethri, Mutharmudi and Kadanoor. 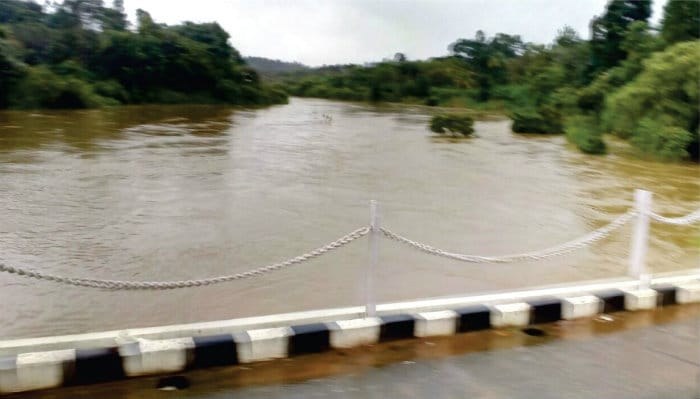 The Bethri Bridge near Murnad connecting Virajpet and Madikeri was full to the brim this morning. 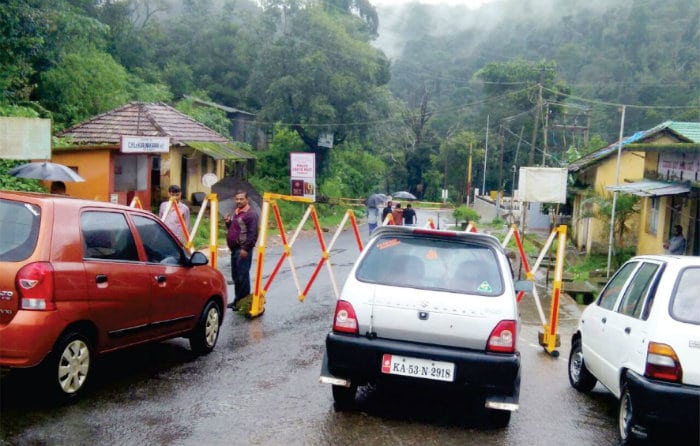 The check-post on Kerala road in Perumbadi was closed.

Kodagu
Ram Nath Kovind is the next President of India
Finally, it’s raining in Kodagu