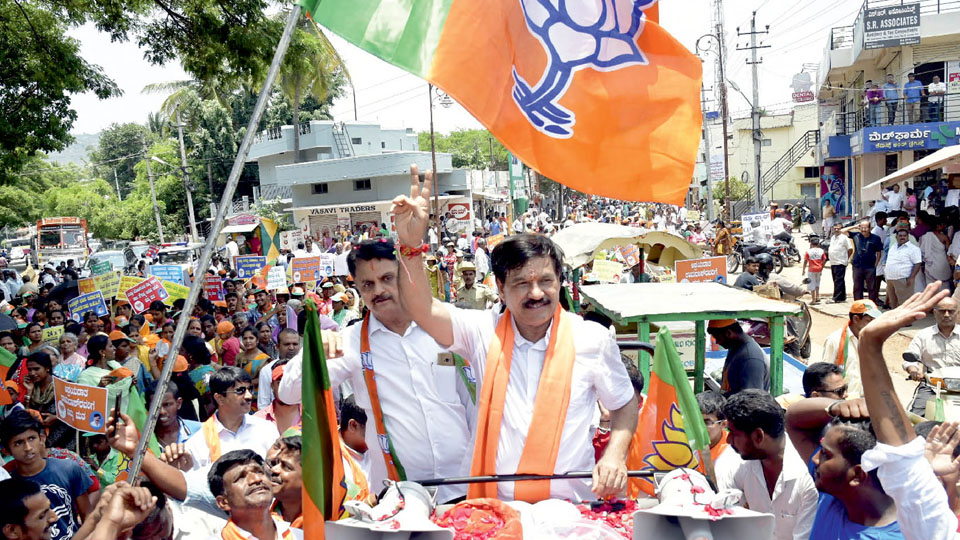 Mysuru: A day after Chief Minister Siddharamaiah and MLA G.T. Devegowda filed their nominations for the high-profile Chamundeshwari constituency amidst much fanfare, today it was the turn of former Minister S.A. Ramdas  of BJP and Abdul Azeez (Abdulla) of JD-S to file their papers from Krishnaraja (KR) and Narasimharaja (NR) constituencies respectively amidst a festive atmosphere.

Both the candidates came in two separate huge processions where thousands of people from all walks of life participated. While Abdulla’s procession dominated the Eastern parts of the city, the massive procession carried out by the supporters of Ramdas was the centre of attraction in the Southern part of Mysuru.

Abdulla and his thousands of supporters assembled at LIC Circle in Bannimantap at around 11.30 am. The group was led by a team of Disc Jockeys (DJs) and several other band sets. Abdulla, with folded hands, was on an open jeep and was greeting his supporters. The procession passed through Five Light Circle, the road behind the Government Guest House, Karnataka Police Academy, SP Office Circle and reached the Chamundi Vihar Stadium at 1 pm and Abdulla filed his papers before the Returning Officer K. Kantharaju. He was accompanied by Deputy Mayor M. Indira and leaders including Puttaraju and Mohammad Sharief.

Former Minister and BJP Leader S.A Ramdas performed pujas along with his supporters at Ramalingeshwara Temple at Vidyaranyapuram and took out a procession that traversed through Chamundipuram Circle, Nanjumalige, Madhavachar Road, 101 Ganapathi Temple, Agrahara Circle, and Sanskrit Patashala and reached the MCC Office to file his papers at 2.15 pm.

His procession was led by folk and cultural troupes and musical groups. Performers including Chande Vadya, Veeragaase, Dollu Kunitha, and Kamsaale danced all along the procession. Interestingly, hundreds of pushcarts carrying vegetables, coconut, potato, Pani Puri and other street foods marched along the procession. There were more women than men in the procession.  Addressing the voters of his Krishnaraja constituency, Ramdas said that he was filing his nominations from Krishnaraja for the sixth time. “I came to the area and stayed in a small room by paying a rent of Rs. 10. You have supported me and made me a Minister. I will never forget you and I am indebted to you,” he said.

He claimed that if elected, he will provide own houses to all the 23,666 people in the constituency who are living in rented houses. “I have the support of BJP leader H.V. Rajeev and I have already visited his house yesterday and sought his support. Ramdas filed his papers before Returning Officer Mohammed Zubair at 2.15 pm.