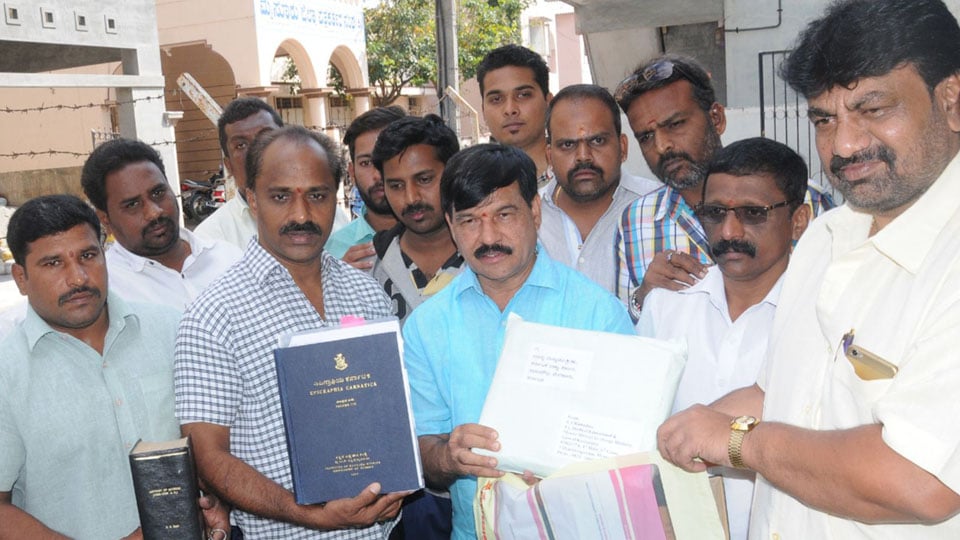 Mysuru: Countering Chief Minister Siddharamaiah’s statement that those who oppose Tipu Jayanti do not know the history, former Minister S.A. Ramdas has sent a copy of B.L. Rice’s Epigraphia Carnatica Volume 6 to the CM where the atrocities committed by Tipu Sultan in Kodagu, Srirangapatna and Melukote have been documented.

Despatching a copy of Epigraphia Carnatica to the Chief Minister, Ramdas said that it was Siddharamaiah who is speaking on Tipu Sultan without knowing the history and was indulging in vote bank politics. “We are sending Epigraphia Carnatica to give some knowledge to the CM so that he will desist from celebrating a Jayanti of a tyrant,” Ramdas said.

Speaking about Epigraphia Carnatica, Ramdas said that Tipu had inflicted serious wounds in the minds of the people of Coorg and he is a villain as far as Coorg history is concerned. That is precisely because in the eyes of the people of Coorg, Tipu is cruel, criminal, selfish and an opportunist who indulged in forced conversion.

On careful examination of the Indian history, Tipu may be compared with Aurangzeb who was a religious bigot. During his 17 years of rule, Tipu caused irreparable damage to Hindu temples and also converted Hindus to Islam much against their wish. These incidents have been documented in Epigraphia Carnatica, Ramdas said.

With the alliance of Maratha and Nizam of Hyderabad, the British invaded Mysore province from different directions. As a result, Tipu was forced to leave Bangalore and retreat to the fort of Srirangapatna.  Ultimately he had to surrender in 1792. In order to avenge his defeat and get back those provinces which he had lost, he had to win the sympathy of local Hindus. This is the reason he gave grants to many Hindu temples including Sringeri Sharada Peetham and Sri Ranganathaswamy Temple at Srirangapatna, Ramdas claimed citing passages from   Epigraphia Carnatica.