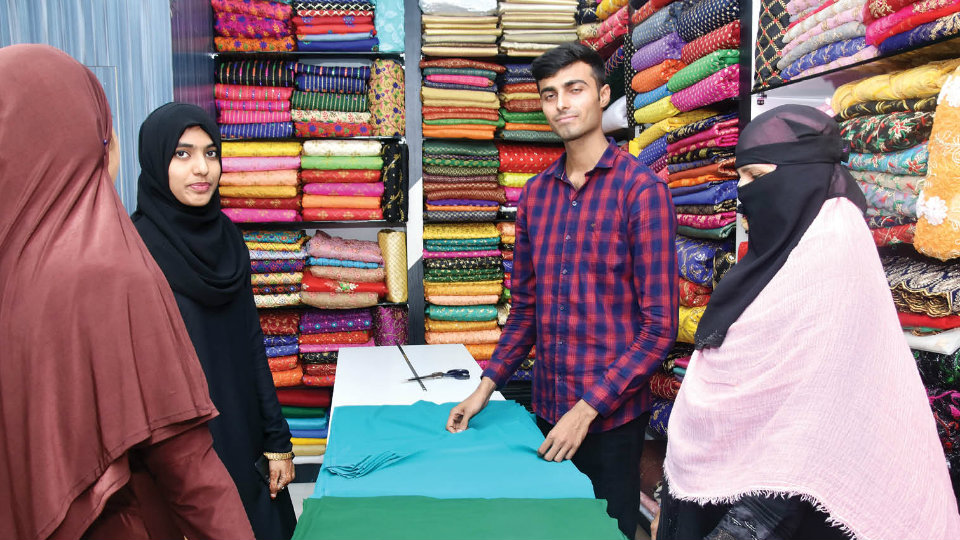 Mysuru: In a city with no shopping destinations open through the night, Ramzan’s special bazaars pull crowds and shoppers in hordes.  Though there are no malls, no nightclub, and no fine dining that are open all through the night on other regular days, on the special occasion of Ramzan, some streets were open late into the night.

Shops in Mandi Mohalla, Meena Bazaar and Devaraja Urs Road were open two days before the grand finale of the holy Ramzan month and people were seen setting out of their homes after 11 pm to shop or grab a bite at smoky street corners where piping hot snacks and other lip-smacking non-vegetarian dishes were up for grabs.

Shoppers crowded before outlets at Meena Bazaar and Devaraja Urs Road to purchase their favourites including Semia, Dates of different varieties, dry and fresh fruits. Some people indulged in last-minute shopping for the big day (June 5) and even the shopkeepers obliged and were in no hurry to close their shops. From new clothes and footwear to bangles, mehndi, ‘attar’ (natural perfumes), crockery, household items and vermicelli and dry fruits, they buy everything.

With well-to-do families paying ‘Zakat’ (Islamic wealth tax of 2.5 percent on their cash and other valuables) and almost every family paying ‘Fitra’, the poor also join the festivities by buying clothes and other items.

On Devaraja Urs Road, however, the Police asked shops to down the shutters after midnight. According to Devaraja Inspector Srinivas, they found a few shops that were open beyond midnight on Urs Road and they were asked to close.

Meanwhile, on the eve of Ramadan, Forum Centre City Mall was open from 10 am to 12 am from May 31 to June 4. Called Ramadan Midnight Souk, the Mall offered shoppers time till midnight to shop and gave away rewards too.

Speaking to Star of Mysore, Abu Salim, proprietor of ‘Fashion Choice’ on Devaraja Urs Road said that only some shops were open late into the night. “On Tuesday night, almost 90 percent of the shops were closed. Though we were open till midnight, business remained lacklustre when compared to the business we made last year,” he said.

“Ours is a new shop when compared to others. We had a good business of dates, dry fruits and other eatables. People came in large numbers in the night to purchase goods from us,” Santhosh of ‘Neva Fruit Shop’ on Devaraja Urs Road said.

Shahid Khan of ‘Just K Fashion’ at Meena Bazaar said that his shop was open beyond midnight two days before Ramzan and business was good. “More than Muslims, other community members purchased a lot of cloth materials especially gowns and Ghagra materials. We made a business of Rs. 60,000,” he said.