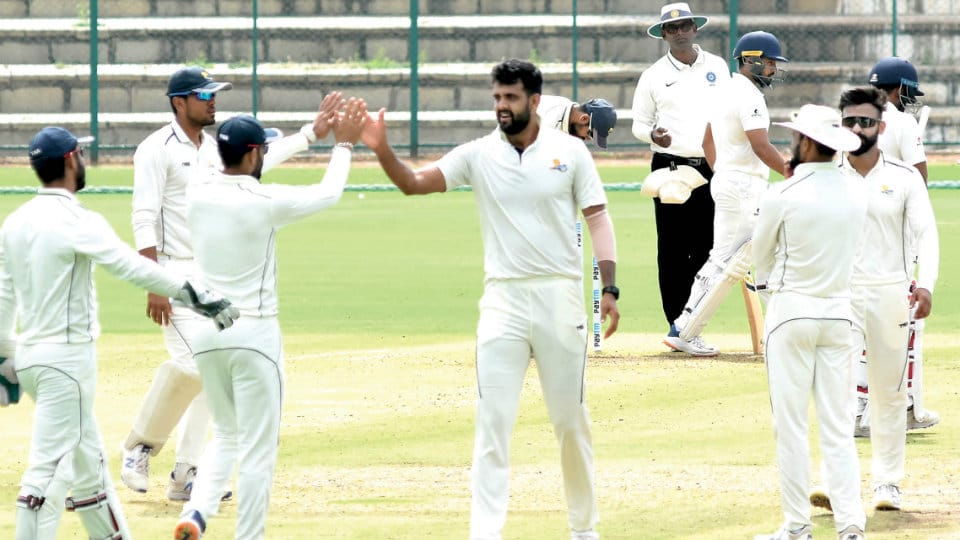 Karnataka strikes back with medium-pacers

Karnataka came back into the game fighting reducing Himachal Pradesh to 29 for three in 17 overs, before their dismal show with the willow in the first innings when they were bowled out for 166, on day one of the four-day Elite Group Ranji Trophy encounter at the SDNR Wadiyar Platinum Jubilee University Grounds here yesterday.

Batting first, Karnataka were in trouble from the start, when Himachal Pradesh’s medium pacer Kanwar Abhinay playing his first 1st Class match after two-years, struck in the first ball of the match, when opener Mayank Agarwal, slashed at one out-side off-stump to be gobbled up by wicket-keeper Ankush Bains.

Devdutt Padikkal (0), flicked one straight to the square-leg fielder and R. Samarth (4), played across and was leg-before to medium-pacer Kanwar Abhinay. Karnataka was in trouble at 10 for three. Nischal (16), after a sedate innings, was leg-before to Rishi Dhawan (4-30). Skipper Karun Nair and Shreyas Gopal batted comfortably and added valuable 56-runs for the fifth wicket, before Shreyas (27) departed shouldering arms to pacer Vaibhav Arora.

Skipper Karun Nair batted freely and executed some sweetly timed cover, off and on-drives in front of the wicket. Karun and Mysuru lad J. Suchith (10) and later Abhimanyu Mithun (21) added valuable runs to the score, before Suchith and Mithun fell. Running out of partners, Karun Nair (81, 185b, 8×4) attempted a pull shot, but could not clear the deep-mid-wicket fielder. Karnataka was bowled out for 166 in 67.2 overs.

Medium-pacer Kanwar Abhinay impressed for Himachal by taking five for 37. Dhawan three for 27 and Vaibhav Arora two for 41 lent him good support.

Medium-pacers V. Koushik and Prateek Jain struck vital blows to the Himachal Pradesh’s top order by sending back key batsman in Prashanth Chopra and Ankit Kalsi and reduced the side to 29/3 in 17 overs.

Due to the Solar Eclipse from 8.04 am to 11.05 am, the second day’s play today (Dec.26) began at 11.15 am and an interesting day’s play is in the offing with both the teams competing hard to gain the first innings lead.